Legacy magazine catches up on cover-up with major investigation

Establishment media outlets suddenly are reporting the Biden family influence-peddling enterprise 18 months after the election. And now, with attention on COVID-19 receding, a legacy magazine is alerting its readers to the long-available evidence of Dr. Anthony Fauci’s efforts to undermine the theory that the pandemic originated in a lab in Wuhan, China.

Vanity Fair reported – based on an analysis of more than 100,000 documents – that as investigations into the origin began, Fauci faced the problem of having granted millions of dollars to zoologist Peter Daszak’s EcoHealth Alliance to engage in dangerous gain-of-function research on bat coronaviruses, including at the Wuhan Institute of Virology.

WATCH: Tucker Carlson calls out Flip Flop Fauci after he once spoke positively about natural immunityhttps://t.co/CclfwO77vd

The magazine’s investigators found that Fauci quashed evidence supporting the lab leak theory after Daszak published a highly influential letter in February 2020 in the prestigious British medical journal The Lancet. The letter, without disclosing Daszak’s clear conflict of interest, marginalized the lab leak possibility as a debunked conspiracy theory, signaling to media that only tin-foil hat investigators and journalists would pursue that line of inquiry.

The NIH, Vanity Fair noted, had issued a $3.7 million grant to Daszak’s EcoHealth Alliance. The nonprofit then issued the Wuhan Institute of Virology nearly $600,000 in sub-awards before the NIH, under President Trump, suspended the grant in July 2020 due its possible connection to the pandemic and the apparent violation of an Obama-era moratorium on gain-of-function research. 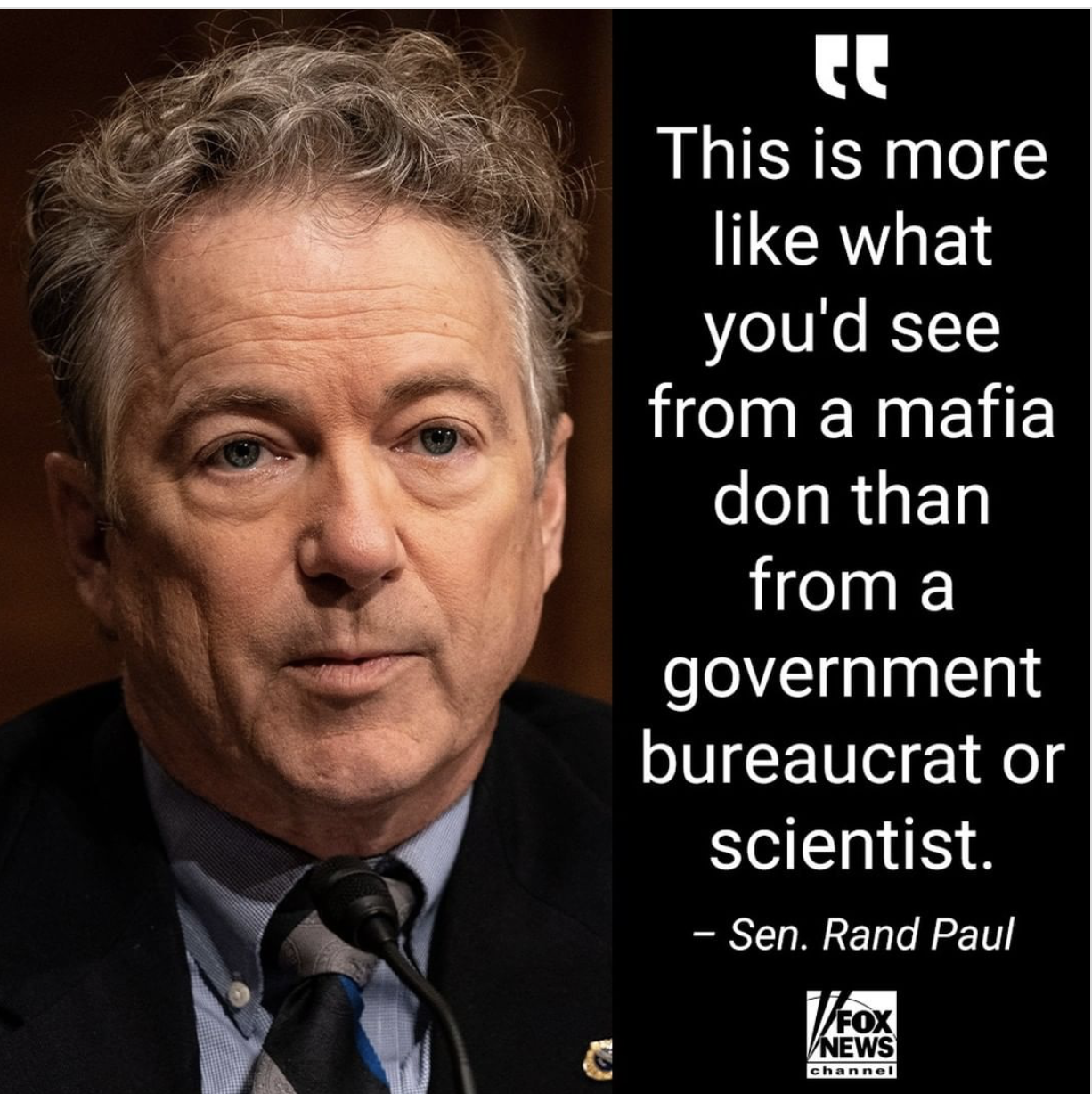 Foxnews ‘THEY WILL DO ANYTHING’: Sen. Paul calls out ‘alarming’ behavior from Fauci and his followers, suppression of lab leak theory. Link in bio.

In 2016, amid a moratorium imposed by the Obama administration on new funding of gain-of-function research, Daszak and EcoHealth sought to make SARS viruses more virulent or transmissible, insisting the research was exempt from the moratorium because the strains used had not previously been known to infect humans.

The research was to be led by “bat lady” Professor Zhengli Shi at the Wuhan Institute of Virology  under a compromise agreement with the NIH in which both parties would disclose “concerning developments involving the lab-constructed viruses.”

“This is terrific! We are very happy to hear that our Gain of Function research funding pause has been lifted,” Daszak said in an email to an NIH officer.

‘Loaded’ language
Significantly, the Vanity Fair investigation shows NIH Director Francis Collins and Fauci took actions to shut down inquiry into the lab leak as might be expected of an agency that found a way to continue funding banned research that could have been the cause of a world-altering pandemic blamed for the deaths of millions of people.

In June 2021, for example, biologist Jesse D. Bloom confronted Fauci with a preprint of a paper showing that early genomic sequences of SARS-CoV-2 – a key to discovering the origin of the pandemic – had been deleted from NIH databases at the “request of researchers in Wuhan.”

Fauci and Collins then organized a Zoom meeting with the biologist to discuss his findings. The NIH invited four others scientists, biologist Kristian Andersen and virologist Robert Garry. Bloom invited biologists Sergei Pond and Rasmus Nielsen to attend the call.

Fauci objected to the Bloom study’s description of Chinese scientists “surreptitiously” deleting the sequences, insisting the word was “loaded and the reason they’d asked for the deletions was unknown.”

As early as February 2020, Fauci, Andersen, Garry and other scientists were holding confidential discussions, Vanity Fair reported, in an effort to “enshrine the natural-origin theory” even though “several of them privately expressed that they felt a lab-related incident was likelier.”

As WND reported, a Jan. 31, 2020, email Fauci received from Anderson and three other top virologists shows there was strong evidence the virus was engineered in a lab. But after a teleconference the next day with Fauci to discuss the virologists’ conclusion, Anderson began dismissing the lab-leak possibility as among “crackpot theories” that “relate to this virus being somehow engineered with intent and that is demonstrably not the case.”

In April 2020, Fauci was asked by a reporter during a White House briefing if the research at the Wuhan lab might be responsible for the pandemic. Fauci insisted a “group of highly qualified evolutionary virologists” had concluded the virus was “totally consistent with a jump of a species from an animal to a human.”

The next day, Daszak emailed Fauci, thanking him for
“publicly standing up and stating that the scientific evidence supports a natural origin for COVID-19 from a bat-to-human spillover, not a lab release from the Wuhan Institute of Virology.”

“From my perspective, your comments are brave, and coming from your trusted voice, will help dispel the myths being spun around the virus’s origins,” Daszak wrote to Fauci on April 18, 2020.

‘A lack of transparency’
As WND reported last September, the COVID-19 origins task force affiliated with The Lancet disbanded because of its connection to Daszak, who had chaired the panel before recusing himself from that role in June because of his clear conflict of interest. Daszak, in addition, was the sole U.S. representative on a World Health Organization panel that concluded the coronavirus pandemic had a natural origin.

The Lancet task force member who succeeded Daszak as chairman before disbanding the panel, Columbia University economist Jeffrey Sachs, told Vanity Fair there has been “a lack of transparency” in the investigation of the origin. He called for an “independent scientific investigation” of the possible role of the NIH, EcoHealth, the Wuhan Institute of Virology and a partner laboratory at the University of North Carolina run by Dr. Ralph Baric.

‘I have always kept an open mind’
Fauci, in an interview with the BBC this week, was asked how he “could be so certain, so early on” that the pandemic had a natural origin, when he “knew so little about the virus.”

“Well, I was never certain so early on,” Fauci replied. “I have always kept an open mind. But when you look at the circumstances of the evolution, the similarity between [SARS-CoV-2] and SARS-CoV-1 from 2002 and 2003, I said – as did many other virologists who are very experienced in that – that the most likely edeology was a jumping species from an animal to the human.

The BBC presenter then brought up the Daszak’s now-retracted letter in The Lancet in February 2020 ridiculing anyone positing  the lab leak theory as a conspiracy theorist.

“Was the scientific community too quick to dismiss the possibility that it could have come from a laboratory?” she asked.

“Well, I don’t think they were dismissing it,” Fauci said. “I think it’s been misinterpreted. Everyone has always kept an open mind.”

But Daszak and the 26 other scientists boldly stated in the letter: “We stand together to strongly condemn conspiracy theories suggesting that COVID-19 does not have a natural origin.”

The scientists then published a March 17, 2020, article in the journal Nature Medicine that stated, “Our analyses clearly show that SARS-CoV-2 is not a laboratory construct or a purposefully manipulated virus.”

But last September, The Lancet published a letter from 16 scientists that essentially condemned the two letters, charging the missives had “a silencing effect on the wider scientific debate, including among science journalists.”

See Fauci’s remarks to the BBC about the pandemic origin:

EDITOR’S NOTE: Last year, America’s doctors, nurses and paramedics were celebrated as frontline heroes battling a fearsome new pandemic. Today, under Joe Biden, tens of thousands of these same heroes are denounced as rebels, conspiracy theorists, extremists and potential terrorists. Along with massive numbers of police, firemen, Border Patrol agents, Navy SEALs, pilots, air-traffic controllers, and countless other truly essential Americans, they’re all considered so dangerous as to merit termination, their professional and personal lives turned upside down due to their decision not to be injected with the experimental COVID vaccines. Biden’s tyrannical mandate threatens to cripple American society – from law enforcement to airlines to commercial supply chains to hospitals. It’s already happening. But the good news is that huge numbers of “yesterday’s heroes” are now fighting back – bravely and boldly. The whole epic showdown is laid out as never before in the sensational October issue of WND’s monthly Whistleblower magazine, titled “THE GREAT AMERICAN REBELLION: ‘We will not comply!’ COVID-19 power grab ignites bold new era of national defiance.”

One thought on “Is this the end for “I am the science” Fraudci ?”