Malcolm Roberts is an outstanding Australian who doesn’t shy away from calling out the fraud of the “consensus science” and the complicity between the Pharma Mafia & the Canberra ruling class.

The evidence continues to mount that these vaccines do not deserve the continuing provisional approval given to them by the TGA. Concerns about possible adverse side effects are too big to ignore any longer, especially after my COVID Under Question inquiry which you can watch by clicking here.

As a servant to the people of Queensland and Australia, tonight I’m speaking on this parliament’s therapeutic response to COVID-19 and the horrific medical harm and loss of life in that response. Last week, leading Australian parliamentarians came together in an event I organised called COVID Under Question to present documented evidence and victim testimony proving a catastrophic failure of Australia’s regulatory framework. COVID vaccine injuries are hidden behind anonymous government data, while supposed COVID virus harm is splashed across prime time. The very least we can do for the victims of COVID vaccines is to say their names—victims like Caitlin Georgia Gotze, a healthy and vibrant 23-year-old studying at Griffith University to become a vet while working as a horse strapper. Caitlin dropped dead at work of a heart attack following a second Pfizer shot. Her death was recorded as asthma, a condition Caitlin had never had. Reginald Shearer, a formerly healthy fit and active man, quickly went downhill and passed away from effects that began after receiving the AstraZeneca vaccine. Daniel Perkins, a 36-year-old healthy father from Albion Park, died of a heart attack in his sleep following his second Pfizer injection. Douglas James Roberts died after taking AstraZeneca. His family are concerned that his GP didn’t warn him of the side-effects of the vaccine. In other words, no informed consent was obtained. Neurosurgeons at the Royal Brisbane and Women’s Hospital attributed his death to a stroke, despite no family history and a clean bill of health. They refused to report his death to the TGA—refused!

The Australian Health Practitioner Regulatory Agency, Ahpra, has been bullying medical practitioners into not reporting or even for talking about the harm they’re seeing. The TGA erased 98 per cent of the 800 vaccine deaths—98 per cent erased!—that physicians reported. The TGA did so without autopsy or suitable consideration of all the patient medical data. TGA, ATAGI and Ahpra are the three monkeys of the pharmaceutical industry: hear no evil, see no evil, speak no evil.

Section 22D(2) of the Therapeutic Goods Act 1989 requires the Secretary of the Department of Health to ensure the quality, safety and efficacy of the vaccines were satisfactorily established for each cohort for which the provision of approval is being granted. Data recently revealed in court papers in the United States clearly shows that vaccine harm was apparent in the clinical trials that Pfizer, BioNTech and others conducted. This information, if ATAGI had bothered to ask for it, should have resulted in a refusal of the application for provisional use. No data was provided to the secretary regarding individual test subjects—technically, anonymized patient clinical data. No independent analysis of the fundamental issues surrounding novel mRNA vaccines was conducted in Australia—none in Australia! Instead, the secretary took Pfizer, AstraZeneca and Moderna’s word for it.

This is who the Liberal-Nationals, Labor and Greens—our very own pharmaceutical lobby—want to pay more money to. That’s not on the basis of extensive local testing and inquiry, it’s simply on the basis of taking pharmaceutical companies safety assurances. There’s no testing. It’s an assurance made easy by indemnity against any damage that the vaccines cause. What deceit! What criminal incompetence! The Labor Party and the Liberal-National Party have accepted $1 million each from the pharmaceutical establishment in this election cycle alone. Billions more are being set aside in this week’s budget to pay the pharmaceutical companies to keep the COVID-19 gravy train going. What great value this parliament provides for those electoral donations.

Mention should be made of the TGA’s decision to ban safe, fully approved and widely accepted alternatives to COVID-19 vaccines. This includes hydroxychloroquine and ivermectin; vitamins, minerals and natural antivirals; as well as proven messaging around healthy eating and lifestyles. The decision to ban proven, safe, affordable and accessible alternative treatments that are working around the world was taken to ensure the fastest and widest-possible adoption of the vaccines. The TGA’s own customers fund the TGA. That means pharmaceutical companies fund their own product’s approval. That fails the pub test. Where are the checks and balances? There are none.

At what point do we consider the actions of the TGA, ATAGI and the Australian Bureau of Statistics as interfering with the operation of the Senate? Peer-reviewed and soon-to-be-published data that must require the secretary to cancel the provisional approval of the vaccines has been released from outside of the government.

Vaccine-derived RNA can be reverse transcribed, leading to possible integration into the human genome, which the TGA denies, based only on pharmaceutical companies telling them to deny it. Internal Pfizer data released in February indicate they accept 1,272 different adverse vaccine events, including paralysis and death. German and US insurance actuarial data suggests the TGA’s database of adverse event notifications is underreporting side effects ninefold. Freedom of information documents from 2018 show the TGA keeps two databases of adverse event notifications: one internal, showing all reports of harm; and one public, showing only a part of those. This means vaccine harm is most likely significantly higher than reported.

Without honest and accurate data, the Senate has no way of deciding how much harm is too much harm. German pathologists describe pathological aggregates of spike proteins and lymphocyte infiltrations in inflamed organs in autopsies related to death post vaccination. In response, the TGA is failing to conduct autopsies on the 800 Australians the patients’ own doctors have reported as having died from the vaccines. What the hell is the TGA hiding?

Whistleblowers to the British Medical Journal provided reports of inadequacies, irregularities and possible fraudulent practices in the Pfizer vaccine trial—you know, the same trial for which the TGA took Pfizer’s word. From a modern immunological perspective, two frequent vaccines for respiratory viruses run the risk of desensitising the immune responses to the virus, and that leads to hypoimmunity and worse illness than without the immunisation. To put that simply: repeated vaccination is doing more harm than good.

These are the matters I sought today to refer to the Senate Select Committee on COVID-19 without success. I thank Senators Hanson, Abetz, Rennick and Antic for their support, integrity and courage. The truth is the Select Committee on COVID-19 has been running a protection racket for the pharmaceutical industry, and today’s vote proves it. This unprecedented betrayal of the Australian people must be referred immediately to a royal commission. To the Prime Minister, the health minister, the federal health department and all those in the Senate and the House of Representatives—all of you who have perpetrated this crime—I direct one question: how the hell do you expect to get away with it? We’re not going to let you get away with it. We won’t let you get away with it. We are coming for you. We have the stamina to hound you down and we damn well will.

The failure of the injections is blamed on the people who refused to be lab rats.

Dr. Zelenko has saved thousands of lives through his Z-Stack protocol, and has recently launched Z-DTox which he advises will help prevent blood clots, and help protect those with a compromised immune system, including those who have been vaccinated.

To order Dr. Zelenko’s products today, visit the below link, and use referral code MARIAZEEE for 5% off your order:

Australian QLD Senator Malcolm Roberts discusses the danger we are in as a nation.

We discuss the damning letter he wrote to our Prime Minister Scott Morrison, the lack of response, Scott Morrison’s involvement in the agenda and many others in government.

A multi-angled battle requires effort from every front. We are grateful to still have those in Parliament like Senator Malcolm Roberts who are aware of the agenda and are fighting for us.

If you would like to support Zeee Media to continue getting the truth out, you can donate via this link:

Website for all of my interviews and other helpful resources: 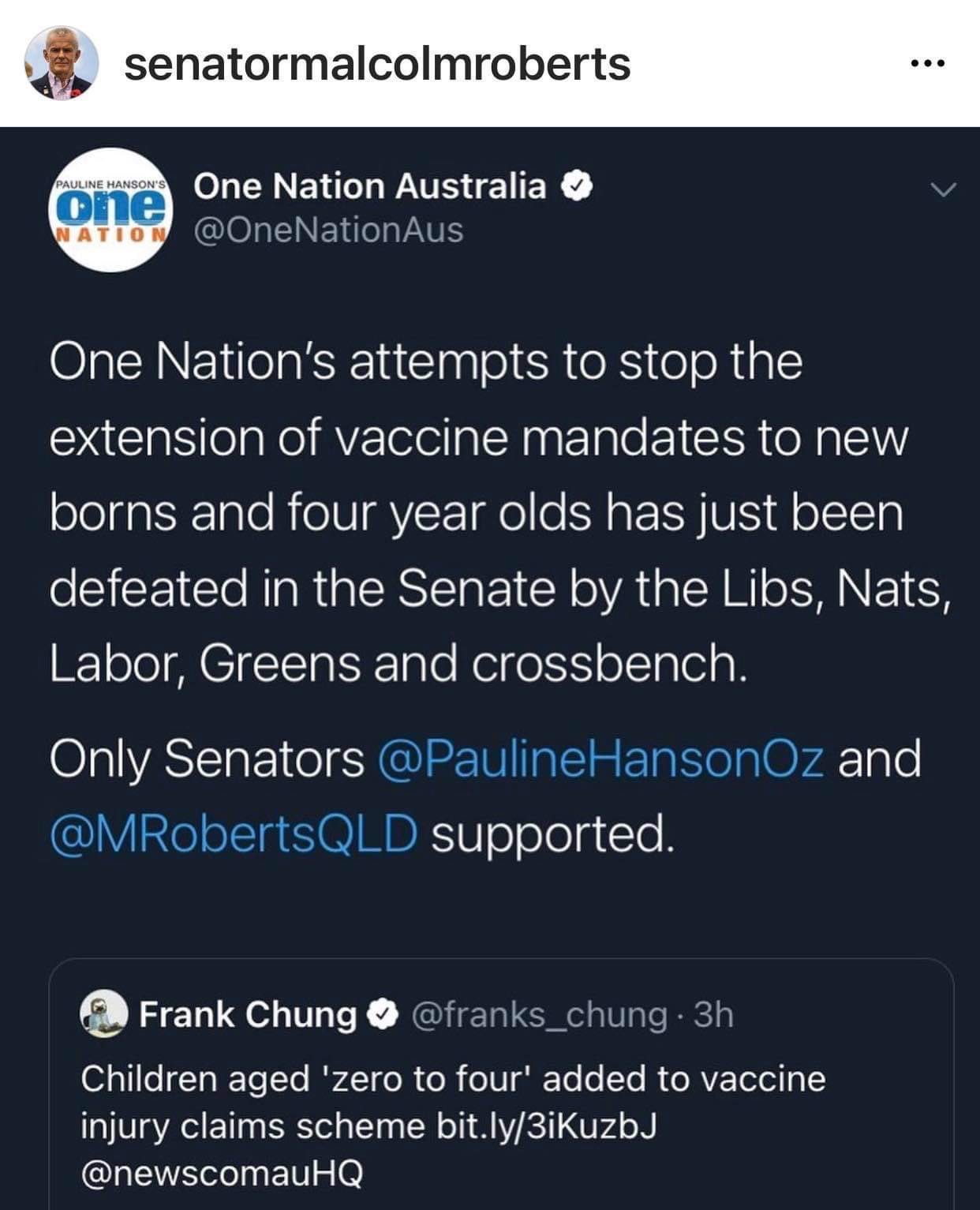