Melbourne is a commie stronghold.

Craig Kelly got egged at a United Australia Party event in Melbourne – yells back “you’re a disgrace to our democracy” pic.twitter.com/nYC0XNIL4Y

Chaotic scenes have played out at an event in Melbourne after a furious woman egged controversial MP Craig Kelly, branding him a “Nazi lover”. 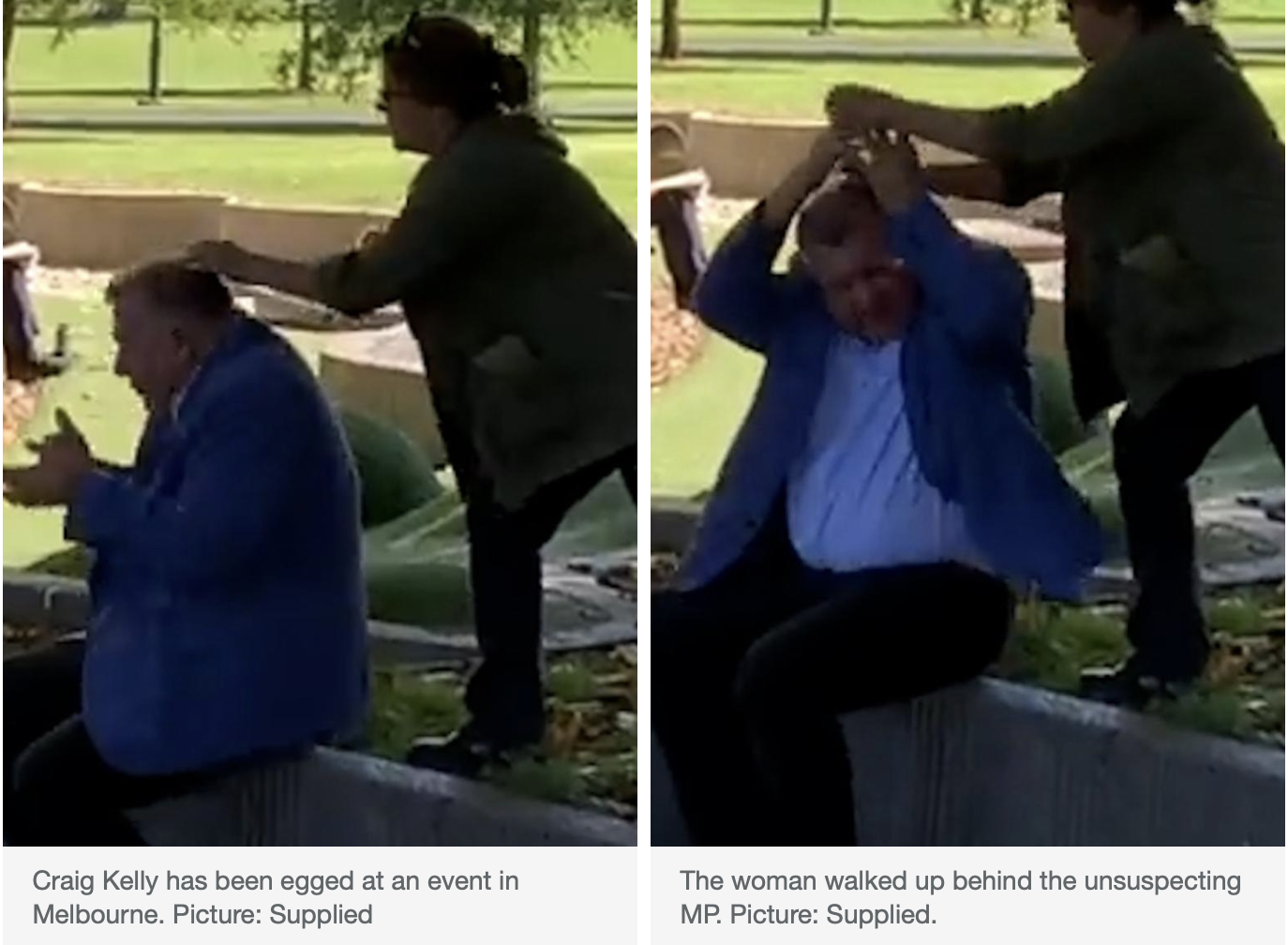 Police are investigation after furious member of the public cracked an egg on the head of controversial MP Craig Kelly in Melbourne, branding him a “Nazi lover”.

The United Australia Party leader was attending a campaign event in Melbourne on Friday afternoon when the incident occurred.

Footage uploaded to Twitter shows a woman walking up behind Mr Kelly before cracking an egg on the top of his head.

She then backs away, telling him to “Stop hanging out with Nazis”, before throwing another egg at the MP.

Victoria Police confirmed they are investigating reports that a 58-year-old man was assaulted in Fawkner Park, South Yarra on Friday.

“It was understood two women were involved in an incident where eggs were smashed onto the man’s head at Fawkner Park about 1.25pm, before running to a vehicle which was believed to be waiting nearby,” Victoria Police said.

“The man, from NSW, was not injured.”

A witness on a bicycle reportedly follow the women before parking his bike in front of their car.

“It is alleged the male driver ran over the cyclist’s foot. He sustained minor injuries,” police said.

“The cyclist then followed the vehicle, which stopped nearby on Toorak Road. The driver gave his details to the cyclist.”

The driver and two women then left the scene in the car.

Investigators are working to determine the identity of those involved in the incident.

Anyone who witnessed the incident or has information is urged to contact Crime Stoppers on 1800 333 000.

Commentary on the incident is starting to flow in, with the video already being widely circulated online.

“This is not okay, and shouldn’t be the type of behaviour anyone applauds,” he wrote on Twitter.

“Disagree with the man, by all means. God knows I do. But prove him wrong with facts; and get your payback by not voting for him.”

Swinburne University social media senior lecturer Dr Belinda Barnet noted the situation had “shades of Fraser Anning”, referring to the incident where the former Queensland senator was egged by teenager Will Connolly in 2019.

“I don’t think that throwing eggs (or throwing anything) at people is the right way to protest right-wing politics, but it seems to be a Melbourne thing,” Dr Barnet said.

The Saturday Paper journalist, Andy Hazel said: “Craig Kelly egged in Melbourne before egger is shooed away by woman in a nice dress in a display of absolute Karen-age.”