You probably haven’t heard about this on the news…

There’s been massive riots in Sweden for 3 days now.

Loads of cars have been set on fire, they attacked police with rocks, they hijacked a police car and drove it around the city.

It’s mayhem. Where is the media? 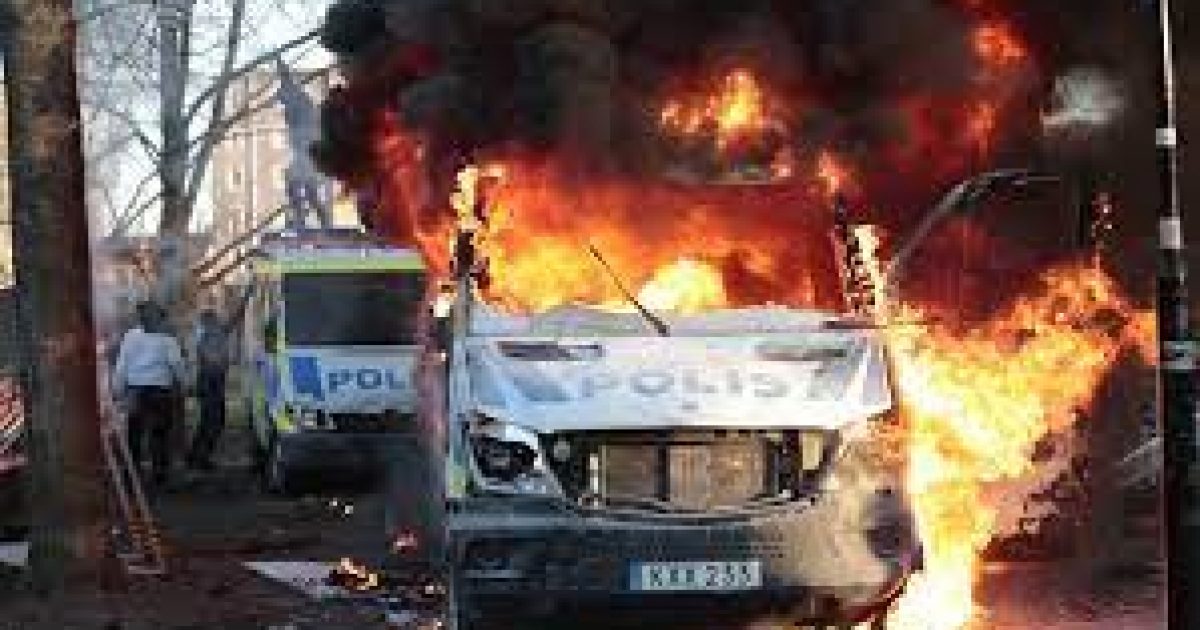 “Our actions have shown that freedom of speech and freedom of peaceful assembly no longer exists in Sweden. Now, Sharia is the law of the land.” – Rasmus Paludan

On Thursday and Good Friday, Rasmus Paludan, the leader of the Danish Stram Kurs political party, scheduled protests in Sweden against Islamic Supremacy. Paludan organized demonstrations in some of the country’s most dangerous, immigrant-dense areas, widely considered no-go-zones. These protests, which coincide with the Muslim holiday Ramadan, were to show that Islamic values ​​are not compatible with liberal Swedish society and its freedom of expression and opinion.

Sweden’s exploding violent migrant crime rate poses a threat to his neighboring country Denmark, explains Paludan, because of the easy access between Scandinavian countries due to the Nordic Passport Union. The Nordic Passport Union allows illegal migrants in Sweden to easily travel and reside in Denmark without any travel documentation or even a residence permit.

Paludan intended to set fire to the Qur’an at the demonstrations to show the world once again how Islamic migrants would react to the provocation. Paludan’s mission is to educate the public on the damaging effects of Islam, fight against Sharia, and protect Swedes who are under attack by Islamic supremacists. Unfortunately, his mission to help others has landed him on the Muslim terrorist group al-Qaeda’s “Kill List.”

As Paludan has previously explained to RAIR Foundation USA, he believes that highlighting the inevitable violence from the slightest provocation will demonstrate the Swedish police’s loss of control over Islamic migrant areas. Mr. Paludan stated:

Sweden has been much more disturbed by Islam than Denmark. Our actions have shown that freedom of speech and freedom of peaceful assembly no longer exists in Sweden. Now, Sharia is the law of the land.

Shortly after 11 a.m. on Good Friday, Paludan began his public gathering in the immigrant-dense no-go-zone area of Rinkeby with both a speech and Qur’an burning. Paludan told the spectators that Islam is not compatible with Western society.

As predicted, violence ensued, and demonstrators threw objects at Paludan and the police. As a result, officers had to break up the public gathering despite another hour left of the planned demonstration.

A policeman was injured, and eight people were arrested on suspicion of, among other things, violent rioting. Police also arrested a man armed with a knife. According to authorities, he is suspected of violating the country’s knife laws.

The Stram Kurs live stream from Rinkeby is below:

Violence broke out in Örebro before Paludan’s scheduled demonstration at 5 pm; however, it was not possible due to the threats from the Islamic community. The protest could not occur even though police moved the event to the other side of the city to avoid confrontation with angry hordes of Muslim immigrants. Muslims chanted “Allahu akbar” at the scene. According to Gatestone,

The phrase “Allahu Akbar” actually means that “Allah is greater” than any other god. When recited, it empowers Muslims, making them feel superior to the rest of mankind. “Allahu Akbar” has, in fact, been a jihadist tool since the early years of Islam.

When it is shouted publicly as an expression of rage, however, particularly during an attack on others, it is intended to intimidate or threaten; its purpose is to emphasize that the assault is being committed on behalf of Allah — submitting to his command to kill enemies — and in the expectation of the reward of eternal paradise.

Police reported they were trying to calm the assembled crowds of Muslim migrants so that Paludan’s demonstration could begin. Police put up riot fences, among other things, to control the angry mobs. However, Muslim rioters attempted to force them down.

Below, Swedish news outlet, Samnytt captured a video from Örebro:

The riot in Örebro escalated, and several police cars were set on fire in Sveaparken. At least eight police officers are said to have been injured.

Despite the protest having to be canceled, Paludan went to another area and burned the Qur’an he had brought with him. He documented the burning of the Quran on film, which can be seen here:

As Paludan burned the books, he said, “the Qur’an is a dangerous book; you can get smoke in your eyes if you burn it. But it is even more dangerous to read.” Paludan further said that the Swedish police capitulated in the face of Muslim violence.

Muslim Riots In Several Other Places

On Thursday, in Linköping, instead of police maintaining order, they chose to flee and leave behind their cars, which the perpetrators looted and vandalized. Several of the officer’s cars were set on fire, and the rescue service was pelted with stones and other objects. In addition, several vehicles have been shelled with bottle rockets, and immigrant gangs have seized police uniforms.

Police commented on their choice to retreat from the riots saying that they did not want to have a violent altercation with the immigrant gangs.

Paludan’s demonstration there had to be canceled entirely despite receiving permission from the state. Three officers were beaten by angry Muslims and had to be taken to the hospital.

Below is a video of the thugs wearing the police officers’ clothing:

The violence then spread to Norrköping, where Paludan’s next demonstration was planned. However, the protest could not be carried out after the police gave in to the angry Islamic crowd and withdrew the demonstration permit.

Samnytt captured a video of some of the riots in Norrköping:

Politicians and left-wing media do not seem to understand that Paludan and his political party Stram Kurs are attempting to preserve the freedoms of citizens. Instead, they are fighting to ensure the safety of non-muslims who live under threat and regular attacks from migrant Islamic supremacists. With Left-wing politicians, Antifa, and Islamic supremacists aligning, these threats are only growing more dangerous by the day.

Every freedom-loving country must ask whether sovereignty and freedom should allow unpopular thoughts and expressions, including the burning of the Qur’an or the Bible or the Torah.

The Easter weekend’s Islamic riots continued on Saturday in Landskrona, where Paludan’s next state-authorized demonstration with a Qur’an burning was scheduled. Due to security concerns, however, authorities moved the protest to Malmö.

Despite the change of location, outraged Muslim perpetrators still rioted in Landskrona and set fire to cars, tires, and other objects. Furthermore, they coordinated stoning attacks on the riot police and their vehicles.

While Paludan set fire to a Qur’an with bacon, the outraged Muslim perpetrators rioted and set fire to cars, tires, and other objects. The Muslim protesters coordinated stoning attacks on the riot police and their vehicles.

At the newly designated demonstration site in Malmö, Paludan grilled a copy of the Quran, and a few slices of bacon before Islamic perpetrators reached the site. See the Qur’an burning here