END_OF_DOCUMENT_TOKEN_TO_BE_REPLACED

Muslims do not make their way to Australia to become Australians, but to make Australia Islamic. It is not, and we should not make it our business, to Â help settle Muslims behind what they perceive to be enemy lines…..

Thanks to Â BNI:

Already rejected by England and Ireland, Muslim ‘asylum’ seeker with fake passport is fighting deportation from Australia, saying he will be killed if sent back to Afghanistan.

Gee, maybe that’s the reason nobody else will give him asylum either? Muslim cleric warns Australian government they better not try to deport any more Muslims or it’s going to make them very angry. Human Rights activists and Left wing media nod heads in sympathy with the Muslim invader.

Media report from Australia showing the Sharia/Caliphate goals are world wide. The world is waking up slowly to save our freedom, but will it be in time to save us from the casualties of massive death tolls? Spread the word to those that still need to wake up.

END_OF_DOCUMENT_TOKEN_TO_BE_REPLACED

Â Lets tolerate barbarity so that the barbarians don’t have to become like us:

“Just a tiny little nick”- Â for the “tiny minority of excremists”, Â tinier than the 600-pound gorilla in the room:

These people are certifiably insane. First of all, Â its not circumcision, its genital mutilation. Second: who will decide how much will be cut off and how will those be punished who mutilate their daughters ‘properly?’

Wouter Limborgh, a criminal lawyer, proposes in his doctoral thesis to legalize a minor or symbolic female circumcision under medical supervision. The consequences for the girl in such a procedure are so minor, he says, that cultural freedom should take precedence. Limborgh writes that this will meet the wish of people to be who they are. Their quality of life will increase and it will prevent people from going ahead with procedures which aren’t visible.

Limborgh says this won’t be a slippery slope and that it could improve the position of women. If the procedure won’t lead to drastic and lasting harmful effects for the girl, there’s insufficient reason for punishment.

The idea was criticized by The Dutch Physicians Association and women’s organizations.

Other links from Islam in Europe:Â

END_OF_DOCUMENT_TOKEN_TO_BE_REPLACED

How much longer Â do we need Â to accept the fact that there are no “moderates?”

Not for the first time: 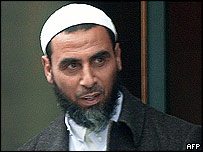 The expulsion comes in the wake of the expulsion Abdelkader Yahia Cherif (no relation), who had spent four years preaching at a mosque in Brest, in Brittany, and was expelled last Thursday.

France has deported to Egypt a radical imam who for months had been inciting followers in Paris area mosques to rise up against the West, the government said.

Described as dangerous, Ali Ibrahim Al-Sudani was detained and sent back to Egypt under an emergency deportation order, Interior Minister Brice Hortefeux said in a statement.

“The secret services had identified this dangerous individual who for the past months had been delivering sermons calling for a fight against the West in several mosques in the Seine-Saint-Denis area,” Mr Hortefeux said.

Mr Sudani, aged around 27, showed “contempt for our society’s values and incited violence,” he added.

The Egyptian national was the 29th imam or Islamic preacher to have been deported from France since 2001, according to the interior ministry.

In all, 129 Islamic radicals have been expelled from French territory, it added.

French security agencies had been tracking Sudani since 2008 and found his Jihadist teachings to be “quite hardline,” said an official close to the case.