Sen. Susan Collins on Wednesday blasted the Defense Department for classifying the Fort Hood massacre as workplace violence and suggested political correctness is being placed above the security of the nation’s Armed Forces at home.

Thanks to Vlad Tepes for making the vid available:

During a joint session of the Senate and House Homeland Security Committee on Wednesday, the Maine Republican referenced a letter from the Defense Department depicting the Fort Hood shootings as workplace violence. She criticized the Obama administration for failing to identify the threat as radical Islam.

Thirteen people were killed and dozens more wounded at Fort Hood in 2009, and the number of alleged plots targeting the military has grown significantly since then. Lawmakers said there have been 33 plots against the U.S. military since Sept. 11, 2001, and 70 percent of those threats have been since mid-2009.Â  Major Nidal Hasan, a former Army psychiatrist, who is being held for the attacks, allegedly was inspired by radical U.S.-born cleric Anwar al-Awlaki, who was killed in a U.S. drone strike in Yemen in late September. The two men exchanged as many as 20 emails, according to U.S. officials, and Awlaki declared Hasan a hero.

END_OF_DOCUMENT_TOKEN_TO_BE_REPLACED

Can’t have a video circulating of a Muslim shouting “Allahu akbar” and murdering people, now, can we? That would be “Islamophobic”!

FORT HOOD, Texas – A soldier who recorded the terror of last year’s deadly shooting rampage in Fort Hood using his cell phone was ordered by an officer to delete both videos, a military court heard Friday. Under cross examination, Pfc. Lance Aviles told an Article 32 hearing that his noncommissioned officer ordered him to destroy the two videos on Nov. 5, the same day a gunman unleashed a volley of bullets inside a processing center at the Texas Army post.

“Can’t have a video circulating of a Muslim shouting “Allahu akbar” and murdering people, now, can we? That would be “Islamophobic”!” Â Something tells me there’s a lot more to this story. Could it be that the noncommissioned officer was a fellow Mohammedan?

END_OF_DOCUMENT_TOKEN_TO_BE_REPLACED

The Age promotes the Snapper Myth

‘He must have snapped. They ignored him. Â According to the Associated Press, Hasan had come to the attention of the FBI at least six months ago because of internet postings that discussed suicide bombings and other threats.”

Hasan’s action was a planned execution. It was not the act of a man who suddenly “snapped.” More>>

Spencer: In Islamic law, jihad warfare may be defensive or offensive. Jihad is ordinarilyÂ fard kifaya â€“ an obligation on the Muslim community as a whole, from which some are freed if others take it up. Jihad becomesÂ fard ayn, or obligatory on every individual Muslim to aid in any way he can, if a Muslim land is attacked. That is what jihadists argue today â€“ that the American presence in Iraq and Afghanistan makes jihadÂ fard ayn, or obligatory on every individual Muslims.

But still, that is just jihad for the defense of Muslim lands. There is also offensive jihad, in line with Muhammad’s command that Muslims offer non-Muslims conversion to Islam, subjugation as inferiors under Islamic rule, or war. But in Islamic law, only the caliph is authorized to wage offensive jihad. (In the absence of a caliph every muslim is individually obliged to wage jihad and to strike terror in the hearts of the enemies, because the world belongs to Allah and the disbelievers have no say in it…/ed)

The Jihadist Is Always the Victim

Nidal Malik Hasan was born in Virginia but didn’t think of himself as an American: on a form he filled out at the Muslim Community Center in Silver Spring, Maryland, he gave his nationality not as “American” but as “Palestinian.” A mosque official found that curious, saying: “I don’t know why he listed Palestinian. He was not born in Palestine.” More>>

No. Hasan the killer shrink was not a snapper:

Major Nidal Malik Hasan worshipped at a mosque led by a radical imam said to be a “spiritual adviser” to three of the hijackers who attacked America on Sept 11, 2001.

Hasan, the sole suspect in the massacre of 13 fellow US soldiers in Texas, attended the controversial Dar al-Hijrah mosque in Great Falls, Virginia, in 2001 at the same time as two of the September 11 terrorists, The Sunday Telegraph has learnt. His mother’s funeral was held there in May that year.

The preacher at the time was Anwar al-Awlaki, an American-born Yemeni scholar who was banned from addressing a meeting in London by video link in August because he is accused of supporting attacks on British troops and backing terrorist organisations. More here>>

In Toronto this week, the brave ex-Muslim Nonie Darwish mentioned en passant that, on flying from the U.S. to Canada, she was questioned at length about the purpose of her visit by an apparently Muslim border official. When she revealed that she was giving a speech about Islamic law, he rebuked her: “We are not to question sharia.”

‘Praying for the Recovery of Dr. Nidal Malik Hasan’…

“What cowards we are. Political correctness killed these patriotic Americans at Fort Hood as surely as the Islamist gunman did. And the media treat it like a case of nondenominational shoplifting.”

(Video) Some people are celebrating the Fort Hood massacre. Can you guess their religion?

The authorities say they’re ‘searching for answers’ to the Fort Hood killings. The Qur’an might be a good place to start.

Michelle Malkin: I’ve said it many times over the years and it bears repeating again as cable TV talking heads ask in bewilderment how all the red flags Hasan raised could have been ignored: Political correctness is the handmaiden of terror.

TheÂ Guardian says that accused Fort Hood murderer Nidal Hassan was “the son of Palestinians from a village near Jerusalem.” Â In other words, he was a “Pay-Pal”, because we, the ‘International Community’ pay dearly for these fake refugees….More

Do a 3 minute google search, here:

Perhaps we should call this a politically correct massacre:

There is a sickness in American which needs to be cured. The body infected is Western Media across thepolitical spectrum, and the bug in this case is the idea of “Political Correctness”, picked up by theAmerican Left after being in bed withStalin withoutÂ protection. This contagious form of insanity requires a person to apply a layer of double-think to any event that even might have political ramifications and, since politics and morality are made one by the PC germ, that covers a lot of ground. More here>>

In the wake of Fort Hood jihad, Houston authorities try to assure non-Muslims that steps are being taken to keep them safe — no, wait…

Silly me. I thought that after an Islamic jihadist murdered twelve innocent non-Muslims, it would be the non-Muslims who would need reassuring and protecting. But of course that non-existent backlash takes priority over 12 dead unbelievers.

“Some Muslims fear backlash after rampage: In the wake of Fort Hood tragedy, Houston authorities try to assure the faithful steps are being taken to keep followers safe,” by Moises Mendoza and Lindsay Wise for theÂ Houston Chronicle, November 7: via Jihad Watch

Mehdi Hasan from the New Statesman knows who the enemy is:

“People like Robert Spencer are nasty, divisive and Islamophobic bigots who take whatever opportunity, whatever tragedy, they can to stir up hatred against Muslims and Islam in the west.”

Yep, that’s the spirit! Lets get rid of people like Robert Spencer and the jihad will go away, right?

KILLEEN — Almost exactly 24 hours after Thursday’s shootings at Fort Hood, Sgt. Fahad Kamal knelt in a small red-brick mosque near the base and prayed for strength.

“I just want to show myself in a positive way for the religion I represent,” he said. “I just hope people don’t stereo type.”

From Killeen to Houston, Thursday’s killings at Fort Hood left Texas’ tight-knit Muslim community reeling. Though the attack has been universally condemned by U.S. Muslim organizations, some worry that it could give the ignorant an excuse to stereotype and lash out at Muslims — or worse.

END_OF_DOCUMENT_TOKEN_TO_BE_REPLACED

Ft Hood mosque member defends shootings: “they were troops who were going to Afghanistan and Iraq to kill Muslims. I honestly have no pity for them.”

Thanks to DB in the comment section who directs us to thisÂ post, which features a BBC interview by Gavin Lee with a member of the Killeen, Texas mosque outside Ft Hood, the Islamic Community Center of Greater Killeen, where Malik Nidal Hasan was currently attending.

In the interview (the whole interview can be heardÂ here), mosque member “Duane” not only refuses to condemn Hasan, but justifies their murder because “they were troops who were going to Afghanistan and Iraq to kill Muslims”.

Here’s the relevant portion of the interview:

This Koranimal sounds exactly like Anjem Chaudary, who clearly stated that a Muslim cannot and never will condemn another Muslim and must stand for the cause, no matter what:

Choudary:“when we say ‘innocent people’ we mean Muslims … if you are a non-Muslim then you’re guilty of not believing in God”(3m 41s) In this video, Anjem Choudary talks about the Islamist terrorist attacks -Â  7/7 in London.

Duane: Well, that’s the way it is. I don’t speak for the community here but me personally I will not condemn him.

Gavin Lee : What are your thoughts towards those that were victims in this?

Duane :Â They were, in the end, they were troops who were going to Afghanistan and Iraq to kill Muslims. I honestly have no pity for them. It’s just like the majority of the people that will hear this, after five or six minutes they’ll be shocked, after that they’ll forget about them and go on their day.

Over atÂ Biased BBC they wonder whether this is the same Duane ReasonerÂ quoted today by the New York Times:

Duane Reasoner Jr., an 18-year-old substitute teacher whose parents worked at Fort Hood, said Major Hassan was told he would be sent to Afghanistan on Nov. 28, and he did not like it.“He said he should quit the Army,” Mr. Reasoner said.Â “In the Koran, you’re not supposed to have alliances with Jews or Christian or others, and if you are killed in the military fighting against Muslims, you will go to hell.”

Just last week, Hasan expressed views that Muslims shouldn’t serve in the military and fight other Muslims, according toÂ Duane Reasoner Jr., a recent Muslim convert who had been having dinner regularly with Hasan.Hasan had taken 18-year-old Reasoner under his wing, mentoring him in his new faith. After evening prayers he would often buy a fish dinner for Reasoner and sometimes the iman at the Golden Corral, a chain buffet restaurant. Besides mentioning that he prayed for a wife, the conversation almost never strayed from religion, Reasoner said, describing Hasan as warm and caring.

Looks like Hasan has left some disciples to continue his work at Ft Hood. 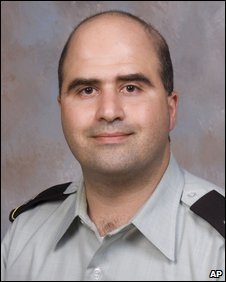 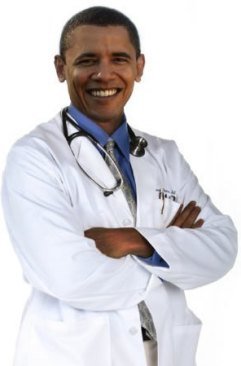