The uproar around Swedish cartoonist Lars Vilks continues to raise dust. The Swedish Intelligence Agency (SÃ„PO) now demands “protection money” if he still wants them around. 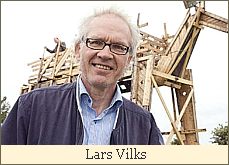 Today the Swedish Mohammed cartoonist Lars Vilks was scheduled to lecture on art in Gothenburg’s Eriksberg Hall. But the event was canceled by the organizers. For monetary reasons, or so they claim.

The Swedish Intelligence Agency SÃ„PO has started to collect money in order to protect Vilks. In connection with the lecture in Gothenburg, SÃ„PO demanded the organizers pay 25% of the costs associated with the event’s security, which made Vilks a very costly lecturer.

The renowned Coptic Christian priest Father Zakaria Botros wasÂ scheduled to speak in Vienna tonight, but the atmosphere created by Muslim threats was such the event had to be cancelled.

Below is the press release sent out by the Wiener Akademikerbund concerning this unfortunate turn of events. Many thanks to JLH for the translation:

Last week, with the greatest joy and in expectation of a courageous confrontation of the problems surrounding Islam, the promises of multiculturalism and diversity as well as the erosion of our value system, we invited you to a lecture/presentation with the Coptic scholar. Islam researcher and charismatic Christian missionary, Father Zakaria Botros.

After meticulous preparation and with Father Zakaria anticipating his first public appearance in Europe, it is with a heavy heart that we must cancel the event, which was scheduled for Thursday, May 6, 2010 at 7:00 PM.

For reasons of numerous Islamic threats of violence and intolerable pressure upon our oriental Christian friends, insistence upon holding the event would be not only risky, but absolutely irresponsible. More>>

Westergaard does it again:

Just in from Creeping Sharia

Take a moment and check out the image below carefully. There are a lot of nuances in this piece of art. via Islam in Europe: Denmark: New ‘Muhammad cartoon’.

The Grenaa City Hall decided to remove a painting down from their Easter exhibition after complaints from visitors.

The painting’s motif is a veiled woman and a pig looking at a picture of Kurt Westergaard with a bomb in his turban â€“ exactly like in his own controversial caricature of Muhammed.

Hans Christian SÃ¸rensen, a leisure artist, was very surprised by the city hall’s decision to take the picture down. He says it’s humorist and denies that the picture is a provocation.

“I think it’s OK that Kurt Westergaard drew Mohammed, but it doesn’t matter for my painting and if anybody should take offense by the subject matter, it should be Kurt Westergaard or the pig,” he says.

Hans Christian SÃ¸rensen doesn’t understand that City Hall say they’ve received complaints from visitors. He was at the exhibition for several days and he only got positive comments from the public. He says the picture is surreal and funny.
“Art should be original and not copy anything. We can all paint flowers, but people see so much of it. Art should be debated, that the point of it. That’s the difference between art and decoration,” he says.
It is pretty funny actually.

Kurt Westergaard, the man behind the most famous Mohammed cartoon, offered a piece of his artwork to a charity auction for victims of the Haitian earthquake. The charity rebuffed his offer due to fears of violence.

“We value the safety of our employees quite highly”-

read it and weep!

Our Danish correspondent TB has collected and translated the material for this post, but I’ll post his appeal for the charity first, since the auction is on Saturday, and this is therefore time-sensitive:

I urge everyone to spread thisÂ web address. This is where you can bid on Kurt Westergaard’s painting or just leave money for the kids of Haiti.

UseÂ this form to place a bid.

Here are theÂ two men behind it. The headline above the picture reads: “Everybody loves Kurt, exceptÂ Lauritz!”

Next is a brief news story about what happened, and below that is a press release from Galleri Draupner.

What is notable about the news story below is Lauritz’ explanation that “[w]e value the safety of our employees”. This is the customary reason given for self-censorship under the dhimmi regimes of the Islamized West. Yale University Press, Borders bookstores, various newspapers and television stations, the publishers who refused the novel about Aisha â€” all of them moderated their actions based on a perceived need to keep their employees safe.

Their rationale may be restated thus: “We fear that violent religious thugs will injure or kill us. Therefore we will accede to their demands in advance, in order to make sure that no one gets hurt.”

Jihad is not even necessary. The lickspittle craven cringing cowards of our cultural elite are ready to cry uncle before the first sword leaves its scabbard.

TV2’s morning lifestyle programme Go’morgen Danmark was the latest in a long line of those trying to help the victims of the Haitian earthquake. The show organised an auction through auctioneers, Lauritz.com, and asked well known politicians and personalities to donate personal items for the charity fundraiser.

A signed copy of Bill Clinton’s book dedicated to the head of the Social Democrats, concert and sports events tickets and a porcelain doll owned by Pia KjÃ¦rsgaard, head of the Danish People’s Party, are already listed in the auction.

END_OF_DOCUMENT_TOKEN_TO_BE_REPLACED

Zappa Quote of the Day:

Obama may not get it, but the American people sure do

President Obama may not understand what a nuclear Iran would mean to the American way of life, but the American people sure do. Bloomberg reports that an overwhelming majority of the American peopleÂ favor military action against Iran to prevent the Islamist Caliphate from going nuclear. Carl in J’lem has more…