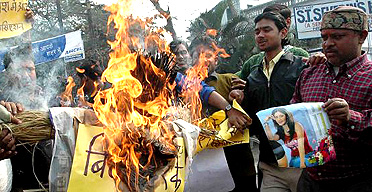 Curiously, the expose’ on the hate preachers and the undercover work on the mosques hardly got any reaction at all so far. Instead, the crappiest of all shows, ‘Big Brother’- is now making waves internationally. An Indian actress is said to have been ‘bullied’ amidst claims of ‘racism’…

Trivia, nothing but trivia and utter nonsense rules supreme, if you can bear it:

The row over the alleged racist bullying of Celebrity Big Brother star Shilpa Shetty reached the world of international diplomatic relations today.
Both the prime minister, Tony Blair, and the chancellor, Gordon Brown – who is visiting Shetty’s home country of India – made public comments about the show, while the Indian government promised to “take appropriate measures”.

Well, there is always Germaine Greer to comment. But it still doesn’t make any sense:

Every time someone sends in a complaint to Ofcom about racism in the Big Brother house, the profile of the show is raised and Shilpa earns a bit more of her huge fee. But it’s a funny old world, to be sure. You can call her a “dog”. Sexism is fine. What you mustn’t do is call her a “Paki”. As if to be Pakistani was to be worse than being a dog. Our very tenderness on this issue is the flip side of racism, and still part of the same coin. If you call me an Aussie you don’t insult me because Aussieness is OK. Pakiness is evidently not OK.

3 thoughts on “England: Obsessed with BS?”