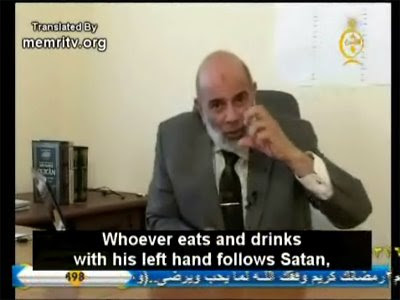 In May 2004, international Muslim Brotherhood figure Wagdi Ghoneim came to Central Ohio to speak at a fundraiser for theÂ Noor Islamic Cultural Center, now in Hilliard. That, of course, was before he was arrested, deported, and banned from the US later that year for his advocacy of terrorism and religious extremism. He was serving as the imam for the Islamic Institute of Orange County (CA) at the time. A few months ago IÂ reportedÂ on Ghoneim’s Central Ohio connections after Ghoneim was arrested and deported from South Africa for the same reasons.

Apparently, in his view, to make the world safe for white underwear.

Following are excerpts from an interview with Saudi cleric Muhammad Al-Munajid, which aired on Iqra TV on July 26, 2007:Sheik Muhammad Al-Munajid:Â This is a nation of monotheism, and this is the Islam that Allah wants to spread throughout the world, and to rule the land it its entirety.Â Allah wants this. He sent down the Koran and the hadith for that purpose.

Humanity can have no happiness without Islam. Humanity can enjoy no goodness, unless the sun of monotheism, the Koran, and the Sunna shines upon it. The world without the sun of the divine revelation is a place of eternal darkness, as we can see today â€“ a world of frustration, collapse, injustice, arbitrariness, and wrongdoing. The world today is a jungle â€“ a world of barbarism of all kinds. People in many parts of the world are not happy, because they do not walk in the path of Allah.

There are rules of shari’a in everything. We have counted almost 70 rules about how to urinate and defecate. In contrast, how do those beasts in the West answer the call of nature? They stand in front of other people, in toilets at airports and other public places. They do not care about covering their private parts. Even their underwear is colored and not white, so it can conceal all that filth. We are a nation that has long known the meaning of cleanliness, what to do when nature calls, and what the rules of hygiene are. The others, to this day, live like beasts. To this day, many of them are not circumcised, even though the World Health Organization has advised to circumcise people as a treatment for AIDS, because it has been scientifically proven that circumcised people are less susceptible to AIDS, and are less likely to spread it than uncircumcised people.

Eating with the left hand:

Well, the former Noor Center speaker appeared earlier this month on Al-Nas TV, addressing the age-old issue of how eating and drinking with your left hand follows Satan and his success at beating back the demonic temptations to use his left hand. MEMRI has theÂ video, and also theÂ transcriptÂ of Ghoneim’s remarks:

Wagdi Ghoneim:Â Some people eat with their left hand. What’s this supposed to be? They say: When you eat, the fork goes in the left hand. Do you eat with your left hand? You do, and then you take a drink. What’s this supposed to be? You use your left hand, and yet you claim to hate Satan?! You dare to tell me that you sense the enmity of Satan?! Allah give me the strength to resist Satan. . . Hold on a sec. The Prophet Muhammad said: “When you eat or drink, do not use your left hand, because Satan eats and drinks with his left hand.”Â Whoever eats and drinks with his left hand follows Satan, and whoever loves the Prophet Muhammad must eat with his right hand.

But when you tell people this, they say: But Sheik Wagdi, the rules of dÃ©licat and Ã©tiquette require the knife to be in the right hand, and the fork in the left. You should cut the food with your right hand, and eat with your left. If you dare to switch â€” the fork in your right hand and the knife in your left â€” they say: “Oh, how sauvage! This is unheard of.” Brother, what dÃ©licat? You are a Muslim.

When I was secretary-general of the commerce trade union, a large Iraqi delegation came, and we took them to a very big, five-star hotel in Cairo. We sat down to eat, and as I always do, I took the knife in my left hand and the fork in my right. Along comes the chef in his hat, taps me on the shoulder, and whispers: “Pardon me. . .” I said to him: “I am a Muslim!” So he said: “I’m sorry, I apologize.” I take pride in my Islam â€” or is Islam something disgusting, which I should be ashamed of? No.

Ghoneim:Â Some people say: “I am left-handed. I use my left hand for everything.” I was like you. I used to eat, drink, dress, and write with my left hand. That’s how Allah created me. The moment I became religious in 1969, Allah be praised, this came to an end. There were times when Satan tempted me to use my left hand, so in order to put an end to this altogether. . . What do I eat? Rice? I eat rice with a spoon. Bread? I need to cut it first. Fine, I’ll cut the bread in advance. I prepare the water and everything. That’s it. I’ve already cut the bread. . . Then I take my left hand and place it under my left leg. That’s it, it’s stuck. It won’t come out. I take the spoon in my right hand, and the same goes for the fork. . . The hadith says that when you are done eating, you should lick your fingers clean, because you don’t know where exactly the blessing lies. You say this is disgusting because it was the Prophet Muhammad who said it, but if Michael Jackson or some nobody told you to lick your feet, you would. We are Muslims, and we follow the path of the Prophet.

Oh, and don’t forget to lick your fingers after eating in the proper Quranic manner! We wouldn’t want to give in to Satan’s temptations!

The audio of Ghoneim leading a song depicting Jews as monkeys and apes can be found at theÂ Investigative Project.

All of these incidents occurred and made public well before Ghoneim’s May 2004 appearance on behalf of the Noor Center.

How The Ayatollah Says To Poop

Posted 01.27.2004 byÂ Dave ShamelessÂ (13)
I was recently re-visiting one of my favorite sources of “wisdom,” a collection of Ruhollah Khomeini’sÂ political, philosophical, social, and religious sayings. During the Islamic fanaticism that erupted in Iran during the late ’70s, it was known as “The Little Green Book.” It is filled with amazing quotes (reading it aloud at parties is great fun) on a wide range of topics and fascinating interpretations of Islamic law — e.g., how many goats you have to give your neighbor if you accidentally sodomize one of his children, etc.

The Ayatollah had many fixations, basic bodily functions being among them. I’ve decided to compile the poop-related quotes for you below. Should you ever stumble across a copy of the book, it’s also well worth the read for what he has to say about sex, menstruation, marriage, Islamic justice, etc.
[from Chapter 9, On The Manner Of Urinating And Defecating]

It is required that everyone, when urinating or defecating, hide his sexual parts from all pubescent persons, even his sister or his mother, as well as from any feebleminded person or children too young to understand. But husband and wife are not required to hide them from each other.

It is not indispensable to hide one’s genitals with anything in particular; one’s hand is enough.

When defecating or urinating, one must squat in such a way as neither to face Mecca nor to turn one’s back upon it.

It is not sufficient to turn one’s sex organ away, while oneself facing or turning one’s back on Mecca; one’s privates must never be exposed either facing Mecca or facing directly away from Mecca.

Urinating and defecating are forbidden in four places: blind alleys, except with the permission of those living along them; the property of a person who has not given permission to do so; places of worship, such as medersas; graves of believers, unless one does so as an insult to them.

The urinary orifice can be cleaned off with water, and it is enough to wash it just one time after urinating. But those in whom the urine comes out through some other orifice would do better to wash that orifice at least twice. This must be observed by women as well.

It is not necessary to wipe one’s anus with three stones or three pieces of fabric: a single stone or single piece of fabric is enough. But if one wipes it with a bone, or any sacred object, such as, for example, a paper having the name of God on it, one may not say his prayers while in this state.

It is preferable, for urinating or defecating, to squat down in an isolated place; it is also preferable to go into this place with the left foot first; it is recommended that one keep his head covered wile evacuating, and have the weight of his body carried by the left foot.

It is better to avoid urinating standing up, or urinating onto hard ground, or into an animal hole, or into water, especially stagnant water.

It is recommended not to hold back the need to urinate or defecate, especially if it hurts.

It is recommended to urinate before going to bed, before having sexual intercourse, and after ejaculating.

A woman has no special instructions to follow after urinating; if she afterward notes some moisture at the vaginal orifice which she cannot judge as pure or impute, the said moisture remains pure and in no wise stands in the way of her performing ablutions or praying.
[from Chapter 10, On the Manner of Eating and Drinking]

It is forbidden to consume the excrement of animals or their nasal secretions. But if such are mixed in minute proportions into other foods, their consumption is not forbidden.
[from Chapter 11, On Purity and Impurity]

There are eleven things which are impure: urine, excrement, sperm, bones, blood, dogs, pigs, non-Moslem men and women, wine, beer, and the sweat of the excrement-eating camel.

If excrement, urine, or other impurities have polluted running water, only that part of it which has been changed in odor, color, or taste becomes impure; the rest remains pure.
[from Chapter 17, On Fasting]

Taking an enema, even for medically therapeutic reasons, breaks the fast; but the use of suppositories is not forbidden; however, it is preferable to abstain from using opium suppositories.

One thought on “Headbangers”