*Â Update thanks to ZIP: Â Al Qaeda is deeply unhappy with the Syrians crackdown on jihadists: “Â increased Syrian pressure would lead to confrontation”. Sources added that this suicide bombing was a warning that al- Qaeda would turn Syria into a “jihad land.”

A car bomb killed 17 people and injured 14 others on a crowded residential street in Damascus today, according to Syrian television. 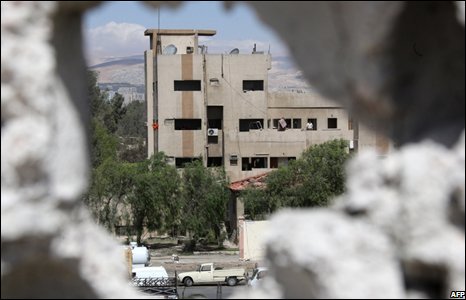 It said a car packed with 440 pounds (200 kilograms) of explosives blew up on Mahlak Street, in a southern district of the Syrian capital close to the city’s international airport. . The charred remains of the car was shown by television in the street near a primary school as firefighters stood near a wide crater believed be caused by the blast.

One witness said on television the explosion sounded like an earthquake. “My apartment collapsed, and five of my family members are injured and in hospital,” he said.

Another witnesses who was sleeping in his truck at the time of the blast said it appeared as if the bomb vehicle was a taxi. “I saw lots of smoke and the glass windows of my truck shattered.”

Bassam Abdul-Majid, the Syrian Interior Minister, called the bombing a terrorist act and said all the victims were civilians. But he would not say who might have been responsible. “We cannot accuse any party. There are ongoing investigations that will lead us to those who carried it out.”

Such bombings are rare in Syria, a tightly controlled country where President Bashar Assad’s regime has used heavy-handed tactics to crack down on dissent.

But over the last year, the country has witnessed two high-profile assassinations. Several explosions have also been blamed on Sunni Muslim militants opposed to Syria’s secular government.

Today’s bombing was by far the largest to hit the capital in recent times. It shattered building and car windows and twisted the roof off one car, according to footage aired on Syrian television.

The explosion occurred at the intersection that leads to Saydah Zeinab, a holy shrine for Shia Muslims frequently visited by Iranian and Iraqi pilgrims about five miles (8km) away. A building used by the intelligence services is also located in the area, but cars are not normally allowed to park nearby.

The last big explosion in Damascus was in February when a car bomb killed Imad ughniyeh, one of the world’s most wanted and elusive terrorists. The former security chief for the Shia militant group Hezbollah was suspected of masterminding attacks that killed hundreds of Americans in Lebanon and brutal kidnappings of Westerners.

Hezbollah and its top ally, Iran, blamed Israel for the assassination, but Israel denied any involvement.

Syria has long been on Washington’s list of states supporting terrorism, and the Bush administration has sought to isolate the Assad regime for its support of Hezbollah and radical Palestinian groups. Its attempts intensified after the 2005 assassination of former Lebanese prime minister, Rafik Hariri, which many in Lebanon blame on Syria.

But in recent months, Syria has been trying to change its image and emerge from international isolation. President Assad has agreed to establish diplomatic ties with Lebanon and has pursued indirect peace talks with Israel, mediated by Turkey. He says he wants direct talks next year.

European, American and Arab officials also have increased their visits to the country after years of avoiding it.