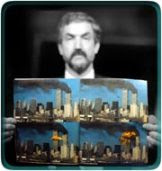 * Yusuf, no amount of smoke turns garbage into gold: Â Obama was born a Muslim to a Kenyan Arab Muslim father. That’s a fact. Its also a fact that your ass is always on your backside and no amount of twisting and turning will change that. Barrack Hussein’s white American mother, a ‘revert’ to Islam, later remarried another Muslim from Indonesia, where Mr B.O. Â spent his formative years in a Muslim school. Nothing, absolutely nothing makes Â B.O. a Christian, not even his 20 years in a black racist ‘Liberation Church’. The wearing of Muslim garb in Kenya is not a case of simply wearing a sarong, it shows that Barrack Hussain clearly Â sees himself as a Muslim and identifies with Islamic causes.

Yusuf, Â I Â would be the happiest guy in the world ifÂ extremists made up only 10-15% of the Muslim world population. But knowing that in Islam every man, woman and child is religiously obliged to wage jihad against unbelievers and Jooozzz it might be better to convince Dr Pipes that in fact the opposite Â is true and only 15 % might have what it takes to be apostates. Because a believing Muslim like yourself Â is and always will be a danger to himself and to every infidel around him.
*
And about your reputation, Yusuf, don’t worry about it: you ain’t got one. Â Lipstick on a pig is your game, we all know that. It is you who’s a sucker for a tiny fringe of Newspapers, every shiite of them.
*
Just remember Yusuf, Wherever you go,Â whatever you do: don’t forget to flush!

* Update: kind of funny to read some of the (undeleted) comments on Yusuf’s blog. If Irfan wasn’t such a pathological liar you could almost feel sorry for the guy:

Â aisha’s hymenÂ said…
“The lesson I have learned from this incident is that the best way to expose Mr Pipes is to quote exactly what he says.”Â Â Â Â

Rather than simply making shit up?

I’m glad you learned from this, Irfan, although most people learned not to lie when they were about three years old.

Â dan’s pricklessÂ said…
This is a message for Dan Lewis a.k.a. A’s H. Could you please contact your psychiatrist urgently for an appointment. Your medication clearly isn’t working, and you need to be re-assessed.Â Â Â Â

Â anonymousÂ said…
Daniel Pipes taking you to the cleaners is good news. You are unrepentant. All your money has been stolen from the taxpayers because you are unemployable except as a public servant bludger. Some bright jewish lawyers are going to do the right thing for justice by sueing you until you are just nothing. Cop some Western justiceÂ Â Â Â

Â anonymousÂ said…
anon @ 956, are the voices also telling you that the “bright jewish lawyers” are backed up by nasty “jewish bankers”?Â Â Â Â

Â anonymousÂ said…
I am jewish. You are a fat black paki turd. Which race has the higher average IQ?. The first step to solve the terrorist problem is to strap your smelly bum to a satellite guided bomb and drop you on Pakistan. Removing all muslims from Western countries is the next step. Removing all muslims to the arctic is the third. When the muslims are chewing on each others testicles trying to eat and stay warm is the time to cover them with napalm. In the North Pole they can become close to Satan or to Santa. Either way humanity will grateful. The only place to find muslims will be the “is lamb” in butchers shops.Â Â Â Â

Â jackÂ said…
A real Jew wouldn’t use such filthy language. Real Jews have respect for other religions.

Â anonymousÂ said…
An opinion article published in The Canberra Times by Irfan Yusuf on August 18, ‘’Justice the remedy required to help Bosnia heal’’, cited the US analyst Daniel Pipes as predicting that Europe’s next Holocaust victims would be Muslim migrants and it alleged that Mr Pipes suggested Muslims thoroughly deserved such slaughter. The Canberra Times and Irfan Yusuf accept that Mr Pipes never predicted nor has he ever endorsed a Holocaust of European Muslims, and they unreservedly apologise to him for the errors.Â Â Â

Hahahah Daniel Pipes will be getting the fire brigade to pull your turd coloured carcass out of his new home. When you lose your property to all the people you defame it will be a good day for Australian justice. It’s been interesting watching your pathetic life. Just kill yourself you smelly fat black bitch.

One thought on “Yusuf rubs it…”