Muslims give Obama a “pass” on religion

More on Obama’sÂ win-win situationÂ with Muslim voters. “Why Muslims give Obama a pass on religion,” by Sherri Day for theÂ Tampa Bay,Â from DW

Barack Hussein Obama, a devout Christian politician running for president, is not and never has been a Muslim.

* Sure thing, Sherry. How would you know? Â Sure you did your research or do you still believe in the tooth-fairy?

But even Muslim voters seem to understand reasons for the clear distance he’s trying to put between himself and them.

“The Muslim community is sophisticated enough to know how politics work in this country, the nuances of politics and what people have to know to get elected,” said Ali Khan, the executive director for the American Muslim Council, a Muslim advocacy organization based in Chicago. “I think Barack Obama is getting a pass.”
[…]

Ben Jaoudi, an Army veteran from Brooksville, said Obama’s campaign strategies [distancing himself from Islam] don’t offend him. A Democrat, he plans to vote for the Illinois senator next month. But he thinks Obama has bigger problems than falsely being thought a Muslim.

“Prejudice still exists here,” Jaoudi said. Obama “is educated, and he’s smart. They don’t care because he’s black. They’re going to pick McCain. You know it, and I know it. If he (were) Muslim, he’d be wiped off the map completely.”…

Mackerras: no white wives in the White House

The main thing I like about Obama is the fact thatÂ he married a traditional American black woman. It would have been so typical of the Obama style of man to marry a white woman. Had he done so I would have seen very little to admire in him.

IN 2006, BARACK HUSSEIN OBAMA 1ST VISITED ISRAEL AND HE PRAISED ONLY ONE HOLY SHRINE. GUESS WHICH ONE?

From Reliapundit at the Astute Bloggers:Â Â
In 2006, Obama first visited the Holy Land.
OBAMA did a PODCAST on his trip – ( CLICK HERE FOR AUDIO).Â Â

The next day, and the final full day in Israel, we spent finally doing a little bit of sight-seeing and traveling through the old city of Jerusalem. Those of you who have been here know the incredible magic of the city.

As the sun rises over 2,000-year old walls – walls built by David, Soloman, the Turkish Empire, we visited the Church of the Holy Sepulcher, where the site of Calvary and Jesus’ tomb is located. Just a stone’s throw away, the Western Wall; across from there you have the magnificent Dome of the Rock, gilded in gold.

OBAMA SAYS:Â “the magnificent Dome of the Rock, gilded in gold”.

Like his slip during the Stephanopoulas interview, IT’S A REVEALING FREUDIAN SLIP – (AND ONE WITH A STUPID REDUNDANCY, AND A MISTAKE: THE WALLS ARE 3000 YEARS OLD.)

THIS IS A VERY REVEALING SLIP. (MORE HERE, BELOW.)

ASIDE:Â WITHOUT ONE OF THE ABOVE, THE OTHERS WOULD HAVE NEVER EXISTED. 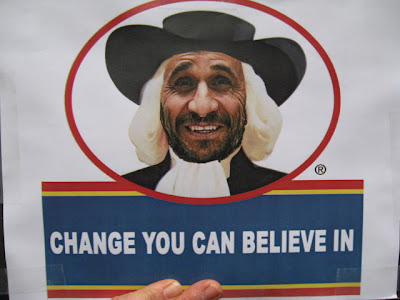