From our “Islam explained” department: UNITED NATIONS, Oct 10 (KUNA) – Kuwait late Thursday rejected Terrorism and criminal acts in all their forms and manifestations and urged the international community not to link them to any particular religion, civilization or ethnic group.

* The good Muslims in this picture blame infidels for terrorism in the form of cartoons. Terrorism for them also means the efforts of infidel nation states to protect themselves against Islam terror, Â or resisting the spread of Islam. Killing infidels is not considered terrorism, in fact “Tabari IX:69 – “Killing disbelievers is a small matter to us (Muslims).”Â

* Here we go: whatever you do, don’t connect the dots! Just don’t look at Islam!

Addressing the General Assembly’s legal committee, Kuwaiti diplomat Mohammad Abdullah Al-Ateeqi said that at the national level, Kuwait established a specialized unit for financial oversight and for the investigation of money-laundering and Terrorism financing.

He called on States to adhere to the relevant international resolutions to combat Terrorism, to avoid double standards in the application of international legitimacy, and to put an end to foreign occupation, injustice and violation of human rights.

* Translated: “to put an end to foreign occupation” means the destruction of Israel, “injustice” means to replace the constitution with the sharia, and “violation of human rights” means stop arresting Koranimals who follow their religion by engaging in terrorism./ed

He said Kuwait looked forward to the formulation of a comprehensive Treaty against international Terrorism, in which a clear legal definition of Terrorism would be included, so as to distinguish between the scourge and the legitimate right of peoples to resist occupation.

* Of course that would not include lands occupied by the Islamic scourge. Only infidels and Jews occupy Muslim lands. And any resistance to jihad is illegitimate and terror, because it the whole ummah Islamiyah gets sleepless nights when they think about how hard it is to fight and kill unbelievers who might fight back/ed

He urged the United Nations to develop systematic standards for relief and assistance to distinguish between charitable non-profit foundations and associations, and illegal activities carried out by terrorist organizations.

There should also be clear and firm regulations against those who defame religions, or incite ethnic or sectarian strife, he urged.

* Sure. The most important thing. Nothing worries the ummah more, right Yusuf? 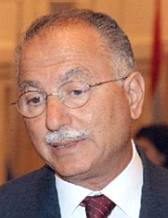 We’ve written numerous times in this space about Ekmeleddin Ihsanoglu, the Secretary General of the Organization of the Islamic Conference (OIC) â€” see the bottom of this post for a full list of previous articles on the topic.

The OIC functions as a sort of Islamic United Nations, and in the last ten years or so has become the tail that wags the UN dog. Since the OIC almost always votes as a block in the General Assembly, it can force through resolution after resolution condemning Israel, Zionism, Islamophobia, the “defamation of religion”, etc., etc.

The OIC has implemented a ten-year plan to eradicate Islamophobia, and has set up an “Islamophobia Observatory” to keep an eye on Islam-unfriendly activities among the infidels. Prof. Ihsanoglu is the point man for this operation, traveling the world to confer with leaders and speak to both Muslims and kuffar about the dangers of Islamophobia.

When you read Prof. Ihsanoglu’s speeches, you’ll notice a certain disconnect between the Islam he describes â€” peaceful, tolerant, modern, benign, and ecumenical â€” and the one that is seen nightly on the TV news, even when laundered through the PC washing machine that is the MSM.

Ekmeleddin Ihsanoglu offers bromides, clichÃ©s, and banalities when describing Islam to Westerners, and he is not generally challenged when he does. This past week offered a rare exception, however, when the Secretary General came to Helsinki to give his stump speech to a Finnish audience.Â Tundra TabloidsÂ was there, and was able to confront Prof. Ihsanoglu face to face.

Below are some excerpts fromÂ a report by KGS. Visit the original post for more details, plus photos and video:

[KGS said during question time] “I must take exception to the remarks by OIC Sec-Gen Ihsanoglu, that “there is no such thing as the right to insult.” Contrary to what the Secretary-General says, Freedom of speech does in fact mean the right to insult. Regardless of how tasteless it may be, it is a crucial, integral part of freedom of speech, one simply can’t survive without the other.

Also, while it’s understandable that professor Ihsanoglu presents the Organization of the Islamic Conference in the best light possible, I find it necessary however, to bring to light some of the troublesome aspects of the OIC itself and its agenda, that Sec-Gen Ihsanoglu is unwilling to touch.

While the OIC presents itself as being concerned with human rights as well as being a bridge for peace and understanding to the non-Muslim world, many of its own member states are the chief violators of human rights and promoters of the vilest forms of anti-Semitism seen since the rise and fall of National Socialism in Germany, during the 30’s and the 40’s. The evidence is undeniable, it’s a fact which has led the US House of Representatives to approve Resolution 1361 adopted on Sept. 23 of this year, with the expressed aim, and I quote:

“defeating the campaign by some members of the Organization of the Islamic Conference to divert the United Nation’s Durban Review Conference from a review of problems in their own and other countries, by attacking Israel, promoting anti-Semitism, and undermining the Universal Declaration of Human Rights.”

So my question to professor Ihsanoglu is:Â In light of the US Congress resolution, Can OIC sec-Gen offer his own personal assurances that the O I C is not going to use the conference, to attack Israel, as well as focusing on global blasphemy, which “would legitimize arbitrary restrictions of freedom of thought, conscience and religion, and the freedoms of expression and opinion, all in the name of protecting religions from ‘defamation’ and ‘blasphemy.?

OIC Sec-Gen Professor Ekmeleddin Ihsanoglu:Â “Well there are many other things to speak of… I don’t know what you mean by eh… this person asked me, “What is the alternative to Islamism?” I don’t know anything called Islamism, I know Islam, in fact I don’t know what Islamism is. Now, coming to the very important question, addressed by the last person, sir you are under the wrong impression.

Ekmeleddin Ihsanoglu:Â We are not anti-Semitic, (unclear) believing in moderacy and decency as part of my belief, my doctrine, I am a Muslim, and when I pray, I pray for all prophets including Moses, Jesus and Mohamed. So you cannot speak about any Muslim, good or bad, as anti-Semitic, this is a theory, this is not the case.

When it comes to OIC’s position, I have to tell you our group there is very active, and we’re proud of it. But we being active there, we say, to European countries who are members of this, eh, and other Western countries of this commission, the Council, the Human Rights Council, “Please, lets work together… please lets work together”.

Tundra Tabloids:Â Yes it is.

Ekmeleddin Ihsanoglu:Â I must then as you one question, why did the same newspaper refuse, the same editor who allowed these uncivilized cartoons, “on my prophet”, why he did not allow publishing a similar cartoon on Jesus Christ? The same newspaper?

It’s hard for me to believe thatÂ Jyllands-PostenÂ â€” or virtually any other European newspaper â€” has never published a single cartoon that depicts Christ in an insulting fashion. During my time in England, I remember seeing several such cartoons â€” one of them depicting Jesus in drag.

So this is disingenuous, to say the least, as is most of what Prof. Ihsanoglu says. As usual, he is long on platitudes, but short on specifics.

We should all “work together” â€” OK, a nice sentiment, and it makes for a good sound bite.

But what specific form should our “working together” take? Would it perhaps involve the building of Orthodox and Catholic cathedrals in Saudi Arabia and Iran, even as mega-mosques rise to dominate the skylines of European cities?

Should we expect that something resembling English Common Law will take root in Pakistan, even as Sharia Courts are officially implemented in the UK?

C’mon, man, tell us what you propose!

Unfortunately, Ekmeleddin Ihsanoglu is not going to give more detailed explanation of what “working together” means, because the nasty little truth is that Islam isÂ neverÂ going to work together with the infidel West, except on Islam’s terms. Those terms are as follows:

This is working together, Islam-style. We’d best get used to it, because it represents our future.

Previous posts about Ekmeleddin Ihsanoglu and the OIC:

One thought on “Kuwait "rejects Terrorism in all its forms", calls for its definition”