* Because the burqa is a symbol of “female submission that goes beyond its religious meaning” Â it is “not unreasonable, for public security requirements … or the protection of civil liberties” to bar it from the publicly funded language classrooms.

PARIS â€” In secular France, it is illegal for hotel owners to turn away women wearing Muslim headscarves but OK to ban those wearing head-to-toe burqas from state-sponsored French language classes.

Two recent decisions have demonstrated how tough and touchy it is to legislate religious expression in a country that has a long-standing separation between church and state â€” and an increasingly multicultural society with a growing Muslim population. 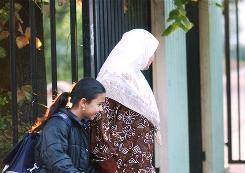 A French schoolgirl is accompanied by her veiled mother at the gate of a school in the Paris suburb Aubervillers in September 2004. Such a headscarf would be acceptable under a new French rule because it is not a burqa covering the body and face.

“Religious freedom is not absolute,” the head of France’s government anti-discrimination agency, Louis Schweitzer, said in an interview with the Catholic dailyÂ La Croix, published Thursday. He said authorities are trying to find “the most reasonable compromise.”

His agency ruled last month that it was acceptable to ban women wearing the burqa and niqab â€” billowing clothes that cover the body and face worn by pious Muslim women â€” from state-sponsored French language classes for immigrants.

Under French law, such classes are sometimes required in order to apply for French residency or citizenship.

Earlier this year, a national agency responsible for dealing with new immigrants complained that the presence of the veiled women “hinders the proper functioning” of the language classes and asked the anti-discimination agency, known as Halde, to examine the matter.

In its Sept. 15 decision, Halde called the burqa a symbol of “female submission that goes beyond its religious meaning” and said it is “not unreasonable, for public security requirements … or the protection of civil liberties” to bar it from the publicly funded language classrooms.

The National Federation of French Muslims condemned the decision.

“I’m against bundling women up but I am also against those who prevent other people for learning,” spokesman Elbekkay Merzak said in a telephone interview. “How can you bar someone from getting something so fundamental as language instruction?”

A French appeals court ruling this week showed that limits on the veil can only go so far.

On Wednesday, the appeals court in the northeastern city of Nancy confirmed a decision against the owner of a bed and breakfast inn who refused to board two veiled women. The court fined inn-owner Yvette Truchelut $6,000 over the 2007 incident.

Several decisions in recent years have sought to define how much religious expression is acceptable in France’s public realm.

Some critics complained that the law â€” which allows for discreet religious signs, like small crosses â€” specifically targeted Muslims. France has an estimated 5 million Muslims â€” the largest such population in Western Europe.

Many of those are immigrants from former colonies in North Africa. The state-sponsored language classes are part of revamped immigration procedures aimed at attracting better-skilled workers and better integrating newcomers. Conservative President Nicolas Sarkozy was elected last year in part on pledges to tackle illegal immigration.

One thought on “France bans burqas in state language classes”