with thanks to Yid with Lid 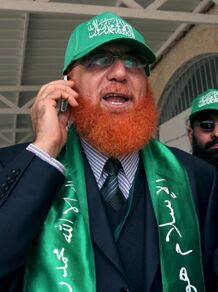 Ziad Abu Tir senior Hamas Terrorist, and most likely the Brother of Mahmoud Abu Tir Hamas’ Minister for Jerusalem (and sometimes Bozo impersonator-pictured left) affairs was killed in an Israeli Air strike.
The air strike took place Monday morningÂ asÂ an Israeli air-to-ground rocket struck a car in the village of Abbasan, east of the southern Gaza town of Khan Younis, killing at least five people, two of them terrorists.

The Air Strike “killed two birds with one stone” not only did it get a terrorist murderer off the street, but the car was completely destroyed. One less pollutant in the world, It has to make the global warming people happy.

There is no word on how long before Ziad’s brother will resume his Bozo duty’s.

Beyond Brother Mahoud, there must be other mourners of this killer. Like the liberal professors that continually honor Hamas Terror. Take Neve Gordon of Ben Gurion University, a few years back for example, when Israel was surrounding Arafat’s compound in Ramallah because he was harboring other terrorists, Neve ran to Ramallah

to act as a human shield to block Israel from arresting the terrorists. His love of Islamic murderers was further shown the next day with pictures on the front pages of two Israeli newspapers as Gordon embracing Arafat in solidarity. Neveregularly denounces Israel as a fascist,Â racist, terrorist entity, as an apartheid state, and he openly calls forÂ Israel’s elimination.

Then there is Abraham “Dishonest Abe” Oz. He must be crying as we speak.

Oz tried to organize a Nabka day at the University of Haifa. He worked with fellow professor Ilan Pappe drumming up support for Pappe in the infamous “Tantura Affair” fabrication. (Pappe and a student invented a non-existent “massacre” of Arabs by Jews, and had their legal defense fees financed in part by the PLO.)

With the death ofÂ Ziad Abu Tir, especially so soon after their buddy Yassir Arafat, people like Neve Gordon and Dishonest Abe must be inconsolable.Â May I recommend that you send an email of mourning to NeveÂ ngordon@bgu.ac.ilÂ andavitaloz@research.haifa.ac.ilÂ and other leftist professors, please don’t be nasty, just acknowledge the fact that they must be so terribly sad now that there are fewer terrorists in the world.Â