Now the whole story of theÂ Saudi girl who got Olympic rules changed so she could compete in judo wearing a hijabÂ becomes clear. She has only been practicing judo for two years, and is only a blue belt. She was only in the Olympics by special invitation.

In today’s UK, there is no place forÂ Â “inclusivity” and “diversity” for Â non-liberal, non-leftist, native Britons.

When you have Â Muslim Brotherhood headbanger Â Dr Muhammad Abdul Bari sitting on the board of the London Organising Committee of the Olympic Games (LOCOG) â€” you know things have gone ‘Asian’, which is code for Islamic.

As a follow-up to hisÂ post on Monday, Paul Weston casts a critical eye at the ideology of the opening ceremony for this summer’s London Olympics. 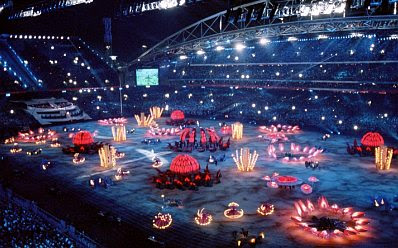 London’s Marxist Multicultural Olympics
by Paul WestonI really don’t want to sound like a summertime Scrooge, but am I alone in thinking the London Olympics’ opening ceremony was an overtly Marxist, puerile, adolescent, racist and deeply shameful representation of Great Britain? For all the boasts of “inclusivity” and “diversity” I felt deeply excluded as a non-liberal, non-leftist, native Briton.As it happens, I am not quite alone. Eighty-five percent of the British population thought it was wonderful, whilst only fifteen percent thought it essentially an orgiastic celebration of politically correct, Big State Socialist, anti-capitalist, anti-white, anti-culture, anti-monarchy, dumbed down, mawkish left-wing propaganda.
Only fifteen percent were capable of seeing such obvious political reality! This is a remarkable testament to what decades of subtle liberal/left propaganda can achieve â€” indeed has achieved. Whilst the battles continue, the culture war appears over. The left has won, which is hardly surprising when one considers the stranglehold they have over television output and education.The London Olympics were politicised from the outset, and the overriding ideology was that of multiculturalism â€” whether you liked it or not. We even have the Muslim Brotherhood sympathiser Dr Muhammad Abdul Bari sitting on the board of the London Organising Committee of the Olympic Games (LOCOG) â€” which goes some way toward explaining LOCOG’s following statement:

“Diversity was a key reason why London, one of the most multicultural cities in the world, was chosen to host the Games in the bidding process.”

The liberal/left are obsessed with multiculturalism, which they promote with a hysterical fervour. In post-Christian Britain it is now the new religion and all dissenters are heretics. But multiculturalism has many drawbacks, all of which go unquestioned even when truly terrible events reveal multiculturalism to be an unmitigated disaster.

London won the Olympics on the 6th July 2005, and won it because of its commitment to multiculturalism. Less than twenty-four hours later our multicultural capital city fell victim to monocultural Islam, four followers of which self-detonated on our transport systems, taking with them fifty-two innocent lives and maiming seven-hundred-and-seventy.

If ever there was an argument against multiculturalism, this was it. But instead of questions there came an ever-further commitment to multiculturalism, culminating eventually in a sporting event involving rapier anti-aircraft missiles, HMS Ocean’s attack helicopters, Tornado fighter-bombers and thousands of soldiers. In order to stage an athletics event committed to the wonders of multiculturalism we have to deploy a good chunk of our military to defend it from the inevitable consequences of multiculturalism.

Everything, absolutelyÂ everythingÂ about the London Olympic Games revolves around multiculturalism. LOCOG put itÂ thus:Â “We aim to make diversity and inclusion a key differentiator of the 2012 Olympic and Paralympic Games. It’s not simply about recruiting a diverse workforce, it’s about the suppliers, competitors, officials and spectators â€” in fact, everyone connected with the Games, from the security guards to the bus drivers.”

We are all aware of the scandal caused by the security firm G4S who failed to recruit enough people to protect the games. Thankfully the army was called in to do their job for them, but it does raise the question as to why they failed on such a massive scale. Was it because they sought to mainly employ ethnic minorities as per their multi-culti commitment? If this is the case will there be an investigation? I doubt it. No matter the catastrophe, Thou Shalt Not Question The Multi-Cult.

There has also been a scandal about the empty seats. Here is LOCOG again on their ticketing ethos:

2 thoughts on “Olympics: Thou Shalt Not Question The Multi-Cult!”