Russia gives Obama a way out

Robert Spencer in PJ Lifestyle: Proving Their Manhood in Syria

Russia knows that the only thing Obama is concerned with saving is face.

Our enemies know he is weak and feckless and couldn’t possibly have the courage of his convictions, because he hasn’t any.

There was a time when rogue states would turn over their arsenals to us (ie Gaddafi). Oh, how the mighty have fallen.

Russia calls for protection of Christian holy places in Maalula

Moscow, September 6, Interfax – The Russian Foreign Ministry has expressed concern over the attempts made by the armed opposition in Syria to take over the city of Maalula, a symbol of the Christian presence in Syria.

No matter how low the blow, libtards can always do you one up:

Shrillary in the bag for Huma:

Hillary Clinton Backs Obama: ‘This Is About Protecting Both the Syrian People and Our Friends in the Region’ 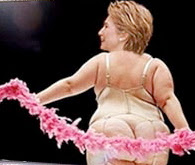 May further complicate the Obama administration’s efforts to recruit support for a military strike from Congress and foreign allies.–ReadÂ MoreÂ Â»

Once again, the best thing on TV over the weekend was Obama’s weekly appointment behind Jeanine Pirro’s woodshed: (Moonbattery)