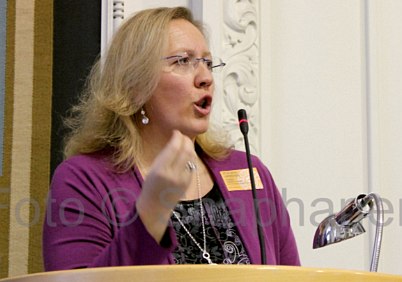 Tundra TabloidsÂ live-blogged the storyÂ earlier this morning. Here’s what happened (times are in CET).

Her lawyer told her this is to seen as a very positive sign as the court could have and would have thrown out the case in written form. So, we may assume that the case will not be thrown out. This leaves the following two possibilities:

The main question to be discussed is the merit/of what Elisabeth said. Does freedom of speech trump religious teachings?

If the case is lost in Austria, it would be taken to the European Court of Human Rights, where the chance to win is very good. And winning it at the ECHR would have positive implications for free speech, includring the right to critize religion, all through Europe.

The hearing is delayed due to the Public Prosecutor missing the 10 o’clock starting time. The Court starts with making a summary of previous proceedings, including the conviction of a â‚¬ 480 fine or 60 days in prison for violation of Article 188, denigation of a legally recognized religion.

The Defence, Dr. Rami, presents his case, that since the statements of Elisabeth are based in documentation, they cannot be punishable under the law, as it does not constitute denigration.

He refers to the case of Salman Rushdie and his book “The Satanic Verses”, which would also be shocking to the 1.5 billion Muslims in the world, and to the Danish Mohammad cartoons, which were explicitly meant to mock the beliefs of others. Those cartoons led to extensive riots and many deaths, a clear sign that Islamic forces seek to limit our freedom of expression, in particular as it pertains to Islam.

Dr. Rami also refers to two similar cases which led to aquittal, despite broad negative portrayals of religions, including stating “Christianity is permeated by anti-Semitism”. What is on our desk today is benign compared to this. Further, the disputed statement (if Mohammad could rightly considered a paedophile or not) is a mere detail of a seminar about the foundations of Islam. And, as has been stated earlier, the idea that Mohammad was a paedophile makes sense in light of him having sexual relations to a minor (Aisha), as documented in Islamic scripture.

Finally, the whole point of freedom of expression is that it must be permissible to say things that cause offense, shock and unpleasent reactions among some listeners.

For the reason above, the Defense proposes that the Court delivers an unconditional acquittal.