A worthwhile article and video on the 1st amendment German media attitudes towards American free speechÂ and freedom activism. It should be noted that there was quite a bit of intentional deception used against Pamela Geller by the German media in this clip. (Vlad Tepes)

From the poofty TV moderator Ralph SzepanskiÂ (‘tasteless’) to the twisted views of the journaillie, Â Elisabeth KoblitzÂ Â (‘a screaming provocation’) they really don’t get it; refuse to get it and deliberately keep looking (and find one Jewish Moonbat) Â who also doesn’t get it. Finally they land in some slick imam’s mosque who tells them the lies they want to hear. How’s that for reporting?

Finally, the reporting twat seems to believe that vandalising the placards is also allowed under freedom of expression, something that got Mona Eltahowitzer into deep doodoo.

Germany is in deep shiite.

The German public broadcaster ZDF evidently thinks that Americans have too much freedom of speech. The issue in question concerns the famous photo of a meeting between Haj Amin al-Husseini, the Grand Mufti of Jerusalem. The Grand Mufti and the FÃ¼hrer are currently making a joint appearance in anti-Islamic posters on the sides of buses in Washington D.C. as part of the latest bus-ad campaign sponsored byÂ Pamela Geller.

Our Canadian correspondent Rembrandt Clancy has translated and subtitled ZDF’s news report about this egregious abuse of free speech, and accompanies it with his own introduction. 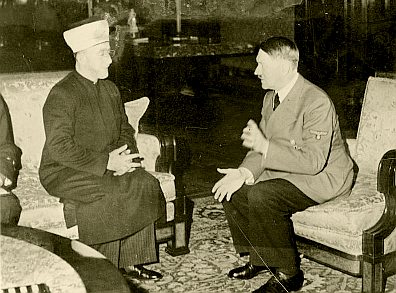 “Enemy of Islam” shocks the ZDF â€” “Tasteless Opinion Making”Â is the title given to a posting which appeared on the German Internet portalÂ Politically IncorrectÂ (PI) on 21 June 2014.

The article features a news segment by one of Germany’s public broadcasters, the ZDF (20 June 2014). The theme of the newscast is an attack on Pamela Geller’s bus-banner campaign in Washington D.C., which features the collaboration of the Grand Mufti of Jerusalem, Amin al-Husseini, with Adolf Hitler in 1941. What is more striking, however, is the broadcaster’s hostility toward freedom of speech generally and the American First Amendment in particular.

In addition, the PI article draws attention to the following points: the ZDF journalists’ personal, verbal attack on Pamela Geller; the broadcaster’s labelling the ads as tasteless without acknowledging their historical veracity; the implication that Islam knows no Jew-hatred; the oblique call for sabotaging the ads; and, by way of the tenor of the newscast, Germans are fortunate to have no such freedom of speech as in America. Finally, the PI author notes a contradiction: the moderator, Ralph Szepanski, begins by suggesting that “hardly anyone” in America seems to care about what would be “unthinkable” in Germany, and even “punishable” there; but at the end, the reporter, Elisabeth Koblitz, informs the viewer that “…the Islam-hater has started a wave of protest rolling on the Internet.”

The video (translated and subtitled by Rembrandt Clancy):

The USA is happy and proud to call itself the land of unlimited possibilities. That unfortunately applies to tasteless opinion making. Thus a well-off but not well-meaning right-wing conservative sends Hitler-buses through the American capital.

The advertisement on the vehicles? … Jew-hatred is in the Koran, Islam has always been anti-Semitic. What would be unthinkable and punishable for us, perturbs hardly anyone there. From Washington, Elisabeth Koblitz reports.

No! This is not Berlin in 1936, but Washington in 2014: An advertisement with Adolf Hitler in the American capital. On 20 buses, it is a rolling provocation. Many passengers can hardly believe it!

“I am Jewish myself and I find it hurtful. To see Hitler’s face is always an insult. One cannot simply rub our noses in such a sensitive subject.”

Responsible for the campaign is Pamela Geller, an anti-Islam activist. Her message: Palestinians made a pact with Hitler, for that reason, the USA should stop their financial aid to Islamic countries. That her action is being criticised, she does not understand.

In the Islamic community in Washington, they are shocked.

“If you’re making a statement which does not correspond to the truth; that can and will hurt people. All as a result of that statement right there.”

Geller’s campaign is controversial in America, but permitted, for the First Amendment of the American Constitution guarantees almost unrestricted freedom of speech and of the press. “Hitler Mein Kampf” [sic] is easily ordered on the Internet. One may show the President with a Hitler-moustache, or on the radio compare Obama with Hitler. The Constitution permits exactly that. Unfortunately many find that fantastic as long as it corresponds toÂ theirÂ views.

But freedom of speech simply applies to everyone. The bus campaign of the Islam-hater has started a wave of protest rolling on the Internet. Already there are calls to paste over Hitler images. That too is after all freedom of opinion in the USA.