Sunday’s anti-Israel rally in Sydney attracted a somewhat smaller crowd thanÂ last week’s, but the flags, placards and sentiments were much the same. 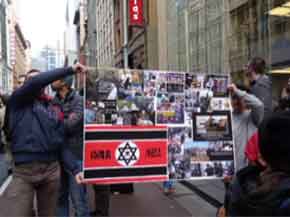 Flags again dominated the scene – I counted about ten black flags of Jihad, ten yellow flags of Hezbollah, as well as Palestinian flags, and an assortment of national and non-national flags. Conspicuously missing was an Australian flag.

Out of the blue, a brave young woman walked into the crowd flying an Israeli flag. She was about half-way through the crowd before she and the flag were tackled. Police charged in and escorted the woman to safety.

Far beyond simple expressions of support for Gaza and Palestine, and opposition to Israel’s actions, many of the placards descended into anti-Jewish themes.

Holocaust inversion and minimisation were common motifs. Words included “Israel: using one Holocaust to continue another since 1948”, “One Holocaust doesn’t justify another” and “Netanyahu: modern day Hitler”. Others had “Stop the Palestinian Holocaust” with a Star of David = Nazi flag, and “Zionists end the Holocaust in Palestine” with a Star of David crossed out. Another was “Zionist Jews are Godfathers of terrorism. You’re devoid of humanity…” and “You will be defeated and gathered together to Hell”. Another was “Israel is the Anti-Semite”.

One image played directly to the Blood Libel (the myth that Jews use the innocent blood of non-Jews for religious rituals). It was an image of Bibi Netanyahu with blood dripping from his mouth and holding a blood-spattered child. A Star of David was stamped on Netanyahu’s forehead. Above the image were the words “Can’t get enough”, the implication being not enough blood. Below the image were the words “Save Palestinian Kids.” For millennia, Jews were falsely accused of killing gentile children and drinking their blood, leading to massacres of whole Jewish communities. This libel has been adapted for contemporary purposes to foment racism against Jews, both Israeli and in the diaspora.

Two distinctive aspects of this pro-Gaza protest were (i) the almost exclusively Islamist nature of the language and the absence of liberal-humanist themes and (ii) the role children played in the rally and march. As people gathered for the march, small children held up placards of photos of dead babies, often with grotesque injuries. At one point the march was led by a row of six or seven children holding a banner. In the march, there were mock-ups of dead children wrapped in keffiyahs and white cloth and carried on white funeral stretchers. Back at Town Hall, some children spoke briefly from the podium, and shouted “Takbir” to which the most of the crowd responded “Allahu Akbar”. After the rally was over, and the crowd began to disperse, seven children stood alone on the front steps of the Town Hall holding the placards of dead children and posters of The Greens logo.

The blatant racism reached its apogee on theÂ FacebookÂ event page of the Palestine Action Group (PAG), the organizers of the rally. Comments include “Our compensation will be the extinction of the Jews. It’s a harsh and bitter truth but the Jews are responsible for the mass genocides upon the Islamic Ummah around the globe”, “Israel… represents evil and murder and genocide and racism and death” and “Zionism is the cause of all the wars in the world.”

Other comments included “History repeats itself as foretold in the Quran about the Jews, they have always been bloodthirsty and killing and expelling people from their homes…”, “I wanna just to have a fight with Jews”, “the Zionist owned media”, and “I’m still shocked at how the Jews turned into the Nazis”. Some comments suggested the rally should be held in the “eastern suburbs” where many Jews live.

One particularly vile comment was “I value the lives of every Arab child you are murdering infinitely more than your stinking religion and tribe, festering under the weight of three thousand years of chauvinism and narcissism, whining about the holocaust while committing a holocaust in Gaza. You are not God’s chosen people. You are a vile obscenity before God, and an insult to everything that’s good and decent.”

These were all comments made in the week in between the two protests on 13 and 20 July. Comments made after this last protest include “we all know jews have all the money in the world” to which someone else responded “oh yeah i forgot thats why hitler did wht he did”.

There were suggestions by one or two posters on the PAG event page for people not to make antisemitic comments and not to bring antisemitic posters, including any with references to Nazism, to the rally.Â  It was all in vain. These voices were swamped in a tsunami of Jew-hatred. One person openly advertised where to get more posters equating Jews with Nazis.

Speakers at the rally included a Greens State MP, David Shoebridge, the Sydney Branch Secretary of the Maritime Union of Australia, Paul McAleer, and a Christian clergyman, Father Dave Smith. All spoke quite happily surrounded by the black flags of jihad, the yellow flags of a banned terrorist organisation, Hezbollah, the Islamist chants and placards spewing antisemitism. 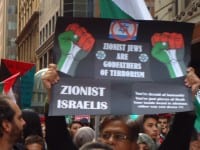 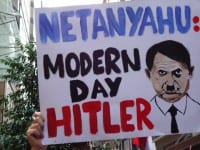 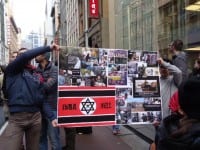 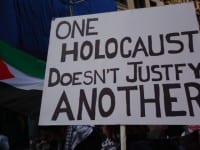 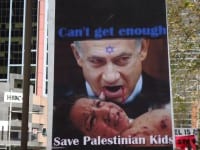 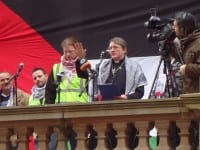 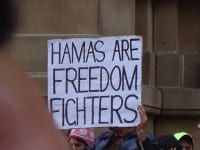 One thought on “Zionhass flies high at Sydney rally”