The bullshit merchants are out in force:

Our Hamas grand mufti said politicians and the media must not use the raids to inflame hatred of certain segments of the community.

Translation: we must not hate MohammedanÂ head choppers like they hate us, that would be ‘counterproductive’……

‘The focus of attention should be on the alleged criminality of those involved and not on rhetoric which serves only to promote disharmony,’ Dr Mohammad said. …More harmony promo atÂ Echo Netdaily, thanks to Mullah, pbuh

More ‘extremists will win if we backlash against them’ atÂ SBS

It’s in the interests of Islamic State for Muslims in Australia to be attacked or for their mosques to be attacked, because doing so would help divide the Australian community. But we should be very clear: the only people who win if Australia is divided are the extremists. … (Me thinks Nick O’Brien is extremely stupid)…

Senator Christine Milne, the leader of the opposition Greens Party, warned about the risk of alienating and perhaps radicalising elements of the Muslim population. —Watermelons obsessed with the fear of alienating “Australian” muslims

The litany of stupidity

As police officers were carrying out the largest anti-terror raids in Australia’s history yesterday, I went out on a limb and made a really bold prediction: the next 24 hours would see all sorts of people in high places fall over themselves to absolve Islam of all responsibility.

Actually, it wasn’t that bold at all. Blind Freddy could see it coming. In fact, this woeful prayer to Islam has been underway for quite some time.

Exactly one month before the arrest of Muslims for planning to behead random Australians at the behest of the Islamic State, the bleeding-heart Christian churches launched an expensive and well-advertised campaign calledÂ “We’ll love Muslims for 100 years”. And it says:

“We believe people of Muslim faith are being unfairly smeared in the eyes of the Australian public by both subtle and overt links to violent extremism in political and media discourse.”

It really was a case of great timing.

Unfortunately, I am not sure these churches have done anything so spectacular to help actual Christians in Iraq that are unfairly and not-too-subtly losing their homes and heads at the hands of devout Muslims.

Just as an aside, Christianity involves loving everyone, all the time. Not just for 100 years. But this does not mean loving their actions and beliefs as well. They can quite rightly be condemned. And true love requires this, so the person can move onwards and upwards from destructive behaviour.

Perhaps if the ‘Christian’ churches knew their own faith, they might not be such great apologists for other people’s violent ideologies.

The good news is that even with names like Ma’en Abdulla (Director of AussieMuslims.NET), Faizel Jassat and Mahomed Ismail (Proud Australian Muslim) the petition launched by these churches has reached just over 2,100 signatures.

In contrast,Â a petition I launched two weeks laterÂ and without the same expensive fanfare has attracted almost the same level of support. So imagine what useful things these ‘churches’ could do if they actually put their resources into worthwhile causes: like calling for the scrapping of anti-discrimination laws that are being used to protect the right of homosexuals to expose themselves to children at ‘gay pride’ parades. For those unaware, I am now facing fines of $100,000 because the NSW Anti-Discrimination Board believes that I vilified homosexuals by describing people who do this as perverts. You can read about itÂ here. 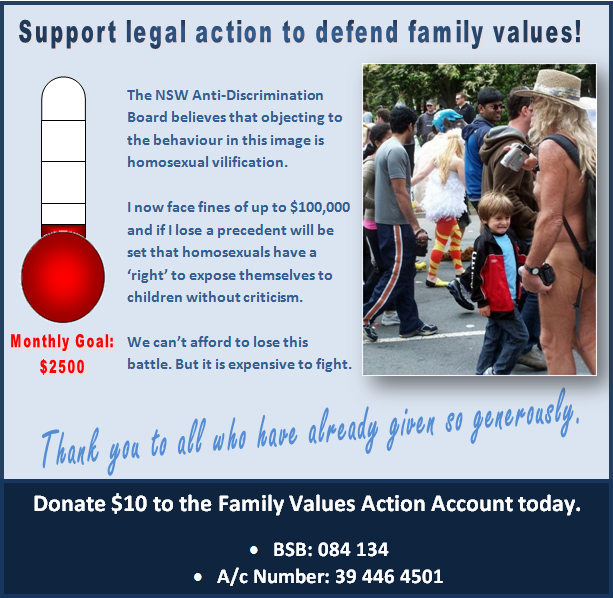 But back to the litany of stupidity. And here it is:

“The suggestion that mainstream Islam is anything other than a religion of peace is arrant nonsense,” he said.

“Islam is one of the world’s great religions.”

Tony Abbott (Prime Minister)Â – speaking about Cory Bernardi’s advice to do something useful toimprove security and ban the burqa:

“This is not about people’s religion, it’s not about what people wear,” he told reporters in the Northern Territory.

“It’s about potential terror attacks here in Australia and that’s what we’ve got to guard against.”

Opposition Leader Bill Shorten has described Senator Bernardi as a “rogue” and his comments as “stupid”.

“Why on Earth is this out-of-touch, out-of-line senator on a rampage with his ignorant and stupid comments?” Mr Shorten said.

“This senator’s comments should have no part to play in public life, fuelling fear and suspicion as opposed to tolerance and understanding.”

Attorney-General George Brandis, who has been meeting with Muslim leaders in recent months, backed the Prime Minister’s view.

“All of us as Australians are potentially victims of these wicked people, but the Muslim community in particular is exposed,” Senator Brandis said.

“Therefore, the steps that we are taking and the legislation we are preparing in consultation with that community in particular, is designed to protect them, to protect them and their interests and their communities.”

“And the problem is not because of Islam, it is because of geopolitics and the international relations of current times.”

“I would encourage Queenslanders who love our democracy, who love our multicultural community to actually turn up as a gesture of good faith,” Mr Newman said.

“As a gesture of fellowship to show the people in that community that all Queenslanders on the whole, are right behind them 100 per cent and understand exactly the difficult issue that confronts us all.

“So that’s probably the way that I’d put it, that Queenslanders other than Muslims should turn up and go to these mosques as they’re opened up to see firsthand, but more importantly, to actually demonstrate solidarity with them.”

Of course, all this comes just after the Greens Senator,Â Peter Whish-WilsonÂ even went so far as to suggest earlier this month that the terrorists weren’t Islamic State jihadis, but our own military. And just a few days ago, Clive Palmer, the billionaire who doesn’t stand down to anyoneÂ stood down to Muslim community leader, Keysar Trad. Because Mr Trad said Muslims wouldn’t vote for his party. All 2 per cent of them. So Palmer backed away from Senator Jacqui Lambie’s comments that those who support Sharia Law should pack their bags and leave.

In the midst of all this madness, Royal Australian Air Force personnelÂ were farewelledÂ yesterday for their mission fighting overseas. Against the Islamic State. Islamic being the key word. Meanwhile, back in Sydney, Muslims wereÂ protesting against the terror raidsÂ and claiming that they were anÂ attack on Islam.

Presumably, the Islamic State has vague notions of establishing some kind of nation run on Islamic law. I imagine if that was not their goal, they would have called themselves something else. Like the Bunny Rabbit and Flowers Nation.

And presumably, if we are sending our military overseas to bomb them it’s because we have some kind of a problem with the Islamic State and its ideas. After all, yesterday’s commotion was because the Islamic State was directing its boys in Sydney to take bloody action.

But if you go off the statements of the people running the joint, Islam is not the problem and we should all go and spend some time praying at the local mosque. So don’t hold your breath expecting victory against Islamic violence any time soon. Our leaders are actually promoting this religion, even while it takes action to destroy us. 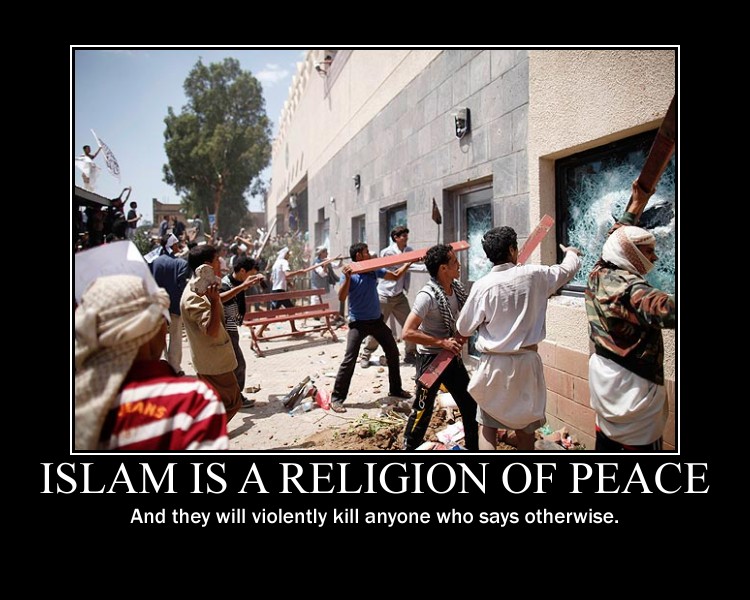