“Freedom of expression is the lifeblood of democracy, But…” 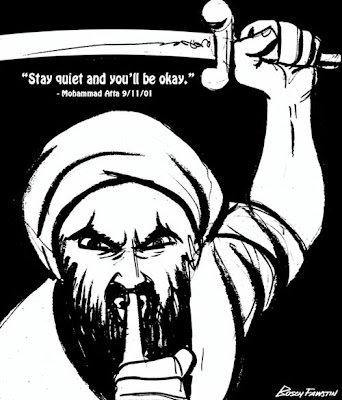 A must read from Mark Steyn.   (Thanks to Israel Matzav)

If the American press were not so lazy and parochial, they would understand that this was the third Islamic attack on free speech this year – first, Charlie Hebdo in Paris; second, the Lars Vilks event in Copenhagen; and now Texas.

The Washington Post offered the celebrated headline “Event Organizer Offers No Apology After Thwarted Attack In Texas“, while the Associated Press went with “Pamela Geller says she has no regrets about Prophet Muhammad cartoon contest that ended in 2 deaths“. The media “narrative” of the last week is that some Zionist temptress was walking down the street in Garland in a too short skirt and hoisted it to reveal her Mohammed thong – oops, my apologies, her Prophet Mohammed thong (PBUH) – and thereby inflamed two otherwise law-abiding ISIS supporters peacefully minding their own business.

It’ll be a long time before you see “Washington Post Offers No Apology for Attacking Target of Thwarted Attack” or “AP Says It Has No Regrets After Blaming The Victim”. The respectable class in the American media share the same goal as the Islamic fanatics: They want to silence Pam Geller. To be sure, they have a mild disagreement about the means to that end – although even then you get the feeling, as with Garry Trudeau and those dozens of PEN novelists’ reaction to Charlie Hebdo, that the “narrative” wouldn’t change very much if the jihad boys had got luckier and Pam, Geert Wilders, Robert Spencer and a dozen others were all piled up in the Garland morgue. —Read the whole thing.

Megyn Kelly Nails It With One Question

The First Amendment is meant to protect ‘the most outrageous, offensive, incendiary speech”

Appearing on The O’Reilly Factor, Megyn Kelly passionately defended Pamela Geller’s  free speech right to have the event, provocative or not.

Kelly argued that no matter how “offensive” the actions by Pamela Geller’s cartoon drawing event might be to Islamic jihadists, there was no excuse for the gunmen’s attack outside the center where the several hundred people in attendance were concluding their event.

Kelly challenged Bill O’Reilly when he wondered aloud if there weren’t a better way for the group to make its point, rather than to “light the fuse,” after which violence explodes.

“That’s the path we’re going to go down if we start catering to the jihadis.”

“…the point they were making about free speech was a solid one. The First Amendment, she said, isn’t meant to protect popular speech; it’s meant to protect ‘the most outrageous, offensive, incendiary speech.’”

3 thoughts on “They want to silence Pam Geller”