The latest essay by Anestos Canelides looks at the massacre and expulsion of the Greeks from Turkey as part of the larger picture of the Great Jihad. 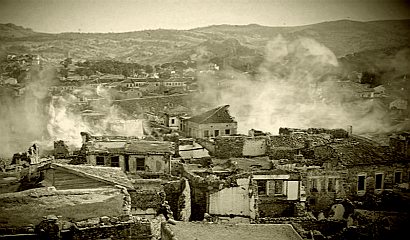 I have never published anything in the first person, but this is the only way I can truly express my feeling about Political Islam and the actions of Muslims for the last 1400 years against the Kafir.

My grandfather or Papou, on my mother’s side, came to America in 1919. I know little about his past except that his parents were murdered by Muslim Turks about 1905. They lived in a small suburb outside of Edirne, Turkiye. At age eight, while he was in boarding school in Greece, the Turks attacked the Greeks in his village of Orestiada, leaving him an orphan.

Later on Kemal Atatürk deported over a million and half Greeks. This was due to both Islam and Turkish nationalism. The same expulsion of the indigenous Greeks would again happen in 1955 and 1961 when the Turks forced thousands of Greek out of Istanbul (Constantinople). This was also repeated on the Greek island of Tenedos and Imbros, as well as Cyprus.

In an essay by Dr. Rich Swier entitled “Fitnah is Worse than Slaughter”, he defines two words to explain the reason why slaughter and expulsion of the native non-Muslim population occurs, unless they convert to Islam. According to Dr. Swier the two tactical verbs that that found in the Qur’an are kill/slaughter and displace/drive out/expel. According to Dr. Swier, “My three-fold reason for this is that the verbs Qital and Kharaj are not only much more violent than Jihad, but they are much more graphic and violent than the word Jihad.”

After the 1071 defeat of the Byzantine military, under the leadership of Emperor Romanus IV, by the Seljuk army, the Roman territory in Anatolia was left undefended. In a short period of time hordes of Muslim Turkish migrants began to invade Roman lands. This invasion not only brought slaughter and devastation to the native Christians, but complete destruction of their towns and cities, forcing thousands of Greeks to flee to lands still under Byzantine control. In the process of Islamic conquests by the Seljuk Turks, we see Qital or as defined the slaughter of the Kafir or unbeliever. Along with this we see Kharaj, or the expulsion of thousands of Greeks — if they were lucky enough to escape death or slavery.

Destruction and plunder along with indiscriminate slaughter were part of these barbaric conquests by the Seljuk Turks. In addition to outright slaughter there was depopulation of the lands and towns the Muslims invaded. According the Dimitri Angelov, “The Turkish invaders mercilessly crushed any attempt at resistance and put to death the entire male population of those places that had refused to surrender.” The conquest brought Qital or slaughter as well as enslavement of the defenders. “This conquest had as a result the massive destruction of material goods, the ruination of entire cities, the Massacre (Qital), deportation(Kharaj) of thousands of inhabitants.” In short a complete loss of the productivity of the land.

The expulsion and slaughter of the Greeks and other ethnic groups accelerated after the loss at Manzikert and continued on to the Turkish conquest of Anatolia and later the Balkans, all the way to the gates of Vienna. The Turks did not expel all the Christians or Jews, but allowed some to stay as a source of labor and tax revenue — what is referred to as Dhimmi status, a form of slavery. Dimitar Angelov goes into detail about the slaughter and expulsion, or Qital and Kharaj, of the native Balkan population in “Phases of the Conquest of the Balkan Peoples” found in The Legacy of Jihad by Dr. Andrew Bostom.

The study of history is supposed to teach mankind not to repeat history, but it appears with the mass migration Muslims into Europe that the elite of Europe have forgotten history — or they are ignoring it for their own globalist agenda.

I am convinced that as their population grows more and more, Muslims will demand that we change for them, and they will slowly create a hostile environment towards the Kafir. I would like to believe that force behind this is not all Muslims. However, their ability to lie to the Kafir — known as Taqiyya and also Kitman, the ability to twist the context of the Qur’an to further the cause of Allah — makes it difficult to know who is a friend or foe of our liberty and our Constitution.

I believe the goal of political Islam today is not only to reclaim former Islamic lands but to expand Islam into the lands of the Kafir and dominate. As in the time of Mohammed, there are no moderate Muslims amongst the true followers of Mohammed. Even Dr. Zudi Jasser from the American Islamic Forum for Democracy, an Islamic reformer, states that his views are not accepted by many Muslims in America.

Can Islam be reformed, or will Muslims try to reform Americans to submit to Sharia Law? Mohammed the perfect man had no concept about being moderate, nor did his true followers, or Sunna.