One of the characteristics of Shariah law — which makes it different from the law of any other religion — is that it must be imposed upon Muslim and non-Muslim alike. It doesn’t matter whether you are a Muslim or not — you must submit to Islamic law; it is the commandment of Allah. Those who have said the shahada and submitted to Allah will wage violent jihad against you until you obey, or are dead.

A recent example of infidels acting in obedience to Islamic law may be seen in this poster put up by Médecins Sans Frontieres (Doctors Without Borders) giving instructions to their workers in the refugee camps of Greece. This image was adapted from a photo taken by Véronique Saunier and posted at the Open Democracy website: 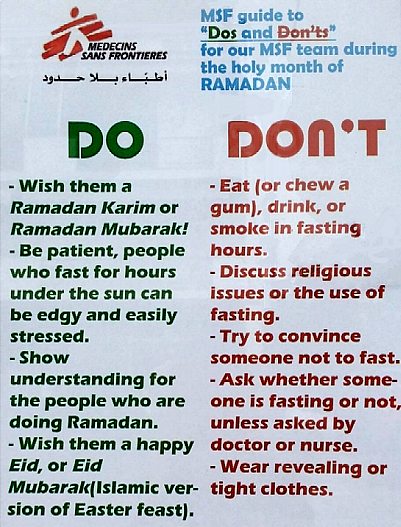 MSF workers are instructed not to eat, chew gum, drink, or smoke, nor “wear revealing or tight clothes” during Ramadan. But what significance do these Ramadan rules have for those workers, assuming they are not themselves Muslims?

Presumably the organization’s leaders want to “respect Muslims’ religious sensibilities” or something similar. But whatever their ostensible reason for doing so, Médecins Sans Frontieres is in fact enforcing Shariah law.

One more thing to notice about this poster is its assertion that Eid Mubarak is the “Islamic version of Easter feast”.

Until I read this, I had never known that Mohammed had laid down his life to atone for the sins of the world, and that Muslims celebrate his subsequent resurrection at the feast of Eid Mubarak. Did you?

How else could Eid Mubarak be equated with the Easter Feast?