Once again, the hide and the hubris of Muselmaniacs on display: just what in the world makes them think they can summons and grill  the immigration minister? What gives them the right to tell Minister Peter Dutton to “meet with us or be quiet?’

Lebanese Australians have demanded Immigration Minister Peter Dutton release the ethnic backgrounds of other criminal offenders or explain why he chose to “demonise” and “further alienate” their community in his comments to Parliament.

Mr Dutton said that the Fraser government had made mistakes in letting some migrants into Australia from the Lebanese Civil War in the 1970s, referring to advice that 22 of 33 terrorism offenders were second and third-generation Lebanese-Muslim Australians.

Lebanese Muslims have hit back at Immigration Minister Peter Dutton after he said too many were let in to Australia and linked them to homegrown terrorism.
.

Bill Shorten is “sneaky and tricky” according to Peter Dutton who believes he’s been misrepresented by the Labor leader.

Ethnic communities are mobilising against Mr Dutton with 30 Lebanese organisations, including the Lebanese Muslim Association and Lebanese Community Council, meeting in Auburn on Friday night to discuss his comments.

No. These “years of hard work” did not build anything. This is a community that has become a danger for us all. Their leaders need to be put on the stand. It is high time to call them out, to tell them to shape up or ship out.

One leader, who spoke on condition of anonymity due to the sensitive nature of his work, said Lebanese Muslims were over-represented in the criminal system but the comments were an unhelpful smear.

“If Mr Dutton wants to play this game perhaps he can release the top three cultural backgrounds of the perpetrators of domestic violence, drunken assaults, paedophilia and rape. He might find the numbers slightly over representative of his own cultural cohort – white males,” he said.

Its not a game, its deadly serious. Tu quoque (you do it too) is not a defense, its a logical fallacy.

In a fiery escalation of its response to Mr Dutton, the LMA demanded that Mr Dutton either meet with the community for an “open discussion” or “remain silent”.

How dare these despicable throwbacks tell a sitting minister to “remain silent”when he represents the interests of the people of Australia?

A spokesman said the fact Lebanese organisations have never been contacted to discuss the issues raised by the minister is “an indictment on Mr Dutton himself and his office”.

The minister doesn’t answer to Muslims. He answers to the people of Australia and to parliament.

“Mr Dutton is clearly not interested in having an open and honest discussion on the topic,” the association said.

“Mr Dutton and his office have gone so far as to block the LMA on social media platforms in an attempt to maintain his disregard for the community he so easily denigrates.”

“Block the LMA on social media platforms?” Unlikely. Mohammedans can use the internet just like anyone else.

The LMA listed 12 questions for Mr Dutton and said the “derogatory statements” have left the community “alienated and further marginalised”.

They are “alienated” -, they are aliens. Mohammedans are not “marginalized”:  they reject us, our society, our culture and civilization.

Several prominent Lebanese Australians tweeted their disgust at the comments including lawyer Adam Houda, who said it “plays right into the ISIS ‘us and them’ rhetoric”.

Fairfax Media reported on Friday that deradicalisation experts feared Mr Dutton’s comments would “create the terrorist of the future” by jeopardising crucial relationships with Islamic communities and families.

Beware of “deradicalisation experts”, they are naive tosspots who are clueless about the islamic game plan.

Labor MP and counter-terrorism academic Anne Aly said there has never been a successful or effective profile of “who becomes a terrorist”.

Give a Muslim a mosque, a qur’an, an imam and you got all that’s needed. Its not rocket science.

“Minister Dutton’s comments … show that he does not understand this most basic fact of counter-terrorism,” she said.

Perhaps the minister is wise enough not to buy his islam from a Mohammedan female who weasels and lies.

A spokeswoman for Mr Dutton said: “Neither the minister nor his office have received a request to meet with the Lebanese Muslim Association (LMA) to discuss their concerns.”

Which wouldn’t surprise anyone.

She added that the LMA has not been blocked on the minister’s social media accounts.

There you go. Lies, lies and more lies. 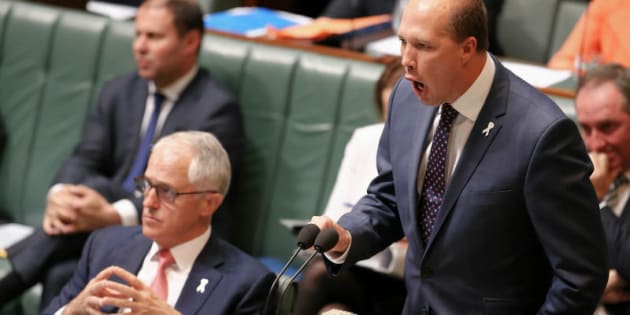 CANBERRA — The Immigration Minister has gone all out against criticism of his controversial comments singling out the descendants of Muslim refugees from Lebanon, saying he has “spoken the truth” and has accused Labor Leader Bill Shorten of being “tricky” and acting in a “dishonourable way” over the issue.

Peter Dutton insists he won’t step back from remarks that have hurt and angered the Australian-Lebanese community and let him being called “racist”, instead he’s continued link terrorism to second and third generation Australians, although he’s now stressing the “vast majority of Lebanese Australians are law-abiding, hard-working, good decent people”.

Last week, the Minister declared former Liberal Prime Minister Malcolm Fraser made a mistake in the 1970’s letting people of Lebanese-Muslim background into Australia from war-torn Lebanon. This week, he referred to security advice that 22 of 33 terrorism offenders were second and third-generation Lebanese-Muslim Australians.

Dutton insists he’s he is “not going to be dishonest in this discussion” and he has “spoken the truth”.

“The point that I was making is that we should call out the small number within the community – within the Lebanese community – who are doing the wrong thing,” he told Sydney radio station 2GB.

“If we do that, we can hold up the vast majority of people within the Lebanese community who work as hard as you and I do, who have contributed to society, who are captains of industry, people that have worked hard, provided their kids with an education.”

Dutton insists he’s “not going to be dishonest in this discussion” and he has “spoken the truth”.

“The point that I was making is that we should call out the small number within the community – within the Lebanese community — who are doing the wrong thing,” he told Sydney radio station 2GB.

The Greens have called Dutton racist and a bigot, while Shorten used his annual National Security statement to parliament to say he was “fearful” the Minister’s comments will be used by extremists to harm Australians.

Instead, Dutton has accused Shorten of misrepresenting his words and whipping up political hysteria.

The Immigration Minister condemned the death threats directed at Labor MP Anne Aly and her family after she took issue with the Minister’s comments, but used the moment to double down on the Labor Leader.

“He now has a track record of this”

“He might think this is tricky and maybe he thinks there is political advantage in it, but this man wants to be the alternative Prime Minister of this country and he is out conducting himself in a dishonourable way”.

Dutton also had scorn for people of “the left,” who “hate him” as they oppose the Turnbull Government’s immigration policies.

“I won’t cower to these people,” he told 2GB host Ray Hadley.

“Bill Shorten can carry on being part of the tricky elite in this country. He can talk double code to people, he can be tricky in his language. I’m not going to be intimidated by it”.

Labor MP Anne Aly and her family received death threats after she condemned comments made by Immigration Minister Peter Dutton about Lebanese-Muslims and immigrants.

.
We know that her claims are BS. If she had in fact received death threats, the police would be all over it.

4 thoughts on “Meet with us or be quiet: Lebanese community issues demand to Dutton”