Everything, every little bit of criticism about Isam is “playing into the hands of ISIS”. How many of our so-called “leaders” are spewing this nonsense already? Prime Minister Malcolm Turnbull has warned One Nation and his own outspoken backbencher George Christensen that demonising all Muslims is playing into the hands of extremist groups. “Tagging all Muslims with the crimes of a few is fundamentally wrong and it’s also counter-productive,” Mr Turnbull told commercial radio station 3AW.

“Seeking to demonise or denigrate all Muslims or seek to alienate all Muslims and suggest they’re somehow not part of Australia or shouldn’t be in Australia, that is exactly what the extremists and terrorists are saying to the Muslim community.”

One Nation leader Pauline Hanson delivered her first speech to the Senate earlier this week, warning Australia was “in danger of being swamped by Muslims, who bear a culture and ideology that is incompatible with our own”.

That, and only that, is the bitter reality that Turncoat and his muppets don’t want us to know.

“Much of our learning and culture came from the Muslims”–Turncoat.

The guy really hasn’t  got much upstairs.

She went on to call for a ban on Muslim immigration.

Mr Turnbull has rejected that position.

“I was asked about her [Hanson’s] views on migration and obviously everybody knows I don’t agree with them,” Mr Turnbull said.

Mr Christensen sounded his own warning about Islam in the House of Representatives last night, calling for immigration to be restricted from countries where violent extremism is prevalent.

He said many immigrants in recent years did not share what he called “Australian values”.

That’s a fact. Mohammedans do not arrive on our shores to become Australians, they come to make Australia islamic. They will kill and die for that. What are you prepared to do for what you believe?

“Why did they choose to come to Australia in the first place?” he said in the Lower House.

“There are other countries that they would find less offensive, countries where they could enjoy a similar level of oppression and violence to which they are accustomed, which they obviously want.

“It is not necessary to travel halfway around the world to come to Australia and demand that Australians change their culture, their society and their laws to match those of their former homeland.”

“He was talking about, as I heard it, Islamist terrorist ideology, and that is absolutely the focus of so much of our counterterrorism work,” he said.

Islam in Australia is the same disaster wherever Islam exists. To praise the soldiers of allah for following their genocidal belief-system doesn’t make them part of a successful society. Not in a thousand years.

Here’s the same thing from the Grunard:

In a week when Hanson called for a halt to all immigration and suggested every Muslim should prove they are not radical, the prime minister delivered a robust defence of the Australian Muslim community.

He warned of the danger of divisive anti-Muslim statements, including from his own backbencher Christensen.

After her first speech, the One Nation leader told Sky News she placed Muslims “all in the one basket” because it was impossible to define who was radicalised. Christensen said he was concerned at the rise of “Islamism” in Australia.

He told parliament on Thursday: “Many immigrants entering this country in recent years do not share our Australian values. 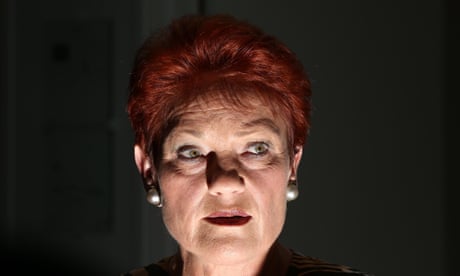 Politicians and Muslim leaders condemn Hanson: ‘She doesn’t know what she’s talking about’

Coming from a clown gallery of muppets, shysters & corruptocrats you have to decide who you should believe.

“There are other countries that they would find less offensive, countries where they could enjoy a similar level of oppression and violence of which they’re accustomed to what they want.

“It is not necessary to travel halfway around the world and come to Australia and demand that Australians change their culture, society and laws to match those of their former homeland.”

But, in an interview on 3AW on Friday, Turnbull said it was fundamentally wrong to tag all Muslims with the crimes of a few and it would be playing into the hands of extremists to alienate Australian Muslims.

“Tagging all Muslims with the crimes of a few is fundamentally wrong and it’s also counterproductive,” Turnbull said.

“Counterproductive” is the dumbest word ever in the vocabulary of those telling us we must not criticize Islam. What they’re really saying is we should go straight into a state of submission.

“The most valuable tool our security services have to keep us safe is intelligence. They need to know what is going on. The way they find out what is going on is talking to the community and in particular the Muslim community.

They won’t get any intelligence from the Muslim community. They stick to the OMERTA just like the mafia.

“Seeking to demonise or denigrate all Muslims or seeking to alienate all Muslims and suggest they are somehow not part of Australia or shouldn’t be in Australia, that is exactly what the extremists are saying to the community.

Nothing we can do to denigrate or alienate Muslims. They hate our guts and want us dead or forcibly converted. Their “extremists” are no different from their “moderates”.

“You are born here, you are part of the country, you are included and what we need is their support, as we need support from all Australians to work together to defend ourselves against terrorism.”

Turnbull said he was not going to “run a commentary on George” but immediately contrasted Christensen’s opinion with the government’s decision – taken under Tony Abbott – to accept 12,000 refugees from Syria. 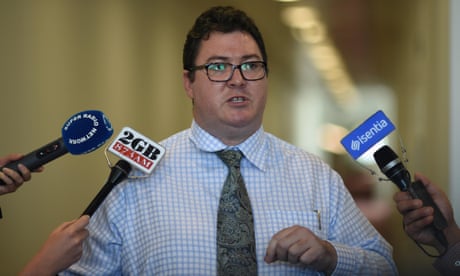 “There is no country in the world that is more racked by terrorism than Syria,” Turnbull said.

“We are taking a substantial number … 12,000 in due course, in one program alone from the Syrian conflict zone. These are people from oppressed minorities, these are people who have been victims of terrorism.”

To resettle Arab Muslims is a matter for Arab nations, not for infidel Aussies. We have no obligation whatsoever to settle Mohammedans down under. Those who inflict this on us are committing an act of high treason  against our people.

Turnbull said while Australia’s immigration policy was non-discriminatory, he acknowledged there was community concern about terrorism and that there were people in Australia who “seek to do us harm”.

The Turncoat gubmint squanders our money just like KRudd & G-Lard did. Worse, in fact.

“Having said that we pay great attention to security considerations and obviously with Islamist terrorism, and that is a fact, there is no point being mealy-mouthed about it,” Turnbull said.

“Not all of the terrorism in the world is motivated by Islamist ideology but a great deal of it is – in fact most of the immediate challenge in our region is motivated by that, so we do pay very close attention to security.”

Minimising it, talking it down? Leave that to Wally from the “Project”, Turncoat.

Christensen made the comments in the parliament’s adjournment debate late on Thursday.

.
“I am concerned about the rise of Islamism in this country and those who are willing to commit violence in the name of that ideology and I think we should consider some tighter controls on borders such as restricting immigration from countries where there is a high prevalence of violent extremism and radicalism,” Christensen said.

3 thoughts on “Turncoat: resisting Islam is playing into the hands of ISIS”