Your Government Hates You

Recently, it has emerged that there were not one, but four lily-livered police officers waiting outside that school in Florida during the shooting. They waited outside, listening as the school shooter tore up the building until cops from a neighboring county arrived, entered, and took the shooter alive without any further harm to either party.

You Know Who Else Supported Gun Control? Hitler. Get the Facts…
.

These people gave up their guns; that school was a gun free zone under the 1990 Gun Free School Zones Act. The shooter had made gun threats before. He openly spoke of his desire to do a school shooting. He was reported to the local and federal authorities repeatedly. Local and federal law enforcement had every legal power to take his firearms, prohibit him from firearm ownership for life, spy on his every movement, and lock him up for making credible mass murder threats. But they didn’t do that. Maybe they were too busy illegally spying on Trump. Then, to cap it all off, the individuals whose job description is to kill school shooters did a whole bunch of nothing instead. This isn’t a failure of law enforcement. A failure is when you land on your head in an Olympic ski jump competition. Not bothering to get out of bed on the day is something else entirely.

On the basis of publically available information, only one individual has had become unemployed over this fiasco. At the time, it was believed that he was the only one to sit outside the school with his pistol, allowing the murder spree to continue unabated. Given that the other three appear to still be employed at the time of writing, it seems that he didn’t lose his job because he didn’t do it, but because the media found out. Scott Israel is a far left politician in a sheriff’s uniform. The Broward County Sheriff’s Office is one of this nation’s largest, and needs a cop, not a political hack, at the helm. Israel must go.”

CNN held an event after the shooting called ‘107 minutes of hate against the NRA’. At that event, the top cop in the county, Scott Israel, argued strongly for more gun control. He said that ‘an 18 year old kid should NEVER have a rifle’, and that the country was in urgent need of more firearm regulations. He said this knowing that the existing gun laws were sufficient to prevent this specific tragedy, but they weren’t enforced. He said this knowing that four of his people could have brought the indiscriminate slaughter to an end much sooner but did not. He won’t stop bad people from having guns, his people won’t protect the public from bad people with guns, and his solution is to stop everyone other than criminals from having guns.

The take home message of all this is that cops are not in the business of protecting you. The cops are in the business of preserving the established order, and right now, the established order is a progressive Marxist one in which you don’t matter. There have been zero reports of dozens of heads rolling at the FBI. No one has been charged with criminal dereliction of duty, no one has lost their job, no one has lost their future government pension. This tragedy will happen again. It will happen again for the same reason it happened this time; criminal negligence on the part of the authorities, and CNN ‘journalists’ will cry a river over the need for more gun control, again.

P.S. When it’s a Mosque under potential threat, Broward County police encourage them to arm themselves to protect against mass shooters. As they always say, if lefties didn’t have double standards, they wouldn’t have standards at all.

P.P.S. CNN denied scripting the questions that the survivors asked at the town hall. CNN insisted that they would never do that and have never done so in the past. 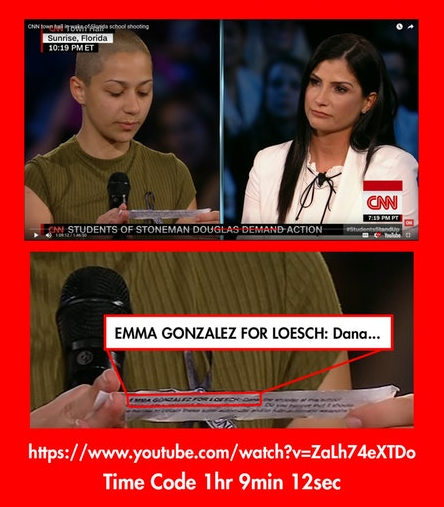 JudgeJeanine: “The first priority on an active school shooting is to stop the killing. You don’t wait for the SWAT team, you don’t hide behind a car. If you’re armed, whether as a school resource officer or first patrol officer, you go after and engage the shooter.”

Maryland Sheriff Says It Will Be CIVIL WAR Before Gun Confiscation Sherriff Israel is a democrat plant, as you can see here….

2 thoughts on “Give up your guns, they said…”