Germany is not dead. It just smells funny.

“Those who don’t love Germany need to leave”. A large demonstration of ordinary Germans in the town of Kandel took place on Saturday. Even Germany’s state controlled media can no longer hide the number of people taking to the streets to protest against Merkel and her destructive open border policies. Kandel is a symbolic location, as it is the place where a 15-year-old German girl was murdered by an Afghan refugee. At first German media talked about 1,500 protesters but as the police announced numbers of around 4,500 the tone changed quickly. However, YouTube and even the German police attempted to censor the march.

Many people were live streaming the march to prove that it was peaceful and to counter the mainstream media narrative of it being a “radical right-wing” march. Some of the chants included “Merkel has to leave” “We will not be silenced” and “Those who don’t love Germany need to leave”. 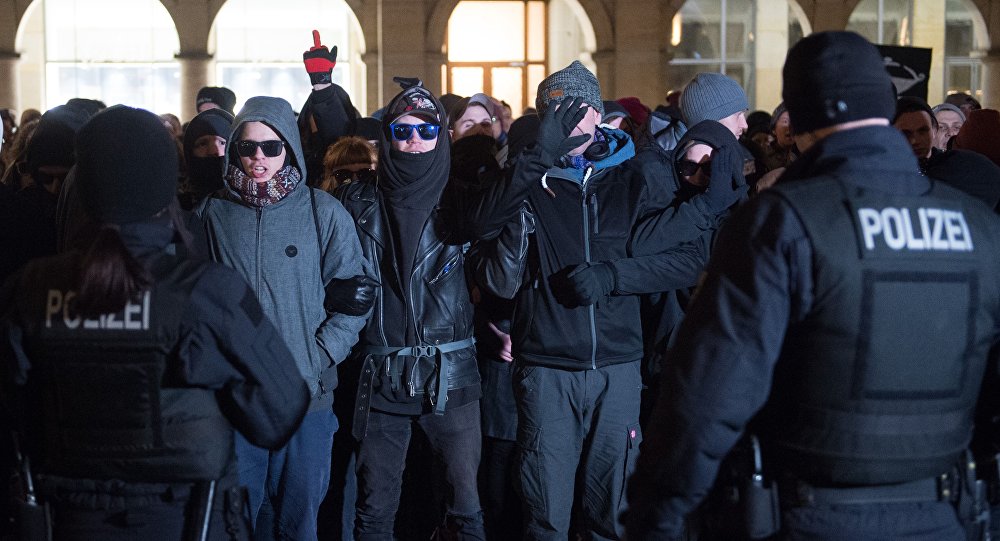 In late December 2017, a 15-year-old asylum seeker from Afghanistan killed a local girl of the same age in the German town of Kandel, sending shockwaves through the community.

A rally which brought together anti-immigration demonstrators in the German town of Kandel became violent when attendees encountered left-wing activists.

Protesters carried placards reading “Freedom instead of Islam” and “Merkel must go,” incited by the young girl’s brutal stabbing death, which occurred in Kandel in late December.

A heavy police presence failed to prevent clashes between the anti-immigration activists and participants of a massive leftist counter-protest in Kandel, who shouted slogans such as “Nazis out!” and “Together against racism!”

German news outlet Focus called it a march with around 1,500 “rechten”, translated as “right wingers” but the term is mostly used to call people Nazis without using the word.

YouTube even sank so low as to ban a live stream. It was by no means a radical one, but it was simply showing the march as it moved along. YouTube has made it a habit of deleting content they disagree with. Even big channels like Infowars are now up for deletion.

A reporter of RT-Germany and other journalists were even prohibited from filming a violent left-wing counter protest. The journalists claimed that Antifa harassed them and grabbed their cameras.

Instead of helping them, the police told the press they were not allowed to film there and would be arrested if they didn’t move away. This is counter to actual German law, in which it is a right to film at a public place and at a public event.

There was only one altercation and that was when the peaceful protest met left-wing extremists from Antifa. Only two people at the march of over an estimated 4,500 were arrested. The populist AfD party has announced another protest in spring in a bid for new elections, as the socialist SPD party broke another election promise and voted to join Merkel’s grand coalition.

While the establishment parties continue to break their election promises and continue to lose favour as recent polls have shown, the AfD is now polling as the second strongest party in the country with both the socialist SPD and Merkel’s CDU suffering losses.

These polls and demonstrations are a clear sign that the way Angela Merkel has been running the country is no longer to be tolerated. The growing anti-Merkel movement is up and running and it can’t be silenced!

Jeannette Auricht, member of the AfD (Alternative für Deutschland/Alternative for Germany) speaks at the Abgeordneten Haus of Berlin (House of Representatives) in the State Perliament (Landtag) of Berlin.

The theme, discussed on the 22. 2. 2018, is the Right to Demonstration. Are Greens and Left politicians making common cause with the Left Extremists, in order to kill off the democratic Right of Germans to demonstrate?

Antifa, together with Green and Left members of the German Parliament blockaded the Women’s March against imported violence against Women and Girls in Germany under the seemingly passive eyes of the Berlin Police.

One thought on “Germany revolts: “Merkel has to leave” & “We will not be silenced””