Under Muslim Mayor Sadiq Khan, the capital has seen the sharpest rise in knife crime in the country, rocketing by a massive 38 per cent in just one year.

HOW THE LEFT DESTROYS THE NATION As this wave of gun violence continues in gun-free London, Sadiq Khan is wasting valuable police resources by having police hunt down “islamophobic hate crimes,” i.e., people saying things that Muslims don’t like on Twitter, or at Speakers’ Corner in Hyde Park. The new priority for London police is making sure that people adhere to sharia blasphemy laws. And more sharia is coming.

They joined an entity that considers itself to be at war with Britain. They are traitors and enemy combatants. They held their British citizenship to be of no value until they were captured and needed it again to save their skins. And it wouldn’t be surprising if the thoroughly cowed and compromised British authorities capitulate and restore their citizenship.
.
From the Middle East:

So predictable. All media, most politicians & other virtue-signallers drinking in Palestinian propaganda. No questioning of deaths or injuries as asserted by Palestinians. No thought about possibility of videos being faked. Pavlovian condemnation of Israel is anti-Semitic.–Richard Kemp The attacker could turn out to be a “right-wing extremist,” but it should be borne in mind that last June, the Islamic State published a poster depicting an SUV driving over a heap of skulls and bearing the legend “Run Over Them Without Mercy.”

Or, given his odd “I’m a terrorist” shout, he could be a non-Muslim who sees who France’s new masters are, is impressed, and wants to get in on the action. 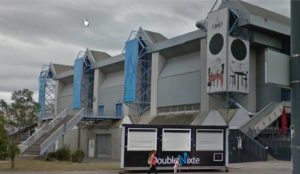 Still trying to figure out why Poland is so peaceful and safe?

Nigeria: Imam who raped and impregnated 14-year-old girl plans to marry her

NPR has a follow-up report on the predominantly Christian Iranian asylum seekers stranded in Vienna:

As Christians all over the world celebrate Easter weekend, dozens of fellow faithful are growing weary — waiting for the virtual gates of America’s refugee services to reopen.

More than 100 Iranian Christians and members of other religions have been stranded in Austria for over a year, after the U.S. program that welcomes religious minorities from Iran has all but shut its door under President Trump, refugee advocates say. Eighty Iranians who traveled to Vienna expecting to be resettled in the United States have already been denied asylum in America. Others are awaiting final U.S. approval.

The rejection puts the applicants at risk, has angered members of Congress from both parties and devastated U.S. family sponsors.