Just an “isolated incident”, nothing to worry about. Happens every day, or something….

An update on this story. The hijabbed Ayaan Ali screamed “Kill! Kill! Kill!” as she stabbed one man and tried to stab others. But the intrepid British police assure us that it was not an act of terrorism.

Well, then, what was it? Was it an act of jihad? Do the British authorities consider jihad violence to be terrorism? Do they believe there is even such a thing as jihad violence? Why was this woman screaming bloody murder, quite literally, and running amok in Barnsley? Was it “mental illness”? Why are British police being so unforthcoming about this case? Could it be that they have something to hide, some interest other than protecting the British people? 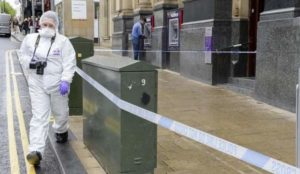 “Woman charged with attempted murder over Barnsley stabbing, as police rule out any connection to terrorism,” by Sarah Marshall, The Star, September 9, 2018, via Jihad Watch.

A 28-year-old woman has been charged with attempted murder and affray, following an incident in Barnsley that left a man with stab wounds.

Police charged Ayaan Ali, of Isleworth, Middlesex, has been charged with attempted murder, affray and possession of an offensive weapon and remanded in custody earlier today….

The force received multiple calls from around 8.20am yesterday morning, after one man suffered minor injuries following an alleged stabbing.

Chief Superintendent Scott Green, district commander for Barnsley said: “There remains a lot of speculation and rumour on social media, much of which is inaccurate and is creating a lot of fear and distress locally.

“While it would be inappropriate to provide specific information about ongoing legal proceedings, what I can clarify is that at this stage, there is absolutely no information whatsoever to suggest that this was a group attack.

“We’ve had officers scouring hours of CCTV, working in partnership with other agencies, to gather as much information as we can about the circumstances surrounding yesterday’s incident. We are satisfied that this was an isolated incident by a single person. We would therefore ask the public to stop reinforcing the rumour that there were multiple people involved.

“We can now also confirm definitively that this was not an act of terrorism.

“I trust that this offers some reassurance and closure to the Barnsley public after what must have been a very shocking day yesterday….

Matt Gladstone, Executive Director for Place at Barnsley Council, said: …”This has been an isolated incident in Barnsley and we’re pleased that it has been handled quickly and effectively.”…

One thought on “UK cops on Muslima stabber: “We can now confirm definitively that this was not an act of terrorism””