Sweden: Politician charged with hate speech for saying jihadis scream “Allahu akbar” before blowing themselves up

They do, of course, and other jihadis scream “Allahu akbar” before committing acts of violence. The Swedish authorities who are charging Christopher Larsson with “hate speech” are at war with reality, as are authorities all over the continent. 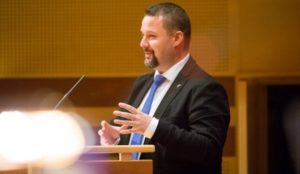 The group leader of the Swedish Democrats in Karlskrona City Council, Christopher Larsson, is charged with hatred against an ethnic group….

“The post connects the new minaret with terrorist acts. It begins with the phrase “A day of mourning occurs on Friday, when for the first time the chant of Allah is Great (Allahu Akbar) is heard for the first time. The same sentence ‘ Allah Akhbar ‘, is what islamalists scream when they explode in the air ‘, ‘ he wrote.

According to the prosecutor, Larsson has written an entry that identifies Muslims as worthy of blame by conceiving them as terrorists and as oppressors of women, claiming that their perceptions are medieval. 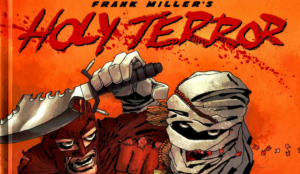 The Council on American-Islamic Relations’ Dallas-Fort Worth chapter (CAIR-DFW) recently “applauded a decision by the Plano Library to resolve an issue related to anti-Muslim material in its catalog.” CAIR claims to have convinced this Texas library to remove the book Holy Terror by renowned graphic-novel author Frank Miller, a disturbing act of censorship and a flagrant violation of longstanding library standards.

This author asked the Plano Library Director Libby Holtmann about the book’s removal. She stated that the library “did not remove the subject item from its collection from a request by anyone including CAIRDFW,” but rather “was alerted by a comment sent through social media.” Examination of Holy Terror revealed “that it did not have any professional reviews,” which she claimed is a “necessary component for maintaining an item.” She also cited library records showing little reader interest in Holy Terror.

In fact, dozens of reviews of the comic book have been published, including by prominent newspapers and peer-reviewed journals. Plano library’s dubious response leaves several troubling questions. What was this social media comment that led to an immediate “evaluation” of Holy Terror? Why does Plano Library appear to be kowtowing to CAIR? Does the very controversy itself surrounding Holy Terror raised by groups such as CAIR not justify keeping a copy for the sake of healthy public debate?

CAIR’s opposition to Holy Terror, a story of comic superheroes battling Al Qaeda in New York City, goes back to when it first appeared in 2011. CAIR Executive Director Nihad Awad had condemned Holy Terror as a “shameful” example of how “Islamophobia is becoming mainstream.” That same year, journalist Spencer Ackerman wrote that “Holy Terror is a screed against Islam.”

Accordingly, CAIR-DFW Executive Director John Janney asked the Plano library about “standards, policies or code of ethics that the publicly funded library followed when faced with publications that dehumanize or marginalize minorities.” This applied, he claimed, “especially when those publications are targeted at children” (which the adult graphic novel Holy Terror is in fact not). Although paying lip service to First-Amendment free speech guarantees, CAIR-DFW’s argued that “imposing hate literature on a captive audience of children is not appropriate” for a library’s mass holdings.

CAIR-DFW also claimed that Miller had in 2018 “expressed regret for the book” — implying that Miller would support the censorship of Holy Terror. Yet he actually stated, in a Guardian interview, that he did not “want to go back and start erasing books I did.” Importantly, he described Holy Terror in a 2011 interview as a specific “screed against Al Qaeda,” not Islam. “The issue here is a method of killing. It’s not a religion,” he explained. “I can tell you squat about Islam,” but “I know a goddamn lot about Al Qaeda and I want them all to burn in Hell.”

Ironically, CAIR-DFW’s announcement appeared during the annual Banned Books Week of the American Library Association (ALA), the “oldest and largest library association in the world,” founded in 1876. During Banned Book Week, ALA promotes a “Stand for the Banned Read-Out” for people to “declare your literary freedoms by reading from a banned book or discussing censorship issues on camera.” Since the Week’s 1982 beginnings, “libraries and bookstores throughout the country have staged local read-outs, continuous readings of banned and challenged books.”

Similarly, ALA’s Library Bill of Rights “affirms that all libraries… should challenge censorship” and provide “information presenting all points of view on current and historical issues.” “Toleration is meaningless without tolerance for what some may consider detestable,” ALA elaborates, concluding that “partisan or doctrinal disapproval” should not restrict library material. Purportedly, the ALA even “opposes all attempts to restrict access to library services, materials, and facilities based on the age of library users.”

The ALA has thus throughout the years monitored “challenges to library, school and university materials” in its “Top Ten Most Challenged Books” lists. Motives for book removal have included “racism, violence… anti-ethnic… occult/satanic… sexually explicit… offensive language… unsuited to age group.” The ALA defends the right for libraries to offer even these “offensive” books.

Correspondingly, Plano libraries hold a wide variety of materials, such as Adolf Hitler’s Mein Kampf and a DVD of the 1915 American white supremacist film Birth of a Nation. Plano’s holdings also include the anti-Israel screed The Israel Lobby and U.S. Foreign Policy. And while CAIR-DFW professes concern over Miller’s influence upon children, Plano library continues to hold over 20 other Miller titles.

CAIR-DFW’s claimed censorship success raises troubling questions over what might be next on the Islamist book banning index. The seriousness of issues involving Islam in the modern world should demand more speech about Islam, not less. But CAIR and its allies have argued precisely the opposite. Journalist Spencer Ackerman in particular played a central role in the 2011 federal government purge of government training materials covering vital Islamist doctrines such as jihad, something he dismissed as irrelevant following the military debilitation of Al Qaeda.

Americans concerned about free speech should stand up to CAIR and contact the Plano library for a return of Holy Terror to the catalog, a book that many may want to examine following CAIR’s public opposition. Middle East Forum president Daniel Pipes has labeled censorship of speech about Islam as “Rushdie Rules.” Such suppression should have no place in a public library. Readers should form their own opinions about Holy Terror, Islam, and Islamism without any de facto fatwa from CAIR.

Andrew Harrod is a writer for Islamist Watch, a project of the Middle East Forum.