20 YEARS OF MUSLIM CHRISTMAS TERROR IN THE CAPITAL OF CHRISTMAS

“This cathedral is Allah’s enemy.” “This cathedral is Allah’s enemy,” the Algerian Muslim refugee narrated as he watched the cheerful shoppers outside the Strasbourg Cathedral.

“These are the enemies of Allah. They dance and are happy. You will go to hell, Allah willing.”

As the home of the European Parliament and, around this time of year, the “Capital of Christmas” with lavish displays marketing to tourists from around the world, Strasbourg was a natural target.

The massive Al Qaeda terror plot in Strasbourg targeting the cathedral, Christmas market, possibly a synagogue and European Parliament building would have brought together Muslims from Spain, Germany and the UK in a grandiose plot that might have included the use of nerve gas and bombs.

Instead the Muslim refugee terror plot was broken up. Why do non-Muslim authorities even bother to issue these condemnations? Did anyone seriously think that Pope Francis was in favor of this massacre? These condemnations are just empty posturing and virtue-signaling. Meanwhile, Pope Francis studiously avoids any mention in his statement of the motivating ideology behind the attack. He cannot, of course, take any notice of it, for he is on record saying that “Muslim terrorism does not exist,”  and has been praised by Islamic authorities for defending Islam. Has anyone, anyone at all, ever praised him for defending Christianity? 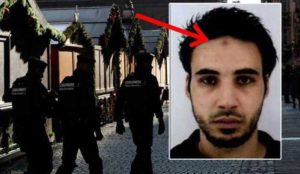 STRASBOURG – The search for Chérif Chekatt has arrived at a crucial stage. If he is not found tonight, according to experts, almost all hope disappears. French people are asked to search for a shooter in which one detail in the report is very noticeable: the dark spot on his forehead.

FRANCE AND THE MEDIA DURING THE JIHADIST WAR

The ravages of Jihad Denial.

The story behind the spot is at least as striking. Such a spot is called a zebibah in the Arabic vernacular, and literally means raisin. In reality, it is a dark, calloused prayer spot, which is seen as a ‘gift of God’ and is only for the most devout Muslims. The stain arises because Muslims pray five times a day, striking the forehead on the ground at least 34 times and making a stain or bump.

That spot seems to confirm Chekatt’s ‘exaggerated conversion behavior’, a term that quickly arose on Tuesday evening after the shooting in the heart of Strasbourg.

The 29-year-old shooter is one of the 12,000 ‘gangster jihadists’ who live in France; they are both criminals and potential terrorists.

In that respect, Chekatt is a textbook example. A long, criminal past, with an increasing tendency toward radicalization and ultimately terrorism. Born into a poor family, failed at school. Long unemployed. Convicted for abuse and burglaries. Eventually he would ‘behave differently’ in prison.
‘Excessive conversion behavior’

That is obvious to jailers. They contacted the national security services and confirmed Chekatt’s ‘exaggerated conversion behavior’ after a visit to the cells.

Yet no one really expected anything to happen. Neither did his neighbors, they didn’t contact authorities, either. “In prison, he embraced religion in a radical form, but nothing in his way of life suggested that he intended to act,” said French Secretary of State for Foreign Affairs Laurent Nuñez.

On the radar, but not on a leash

Many people have doubts about the security services; another terrorist who was known to the authorities but could still go ahead. How is that possible?

Apparently it is track to follow all the thousands of criminals who also have radical ideas. This is something else about Chekatt; he was listed on ‘Fiche S’ and was therefore monitored….