Salvini: I Want a “Trump-Style Revolution” In Italy 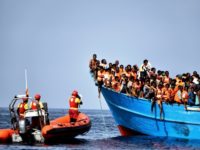 VALLETTA, Malta — Maltese authorities say they have rescued 216 Mohammedans aboard two dinghies in distress in the Mediterranean Sea near Malta.

The (Mohammedan) migrants were rescued Friday night by the Armed Forces of Malta and are being taken to Malta where they will be examined by doctors and given the chance to seek asylum.

Wildly popular with the people, Interior Minister Matteo Salvini, who has virtually eliminated human (NGO) trafficker boats dumping thousands of illegal Muslim migrant wannabes into Italy, lays the blame for it where it belongs…on the swamp dwellers (establishment elites).

Orbán: “Europe is for Europeans, and needs leaders to defend it”, “migration should be stopped, not organised”

Three French men have been sentenced to death by an Iraqi court after being found guilty of joining the Islamic State (IS) militant group.

One thought on “Victor Orban: “migration must be stopped, not organised””