Iran: Members of Parliament scream “Death to America,” call US “the real terrorist in the world”

Because the real terrorists are those who oppose the Islamic expansion programme.

While the Left is blaming Trump for escalating tensions between the U.S. and Iran, in reality, the Islamic Republic has been pushing for war with the U.S. for decades, as I demonstrate in my 2016 book The Complete Infidel’s Guide to Iran, which you can order here. 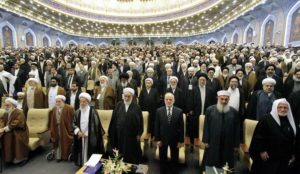 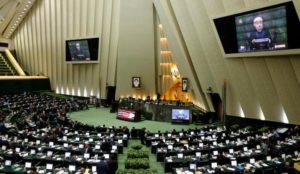 DUBAI – Iranian lawmakers chanted “Death to America” during a parliament session on Sunday after a speaker accused the United States of being the “real world terrorist,” amid escalating tension with Washington following the downing of an unmanned US drone.

“America is the real terrorist in the world by spreading chaos in countries, giving advanced weapons to terrorist groups, causing insecurity, and still it says ‘Come, let’s negotiate’,” the parliament’s deputy speaker, Masoud Pezeshkian, said at the start of a session broadcast live on state radio.
“Death to America,” chanted many lawmakers….

Explanation attempt for the above theatrics in Iran:

Muslims do not regard their war upon the world as ‘war’; ‘terrorism’ is anything at all that impedes the spread of Islam and/ or is displeasing to mohammedans.

Back in 2014, Saudi Arabia declared atheists to be ‘terrorists’ and imposed 20 years prison for anyone criticising Islam ( which is, in fact, *less* than the prescribed sharia punishment, to wit, death).

One must remember, too, the Islamic teaching that “shirk” (‘assigning partners to allah) is deemed to be a worse crime than murder.

“…world peace, the final stage of the da’wa (call to embrace Islam), is reached only with the conversion or submission of all mankind to Islam…
“Muslims believe that [Islam’s] expansion through war is not aggression but a fulfillment of the Qur’anic command to spread Islam as a way to peace.
**The resort to force to disseminate Islam is not war (harb), a word that is used only to describe the use of force by non-Muslims.** [nota bene – dda].
“Islamic wars are not hurub (the plural of harb) but rather futuhat, acts of “opening” the world to Islam and expressing Islamic jihad.
“Relations between dar al-Islam, the home of peace, and dar al-harb, the world of unbelievers, nevertheless take place in a state of war, according to the Qur’an and to the authoritative commentaries of Islamic jurists.
**Unbelievers who stand in the way, creating obstacles for the da’wa, are blamed for this state of war,** [my emphasis – dda] for the da’wa can be pursued peacefully if others submit to it.

“In other words, those who resist Islam cause wars and are responsible for them.

“Only when Muslim power is weak is “temporary truce” (hudna) allowed (Islamic jurists differ on the definition of “temporary”).”” – quoted in an article by European essayist Wolfgang Bruno, “Islamic Dictionary for Infidels” – which appeared here on Jihadwatch on 28th July 2006.

One thought on “Iran: Mullahs call US “the real terrorist in the world””