The fundamentals of Islam are dangerous, backward, and still alive.

In Australia, pollies & the journaille are obsessed with “climate emergency”.  This is a scam on which enormous amounts of money  and time are wasted, while Islam spreads all over the country and the sharia is implemented in increments.

Islam will destroy our culture & civilisation. This cannot go on. 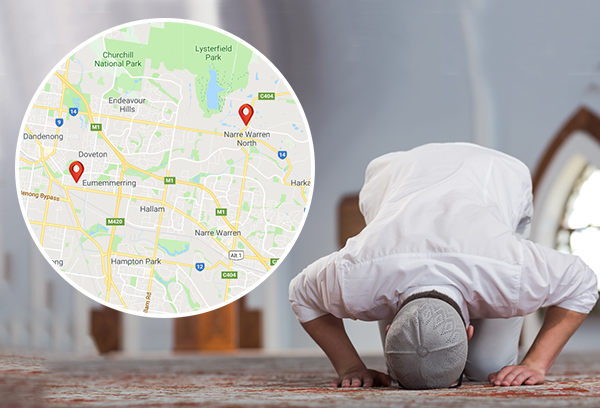 Controversial plans to build two mosques in Melbourne’s south-east have been given the green light, despite almost 800 objections to their construction.

The two mosques are set to be built in the Casey area, one in Doveton and the other in Narre Warren North, after councillors voted 7 – 3 in favour of the mosques.

The Islamic Council of Victoria has today said the objections to the projects are fuelled by “Islamophobia.”

“Islamophobia” is not a thing. People are rightfully concerned with government support for a hostile, destructive ideology that seeks to destroy us.

“I’m actually opposed to the safety issues that can come from Islamic extremism,” she told 3AW’s Neil Mitchell.

Islam is Islam. There is no “Islamic extremism”.

“I’m aware that most Muslims are peaceful, but not all of them are. So that’s what I’m concerned about.”

“Peaceful” doesn’t mean they will not participate in jihad when their numbers increase.

But the deputy mayor said residents concerns stem mainly from issues around traffic and planning, not religion.

No. The people are fearful of being called “racist-bigot-Islamophobes”.

“Only a small amount of residents said to me that they’re concerned about the Islamic religious views and how it impacts the area,” Cr Rosalie Crestani said.

The City of Casey located in Melbourne’s growing south-eastern suburbs has approved the construction of two new mosques in a 7-3 vote at a restricted council meeting last night.

Council meetings are normally open to the public, but last night due to the sensitive nature of the mosque applications only 15-20 people were admitted into the meeting. The remaining attendees had to watch a Facebook livestream of the meeting in another room.

The council had also organised a police presence at the council meeting as emotions were running high.

The Narre Warren North mosque received 773 written objections from residents in the area. These accounted for 90% of the submissions on the mosque application who lived in the City of Casey. Yet the council still approved its construction.

The voice of the objectors at council level has been Deputy Mayor Rosalie Crestani. She ran in the just passed federal election as the lead Victorian Senate candidate for the Rise Up Australia Party, a party known for its opposition to Islamic immigration to Australia and the spread of Islamism. The party recently voluntary deregistered.

Although Cr Crestani said that the increasing Islamization of the area due to more mosques was an area of concern for local residents, most of the objections referred to traffic, planning and green wedge concerns.

Because the political traitor class declared Islam a religion of peace and insists that only traffic, planning and green wedge concerns can be used to stop an undesirable  building project. But mosques are never knocked back.

The City of Casey put out a statement on their Facebook page outlining their reasons for approving the applications. They did not mention the word mosque, only refering to approving a place of worship. Commentors on the post knew that this was a mosque and there were many hostile comments, many residents vowing to remember this vote next council election.

Objectors can still appeal the approval of the mosques at the Victorian Civil and Adminstrative Tribunal.

Adel Salman from the Islamic Council of Victoria said objections to the mosque applications were ‘Islamophobic’. He added that the City of Casey had displayed Islamophobia frequently over the past few years ‘If you look at the response from the community in the past few years, a lot of the sentiments have bordered on Islamophobia.

Given it is one of Melbourne’s biggest growth areas, added to the multicultural demographics of the council area these won’t be the last mosque applications to come before council.