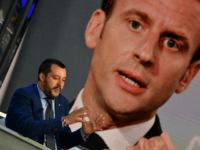 Salvini to Macron: We Are Not Your Colony!

Italian interior minister Matteo Salvini has challenged France to open up its ports, as ongoing tensions over mass migration between the two countries have once again flared.

The populist interior minister reacted to comments made by French President Emmanuel Macron who slammed Salvini for not attending a conference on migration earlier this week in Paris, Il Giornale reports.

Referring to a migration conference in Helsinki earlier this month, Salvini said: “Who are you? We’re not your employees or your waiters. We went to the official meeting in Helsinki where all of us ministers were there.”

Salvini’s firebrand rhetoric comes after Macron announced earlier in the week that 14 member states of the European Union had agreed to a Franco-German proposal to send incoming migrants to various countries in what was a labelled a “solidarity mechanism”.

The new push for a mechanism to distribute migrants comes as migrant transport NGOs have resumed activities in the Mediterranean despite the closed ports policy enacted by the Italian populist coalition.

The situation has led to Sea Watch captain Carola Rackete being arrested after she forced her way through the Italian blockade after waiting for two weeks with dozens of migrants aboard her vessel.

Other NGOs have also resumed their activities off the coast of Libya in the search and rescue (SAR) zone, including Doctors Without Borders (MSF) which announced their new mission with their new ship, the Ocean Viking, would begin later in the month.

This is not the first time Salvini and the French president have clashed, with Macron calling himself the “chief adversary” of Salvini and other populists in Europe, while Salvini has labelled the French leader a “hypocrite”.