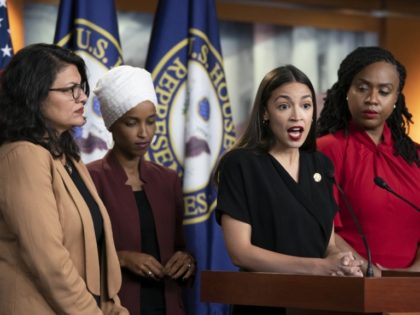 Ilhan Omar is lying, again Nowhere in Trump’s “immigration policies” is there any indicator that he “wants every black/brown person deported and Muslims banned” Just like the original horsemen, death, famine, pestilence, and war, the four horsewomen offer nothing but misery to humanity.

First up and riding high is “Stupidity”. From the Green New Deal to the “concentration camps” at the border, “stupidity” pushes the limits of ignorance.

“Profanity” opens her mouth and the foulest lies and vile words spew out like a backed-up sewer line, even her horse can’t bear her screeches of constant vilification of her opponents.

“Bigotry” raises her head and mocks America and our greatest ally Israel. She makes light of 9/11 with “somebody did something” She hates America and isn’t shy about letting everyone know.

And finally, “Insanity”, as Trump derangement syndrome has driven the Left completely insane!

If you see the Four Horsewomen of the Democrat Apocalypse riding towards you, it’s time to call them out as the anti-American, open borders, socialist zealots they are.

A man charged with joining the Islamic State (ISIS) as a sniper and firearms instructor originally came to the United States through the “Diversity Visa Lottery,” a program responsible for bringing more than half a million randomly chosen foreign nationals to the country in a single decade.

LJUBLJANA, Slovenia (AP) – Slovenia’s army says 35 troops will join police in patrolling borders in the southwest of the country after increased numbers of migrants have been spotted in the area.

One thought on “Trump derangement syndrome has driven the Left completely insane!”