Too easy, eh? Even when they lose a few headbangers, they still come out in front.

Was it Crusaders who attacked the Christchurch mosques? I hadn’t realized. Changing this logo, and certainly, the team name is not long for this world, is a sign of the acceptance of the idea that Westerners should be ashamed of the Crusades.

Why is Erdogan allowed to fund Muslim Brotherhood mosques in America?

If Erdogan is now the biggest threat to global security because of his actions in the Syrian civil war, then shouldn’t we be more concerned with his subversion activities in our own country by a factor of a million? 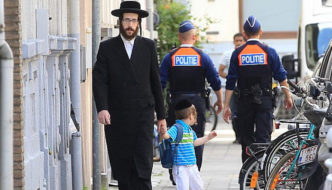 “The suspect is not considered a terrorist, a spokesman for the Brussels Prosecutor’s Office told HLN…” Then the word “terrorist” is meaningless. How has this suicidal lunacy overtaken the entire Western world?

The man was taken into custody at Brisbane Airport on Friday evening, following his extradition from New Zealand.

Chaos in Catalonia: Locking up independence leaders for 13 years – what could possibly go wrong?

‘We don’t want an empire built in Brussels’: Hungary’s FM speaks to RT about migrants & rocky relationship with the EU

The billionaire rhapsodized about the liberating potential of Facebook before an audience at Georgetown University on Thursday in a “conversation on free expression,” an event that undermined its own purpose before Zuckerberg even opened his mouth. Reporters were barred from asking questions or even filming the proceedings, while students’ inquiries were subject to a moderator. But such matter-of-fact hypocrisy set the stage for a speech that described an enticing vision for the platform’s future – one that would require a 180-degree turn on everything Facebook is doing now.

One thought on “No More Crusaders in New Zealand”