‘An indictment of South Africa’: whites-only town Orania is booming

The Guardian laments that there is still one town in South Africa that is entirely white and… shock horror: it’s booming!

Children at the public swimming pool in Orania.
.

Not enough that blacks fucked up the rest of South Africa. It’s important to fuck up this last remaining white town too.

by Dennis Webster in Orania

October in Orania can be charming. When the sun sets, long ribbons of burnt orange settle on the horizon. The flies and mosquitoes that come with the summer’s oppressive heat haven’t arrived yet. It is Magdalene Kleynhans’ favourite time of year. “You can sit outside until late into the night,” says the businesswoman, whose family spends much of their time outdoors. Her children fish from the banks of the Orange River whenever they choose. Kleynhans leaves the house unlocked. “It’s a good life. It’s a big privilege.”

More refugees must be resettled across the United States to fill a “void of cultural diversity” in towns that are made up of a majority of white Americans, a New York Times report states. But there is much more to this small Northern Cape town than the bucolic ideal painted by Kleynhans. Incredibly, 25 years after the fall of apartheid, Orania is a place for white people only.

Orania represents downright hostility to the idea of a single, united, non-racial country

Kleynhans runs one of Orania’s biggest enterprises: a call centre whose business is recruiting and retaining members for Solidariteit, a trade union primarily for Afrikaner workers, and Afriforum, a self-styled “civil rights” movement. Afriforum recently met with US President Donald Trump’s administration and Tucker Carlson of Fox News to tell them that Afrikaners are facing a widely discredited genocide. Both have made extensive investments in Orania’s construction boom.

Oranians claim the town is a cultural project, not a racial one. Only Afrikaners are allowed to live and work there to preserve Afrikaner culture, the argument goes.

The reality, however, is a disquieting and entirely white town, littered with old apartheid flags and monuments to the architects of segregation. While there are no rules preventing black people from visiting, those who live nearby fear they would be met with violence.

Whites are suffering horrific attacks in all of South Africa. Nowhere are they safe. If there is one town that allows them to be safe, why would Guardian dipsticks object to that?

The town has faced numerous calls for it to be broken up over the years, with prominent author and advocate Tembeka Ngcukaitobi arguing its existence violates South Africa’s successful dismantling of racial segregation. “Orania,” he says, “represents downright hostility to the idea of a single, united, non-racial country.”

N*66as hate the idea that there’s a white township that thrives whereas they the rest of the country is on the road to Zimbabwe.

Orania was created in 1991, a year after Nelson Mandela’s release from Robben Island, and three years before the country’s first democratic election.

Set among lush pecan nut orchards in the otherwise arid Karoo, it was set-up as an Afrikaner-only hamlet, not dissimilar from the ethnic Bantustans established under former prime minister, Hendrik Verwoerd, often dubbed the “architect of apartheid”.

By the end of the 1980s, the probability of losing control had already occurred to many Afrikaners, with some believing that impending democracy posed an existential threat to the white Afrikaans way of life. A few felt protecting that required becoming a demographic majority somewhere, rather than remaining a minority everywhere.

What “impending democracy?”
South Africa was handed over to the mob. There is not, and there never will be, anything that even remotely resembles democracy.
.

So a small group of Afrikaners – Verwoerd’s daughter and son-in-law, Carel Boshoff, among them – purchased a strip of land on the southern banks of the Orange River, and went about setting up a volkstaat, or independent homeland, where Afrikaners would decide their own affairs.

Good for them. Fuck you, Guardianistas!! 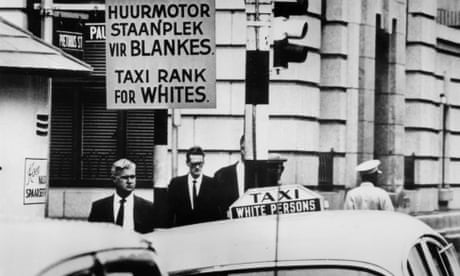 Tell us: how have South African cities changed in the 25 years after apartheid?

Orania’s founders did not settle on virgin territory, but on the remains of a half-realised 1960s project to build canals and dams along the Orange River. A community of 500 poor black and mixed-race squatters who had made their homes in the buildings left behind by the project stood between the new owners and their whites-only vision.

Speaking to the community after the purchase, Boshoff reportedly said he “did not buy a bus with passengers”. What followed, according to Cambridge historian Edward Cavanagh’s history of land rights on the Orange River, was one of the last large-scale evictions under apartheid. It was carried out by the future residents of Orania, with the assistance of beatings, pistol whippings and dogs.

Despicable leftist lies. Just don’t mention the dispossessed Whites of South Africa who live in squalid camps, cannot get jobs, are defenceless and live in fear of their lives.

The population (of whites) has doubled

And how is that a bad thing?

After three decades as a quiet backwater, Orania is booming. Its population – currently around 1,700 – has doubled over the last seven years. The most recent census estimates growth of more than 10% a year, outstripping most comparable rural towns and more, proportionally, than South Africa’s biggest cities.

Population growth means a flourishing housing market and construction industry. Neat suburban homes have been joined by new apartment blocks and walkups which sell for as much as R1.5 million (£80,000), putting them on par with comparable homes in Johannesburg. There is an industrial zone of brick and aluminium factories which sell their products around South Africa. China buys most of the pecan nuts.

They will hurt you. There is nothing we can do

The growth shows no signs of slowing. A sewage works meant to accommodate 10,000 future residents is in the pipeline. There are designs to transform the town’s humble technical training facility – where many of the skills driving the town’s new construction were taught – into a university.

Not a single brick has been laid by a black worker.

In a reverse of the usual situation in South Africa, all low-paying work in Orania – from keeping the town’s gardens to packing the shelves in its grocery stores – is performed by hard-up white Afrikaners.

It is increasing numbers of poor labourers, whose tenancy is often less secure and who either rent or rely on subsidies from Orania’s cooperative bank, who are largely behind the town’s growing population.

Tell me again how that is a bad thing?

Orania is owned by the Vluytjeskraal Aandeleblok (Vluytjeskraal Share Block) company which, together with a series of internally elected bodies, is responsible for the town’s municipal decision making.

People who want to live in Orania buy shares in the Vluytjeskraal Aandeleblok, instead of freehold. The screening of prospective shareholders allows for tight control. Buyers undergo extensive vetting, central to which is their fidelity to Afrikaans language and culture, a commitment to employing only white Afrikaners, and a string of conservative Christian undertakings. Unmarried couples, for instance, cannot live together.

The town exists at the mercy of the South African constitution. In the early 2000s, a planned remapping of boundaries that would have brought Orania under the control of a democratically elected municipality appeared to spell the end, but the town successfully appealed to the high court using the constitutional rights of the country’s minority cultural groups.

A quarter of a century after the end of apartheid, black people are restricted to using the filling station on the edge of Orania. Benjamin Khumalo* is one of them.

If there are others, why insist on using this one?

The 55-year-old and his wife, who have lived on a small nearby plot since the 1980s, were once pursued and harassed by a pickup truck covered with Orania stickers when walking home after an evening with friends. “Now you must run,” he urged his wife, pushing her through a fence. “I’ll be behind you.”

It’s like boere [white Afrikaners] Disneyland. Except you never have to go home

Khumalo still remembers when Orania was a home for black families. The guns carried on the hips of many Oranians, however, have been enough to convince him never to enter the town again. “They will hurt you,” he says. “There is nothing we can do.”

Unsurprisingly, Orania’s white residents have a different take. The town’s doctor, Philip Nothnagel, describes South African cities as “warzones”. He lived in the country’s administrative capital, Pretoria, before he moved to Orania. The 10 months since have been the best of his life, he says.

“It’s the first time in history that a country has been established without a war,” he adds, sporting a Lincolnesque beard after he dressed up as Paul Kruger during recent celebrations of the Boer hero. “It’s like boere [white Afrikaners] Disneyland. Except you never have to go home.”

The spectre of Verwoerd, the architect of apartheid, is difficult to escape. His portrait and bust seem to be around every corner. His wife, Betsie, is buried in the town, and her old home has been converted into a Verwoerd museum.

His grandson Carel Boshoff junior is a former leader of the Orania Movement, which first proposed the idea of Orania in the 1980s. Boshoff junior is perhaps one of the more unlikely fans of the pianist Abdullah Ibrahim, whose music plays on a laptop in his office.

Like his parents and grandparents, Boshoff fears white Afrikaners face a real threat of “being wiped out”, either through violence or what he calls “amalgamation”. He believes the recent expansion of Orania is just the start.

“We are something like the phoenix in the ashes,” he says. “The questions to which Orania is the answer are so fundamental to the structure of South African society that you can’t express and affirm your Afrikaner identity without coming to the conclusion of a bigger Orania.”

Orania has continued largely uncontested since its victorious appeal to the high court in the early 2000s. The ANC government does not appear to be considering an appeal of the high court decision. Zamani Saul, head of the ANC-run Northern Cape government, has said an inquiry into Orania’s legal status is yet to be concluded.

For Ngcukaitobi, the author, Orania “represents the reversal of the constitutional project of national building.” The rights that underpinned the town’s high court challenge against the remapping are not unlimited, he says. Anyone who cares about South Africa “would rightly be offended by what Orania represents, which is an enduring legacy of racial mobilisation”.

Why are South African cities still so segregated 25 years after apartheid?

Orapeleng Moraladi, Northern Cape secretary of the Congress of South African Trade Unions, blames the town’s continued existence on the courts, an uncooperative Orania leadership, and a lack of political will from the ANC. “[The town] is like embracing an apartheid system within a democratic state,” he says. “Orania is an indictment of the government of South Africa.”

Leftist blockheads & black supremacists will not rest until Orania is destroyed.

*Indicated names have been changed