The Gates of Vienna takes a closer look at Merkel’s sinister speech by which she seeks to justify the German Gestapo:

“PLEASE, Chancellor Merkel! PLEASE censor my speech so I can truly be free!!!!”
.

In a recent speech in the Bundestag, German Chancellor Angela Merkel spoke out in favor of freedom of expression, but said that there must be limits to it, such as when it might “injure the dignity of others”.

I’m an American living in the USA, so the idea that free speech could be curtailed if someone’s dignity is offended seems nonsensical. However, Europe is a different sort of place, with different rules. Most Western European countries have hedged in freedom of speech with a lot of exceptions and restrictions.

Can you imagine the process by which the State would determine whether any particular instance of speech might be injurious to someone’s dignity? The legislature would have to order the formation of a Dignity Assessment Board, with members chosen by the head of government according to rules that guarantee the preservation of “diversity” in the body. The board would be granted a large budget so that it could examine each instance of possibly offensive speech at whatever length the circumstances required.

I’m certain that anyone who said “Islam is inherently violent” would be judged to have injured the dignity of others. However, if someone said “Jews are the descendants of apes and pigs,” he would probably be let off the hook…

END_OF_DOCUMENT_TOKEN_TO_BE_REPLACED

Chancellor Angela Merkel railed against free speech in the German parliament, declaring that freedom of expression which offends “the dignity of other people” must be censored to secure a truly free society.

“We have freedom of expression,” the migrant crisis architect began dubiously, in a speechto the German federal parliament, or Bundestag, uploaded to social media by state broadcaster Deutsche Welle (DW).

“For all those who claim that they can no longer express their opinion, I say this to them: If you express a pronounced opinion, you must live with the fact that you will be contradicted. Expressing an opinion does not come at zero cost!” she warned ominously, to applause from the assembled politicians.

“But freedom of expression has its limits. Those limits begin where hatred is spread. They begin where the dignity of other people is violated!” she continued, gesticulating wildly.

“This house will and must oppose extreme speech. Otherwise our society will no longer be the free society that it was,” she concluded, somewhat contradictorily.

“Hate speech” is defined by those with the power to legislate against it.

The state must never be trusted to set the limits of acceptable speech.

It is very sinister to see such authoritarian ideas endorsed in the name of “freedom”. 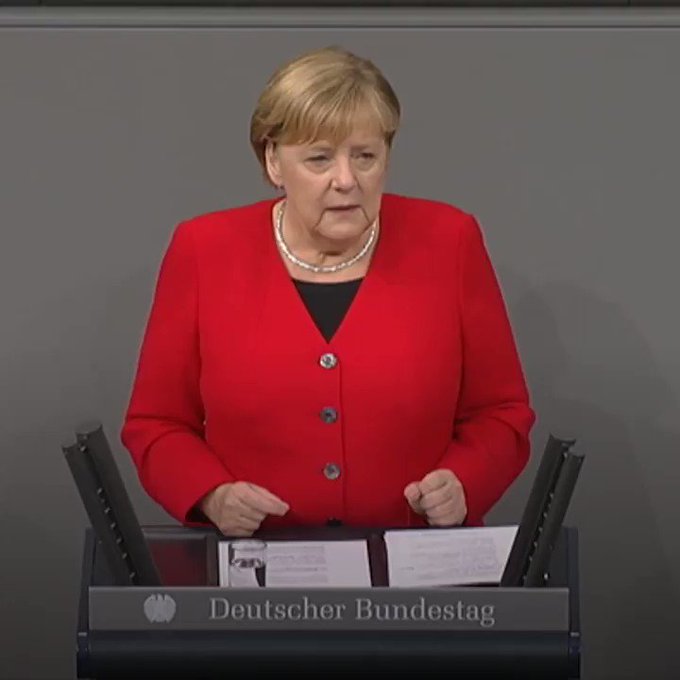 Andrew Doyle, the comedian and free speech advocate behind the popular Titania McGrath parody account which lampoons left-liberal social justice warriors, was disturbed by Mrs Merkel’s speech, observing that “hate speech” is always “defined by those with the power to legislate against it.”
.

“The state must never be trusted to set the limits of acceptable speech,” he warned, adding that it was “very sinister to see such authoritarian ideas endorsed in the name of ‘freedom’.”

Indeed, quite how meaningful “free” speech rights which only cover speech the state does not deem “extreme” or offensive to the “dignity of others” can really be is unclear — but the Orwellian notion that the truly “free” society is one where free speech is curtailed is not unique to Germany.

The British government under Theresa May previously rejected a petition for a Free Speech Act and an end to so-called “hate speech” prohibitions with a nonsensical claim that “UK legislation values free speech and enables people who wish to engage in debate to do so… [but] hate speech [is] not acceptable in our society, and anyone seeking to use freedom of speech as an excuse to break the law should still face the full force of the law.”

The EU Court of Justice ruled EU governments can order Facebook to remove content worldwide after an Austrian politician was insulted online.