In one of the most consequential decisions of the Trump presidency, the airstrike killing Iran’s Major General Qassem Soleimani in Baghdad on Friday chops the head from a very dangerous snake who has targeted Western interests for almost 20 years. But it does not mean a new war in the Middle East, no matter how much the US establishment might want one.

There has already been one predictable response: the world’s frenzied left all of a sudden reveres Soleimani as the late leader of its resistance. In other words, the Trump ­resistance.

The more important response will be Iran’s next move. It’s global terrorist network is well placed to exact revenge on the West, including Australia. 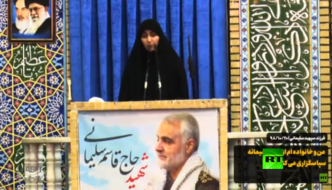 Soleimani, the Iran Revolutionary Guard-Quds Force commander, was directly responsible for the deaths of hundreds of US soldiers and thousands of civilians across Iraq, Syria, Lebanon, Yemen and Afghanistan.

He fashioned himself after Hassan-i-Sabbah, who led the ­Assassins, or ashashiyan, from the Alamut Mountains in Iran and Syria. The Assassins were an 11th-century Persian Ismaili cult specialising in asymmetric warfare, assassinations, psychological warfare and terrorism.

Under Soleimani, Iran has some of the world’s best-armed and trained terrorists and militia. They are even active in South America.

The immediate reaction of the Trump haters was as predictable as it was extraordinary — their narcissistic obsession guiding their every reaction.

But they ignore what has been happening on the ground: thousands of Arab civilians dead at the hands of Iran’s militias; the medieval theocratic oppression of millions of Iranians; and Iran’s ­obsession about wiping Israel off the map.

These same people refused to label Islamic State violent Islamist extremists. They would prefer to surrender their fate to a master of terror.

Trump’s decision to eliminate Soleimani challenges those who preferred to believe that the US was reducing its capability to take decisive military action in the region. The intelligence required to find and finish Soleimani ­reveals the extent of the US apparatus and support in the region.

And this strike is proportional. Last June, after Iran shot down a US drone, Pentagon brass had jets fired up ready to launch airstrikes against it. It was Trump who asked how many people would be killed.

The President totally rejected the cost in Iranian lives in retaliation for losing a piece of military hardware.

The hawks accused Trump of being weak and indecisive. But he has been right not to drag his country into more wars.

His calculation has been about minimum deployment for maximum effect and for allies to pull their weight. Many didn’t like being shamed into accepting they were derelict in their duty to collective security obligations.

Still the EU members of NATO, America’s primary Western ally, continue to dither against the threats posed by Russia, China and Iran.

As Winston Churchill explained in Memoirs of the Second World War, the malice of the wicked is reinforced by the weakness of the virtuous. A lesson that remains unlearned in Europe. ­Instead the West should stand firm with the US.

Despite their fist-pumping rhetoric, Iran’s mullahs will not ­directly engage the US military.

They wish to maintain a constant state of unease through continual attacks by proxy forces.

As if plucked from pages of ­Ancient Greek Pericles’s war policy, the aim of Iran, and indeed the Taliban in Afghanistan, has been to gradually drain our endurance in order to convince us we will never succeed. They need not win.

The strike on Soleimani is significant because Iran, Russia and China are midway through military manoeuvres in the Gulf. China and Russia would be the ­direct beneficiaries of a major war with Iran.

Eliminating Soleimani averts this for the time being.

Nonetheless, the Iranians will be unpredictably vicious and ­revengeful. And they will see Australian civilians and soldiers as ­targets.

We have about 2000 personnel deployed across the Middle East, including those training the Iraqi military, as well as assets in the Gulf as part of a joint maritime security effort with the US and Britain.

The Morrison government is holding a national security committee meeting to focus on the bushfires. It must now also have on its agenda contingencies and scenario planning for a potential hit on our foreign and domestic interests.

Soleimani-backed Shia terrorists have form when it comes to targeted assassinations.

Assassinating dissidents in ­Europe is just the start.

In 2011 the FBI revealed a Quds Force plot in which a Mexican drug cartel was paid $US1.5m to assassinate the Saudi ambassador in Washington.

In 2018 Danish police shut down large parts of Copenhagen in a manhunt for two bomb-­plotters.

Last June French security services determined that Tehran was behind the plot to bomb a rally of the People’s Mujahedeen of Iran opposition group in Paris.

In 2015 British police investigators found three tonnes of the key bomb ingredient ammonium ­nitrate Hezbollah had stashed in London at the time of the signing of the controversial nuclear deal with Iran, to which Britain was a signatory.

For the long term, the challenge for Western governments is how we defend our foreign and domestic interests from these growing networks of state and non-state terrorists. A silent risk is the growing number of people in the West who admire the likes of Soleimani.

As the British geopolitical theorist Halford Mackinder stated: “Democracy refuses to think strategically unless and until compelled to do so for purposes of defence.”

Today that is too slow. We need to wake up to the game being played against our system.

Not just by Iran but Russia and China.

Jason Thomas teaches risk management at Swinburne University of Technology and is director of Frontier Assessments.

2 thoughts on “Soleimani: For once the virtuous have not been meek”