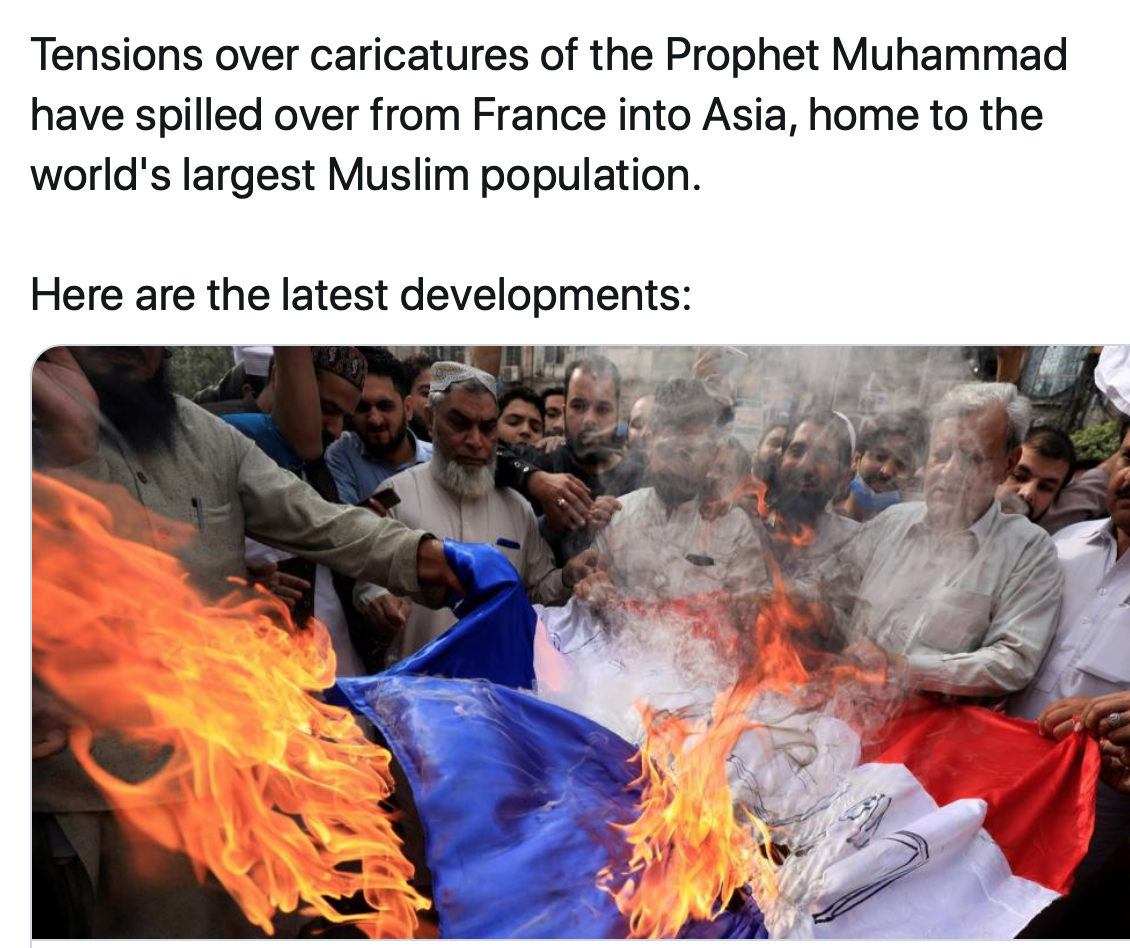 Tensions in France over caricatures of the Prophet Muhammad — between offended Muslims and President Emmanuel Macron’s government defending freedom of expression — have spilled over into Asia, which also is home to a large Muslim population.

Here are the latest developments:

3:00 a.m. “This Tweet violated the Twitter Rules.” A short notice from the U.S. social media giant announces the removal of a tweet by former Malaysian Prime Minister Mahathir Mohamad, who had earlier written that “Muslims have a right to be angry and to kill millions of French people for the massacres of the past.”

Under Twitter’s policy, “When we determine that a Tweet violated the Twitter Rules, we require the violator to remove it before they can Tweet again. We send an email notification to the violator identifying the Tweet(s) in violation and which policies have been violated.”

11:00 p.m. French President Emmanuel Macron says: “Once again our country has been hit by an attack, an Islamic terrorist attack,” as he visits the scene of the church killings in Nice. “All of us would like to support the Catholics in France and elsewhere,” Macron says. “Once again it’s the Catholics that are being attacked,” he says.

10:45 p.m. A Saudi man is arrested in the Red Sea city of Jeddah after attacking and wounding a security guard with a “sharp tool” at the French Consulate, local police say. A statement from the Mecca region’s police says that the guard suffered “minor injuries” and that “legal action” is being taken against the perpetrator.

The French Embassy says that the consulate has been subject to an “attack by knife which targeted a guard,” that the guard has been hospitalized and that his life is not in danger. “The French Embassy strongly condemns this attack against a diplomatic outpost which nothing could justify,” it says.

10:34 p.m. Saudi Arabia “strongly condemns” the attack in Nice, its foreign ministry says. “The kingdom categorically rejects such extremist acts, which contravene all religions … while stressing the importance of avoiding all practices which generate hatred, violence and extremism,” says the statement published by the state news agency SPA.

8:54 p.m. France raises the security alert for French territory to the highest level after the knife attack in the city of Nice. Prime Minister Jean Castex announces that the government’s response to the attack will be firm and implacable.

6:00 p.m. U.S. Secretary of State Mike Pompeo urges Indonesiansto focus on the treatment of Muslim Uighurs in China, describing it as the “gravest threat” to the future of religious freedom in a speech to an Islamic group. “I know that the Chinese Communist Party has tried to convince Indonesians to look away, to look away from the torments your fellow Muslims are suffering,” he says. “I know that these same CCP officials have spun fantastic tales of happy Uighurs eager to discard their ethnic, religious and cultural identities to become more ‘modern’ and enjoy the benefits of CCP-led development. When you hear these arguments, I’d just ask you to do this: search your hearts. Look at the facts. Listen to the tales of the survivors and of their families.”

“My holy book teaches me that faith without works is dead,” Pompeo says.

“I’m sure you know the ways that the Islamic tradition — and the Indonesian tradition — demand that we speak out and work for justice,” he says. Police stand near the church where a knife attack took place in Nice, France, on Oct. 29.   © Reuters

5:00 p.m. A knife-wielding attacker shouting “Allahu Akbar!” — meaning “God is the greatest!” — beheads a woman and kills two other people at a church in the French city of Nice. The assailant is believed to be a 21-year-old Tunisian national who had recently entered the country from Italy.

3:12 a.m. Turkish President Recep Tayyip Erdogan says Western countries mocking Islam want to “relaunch the Crusades,” heightening a confrontation with France over cartoons of the Prophet Muhammad that have stirred anger in Muslim-majority countries. In a speech to lawmakers of his AK Party in the parliament, Erdogan calls standing against attacks on the prophet “an issue of honor for us,” suggesting that Ankara may be digging in for a prolonged standoff.

11:05 p.m. Malaysia “strongly condemns any inflammatory rhetoric and provocative acts that seek to defame the religion of Islam as the world has recently witnessed in the forms of populist speeches and publication of blasphemous caricatures depicting the Holy Prophet Muhammad,” its foreign ministry says as the French envoy is summoned to the ministry.

6:26 p.m. Egyptian President Abdel-Fattah al-Sisi says freedom of expression should stop at offending more than 1.5 billion people, following the display of images in France of the Prophet Muhammad that Muslims see as blasphemous. Sisi also says he firmly rejects any form of violence or terrorism from anyone in the name of defending religion, religious symbols or icons.

9:51 p.m. Thousands of Muslims take to the streets of the Bangladeshi capital of Dhaka to protest against remarks by French President Emmanuel Macron in a row about cartoons of the Prophet Muhammad. Protesters in Dhaka unfurl placards with caricatures of Macron and shout slogans, demanding an unconditional apology and the ouster of the French ambassador.

“Muslims will not let this go in vain,” says Atiqur Rahman, a spokesman for the right-wing Islami Andolan Bangladesh.

“He [Macron] needs mental treatment,” says the spokesman, who calls for a boycott of French products. “He has not only made himself the enemy of Islam, but of all peace-loving people too.”

3:06 a.m. Pakistan’s parliament passes a resolution urging the government to recall its envoy from Paris over the republication of images of the Prophet Muhammad in France, accusing President Emmanuel Macron of “hatemongering” against Muslims. The nonbinding National Assembly resolution comes hours after the French ambassador in Islamabad is summoned to the foreign office for Pakistan to register its protest. Pakistani Prime Minister Imran Khan also takes aim at Macron, saying he has attacked Islam by encouraging the display of cartoons depicting the prophet. The coffin of slain teacher Samuel Paty is carried in the Sorbonne University courtyard during a national memorial event in Paris on Oct. 21.   © Reuters

9:49 p.m. As the French government’s crackdown on Muslim organizations gains momentum, the Collective Against Islamophobia in France tweets that “we no longer feel safe” in the country and that the organization is going international.

At a national memorial for murdered schoolteacher Samuel Paty, French President Emmanuel Macron says Paty “was the victim of a conspiracy of stupidity, hate, lies … hate of the other … hate of what we profoundly are.”

U.S. national security adviser Robert O’Brien says that China is perpetrating “something close to” a genocide with its treatment of Muslims in its Xinjiang region.

“If not a genocide, something close to it [is] going on in Xinjiang,” he tells an online event hosted by the Aspen Institute. The United Nations estimates that more than a million Muslims have been detained in Xinjiang.

O’Brien says U.S. Customs had seized “massive numbers” of hair products made with human hair from Xinjiang. “The Chinese are literally shaving the heads of Uighur women and making hair products and sending them to the United States,” he says.

Schoolteacher Samuel Paty is beheaded in a Paris suburb. Paty had shown his pupils cartoons of the Prophet Muhammad in a class on freedom of expression, angering some Muslim parents. Muslims believe that any depiction of the prophet is blasphemous. Police shot dead the 18-year-old attacker of Chechen origin. French President Emmanuel Macron gives a speech titled “Fight Against Separatism” in which he says that “Islam is a religion that is currently experiencing a crisis all over the world.”

Noting a need to free “Islam in France from foreign influences,” Macron announces that he will end a program to train imams sent from Turkey, Morocco and Algeria.