BoJo is a flake & a total sellout.

More bait and switch from BoJo. Johnson has also just committed to the UN Migration Pact, recognizing mass migration as a “human right,” as he continues to sell out the UK to jihadi subjugation. “Boris Johnson accused of retreat on terrorism as £400m cut from fight against ISIS,” by Chris McLaughlin, Mirror, 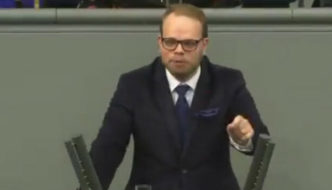 Germany: Leftist politician says ‘If we tell Muslims how they should behave, we will humiliate them and reap hatred’

That’s the spirit. Dhimmitude on steroids. Degenerates like this have no place in politics anywhere. People like that are beneath contempt. 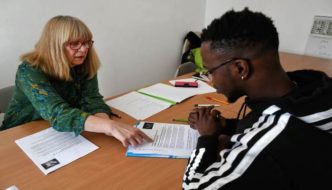 Yet the French government is staking the future of the nation on these migrants becoming loyal citizens of France, fully accepting French values. But this incident suggests that France’s future is much more likely to be marked by civil strife than by intercultural harmony.-Robert Spencer

“Integration in France is not a matter of signing a paper,” translated from “الاندماج في فرنسا.. ليس توقيعاً على ورقة” by Walid Berksieh, AlModonOnline, November 23, 2020:

Last August, I signed a contract of residency and integration in the French Republic, as a necessary step in my refugee journey in France, after a waiting period that was prolonged by the coronavirus pandemic. Although I consider myself automatically integrated into the French value system, I did not complain about attending the mandatory four-day integration course, like most people I met in the distant days when we received general information about the history of France and the relationship of its individuals with the various state institutions.

And since I do not speak French yet, I asked for an English-language translator, since I was certain in advance that the translation into Arabic would be disastrous, which I confirmed after I had to stay at the Arab table with refugees of different Arab nationalities, in addition to a Moroccan-French translator, who was eager to present her side notes and explanations of everything the lecturer, who just happened to be my tutor in French the rest of the week, talked about.

Perhaps this side chatter that the translator brought to us, despite my objection to much of it, was the worst aspect of the four days, while the information, for example, was about the history of human rights in France and how the French state developed from the dark ages in which those rights did not exist in the first place towards adopting them in their present form. The translator talked about the lie of human rights and democracy, and how France was responsible for spreading slavery and human trafficking centuries ago, and how it has practiced that until today by claiming to help refugees, even though it is the reason for their displacement and need for asylum, because of its politics and wars in the countries of the Middle East!

Of course, the translator did not present her words, which were akin to a news bulletin on Syrian television, as official instruction, but rather presented them as a friendly side talk only, and perhaps the worst thing is that the rest of those present were on her side. The conclusion they reached at the end of one of their conversations about France’s colonial history was that Arab refugees should exploit their presence in France now, in order to rob the French, as a justified response to the French state’s theft of the wealth and wealth of Arab peoples for hundreds of years. Of course, the translator did not neglect to talk about she personally benefited from the free services provided to her by the French state, from the low-cost home to the free education that her children receive in schools and universities.

I was perhaps visibly upset by the end of the third day of the course, to the point that the lecturer asked me at the end of the day whether or not I was satisfied with the integration course. And he was shocked when I told him that this session was useless, and his shock increased with the details I gave him about what was taking place the entire time among the people present, starting with the mockery of him and his speech, through the mockery of human values ​​such as support for gay rights or equality between men and women and the separation of religion from the state, leading to the fact that those who are supposed to be integrated into French society are the ones who are urging new refugees not to integrate, especially when it comes to religious tendencies, family values ​​and cultural characteristics, which can be kept and practiced secretly out of sight in case they contradict French laws, according to the translator’s opinion.

Of course, this advice given by a Muslim woman to the refugees whom she believes to be all Muslims is considered disastrous, in a country that has recently suffered from a deep crisis due to the separatist tendency that Muslim societies are accused of possessing in an attempt to establish states within the French state itself, according to the official French discourse. The matter becomes more dangerous when looking at the violent dimension that this isolationist thinking may reach, such as the recent terrorist operations in France, specifically the murder of the French professor Samuel Paty in Paris last October….