The U.N. reports the “mysterious group” of insurgents has committed “killing, rape and other atrocities.” The U.S. Army Special Forces soldiers were sent to train Mozambican marines for two months to counter the spread of violence by the Islamic extremist group, al-Shabab.

Will the Green Berets be instructed to behead jihadis? I doubt it.

The announcement comes as the Mozambique government confirmed another jihad massacre, in which dozens were reported dead. Witnesses described beheaded bodies in the streets.

Although the UN states that a “mysterious group” of insurgents has committed “killing, rape and other atrocities,” the responsible party is the Islamic State (ISIS), which is trying to expand the hegemony of Sharia and create a caliphate in the region.

On the surface, this appears to be a noble deed by the Biden administration to train local troops in Mozambique, but without an understanding of the jihad and local government corruption, the move could easily backfire.

The Mozambique military is disorganized and corrupt. Its smuggling networks are wide-ranging and complex, involving police and the military. Money talks above all else in Mozambique, which is a “major centre for ivory, timber, heroin and ruby smuggling.” Amid all this, jihadis are nurtured. The Biden Administration is clueless about the global jihad, unable even to recognize the dangers inside the United States itself from jihadist in infiltration via its Southern border. 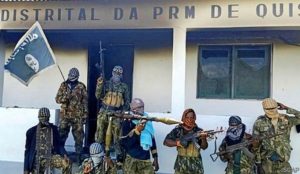 The United States has deployed U.S. Army Green Berets to Mozambique to train local troops as the country faces a growing insurgency that has seen children as young as 12 beheaded as well as thousands killed and displaced in the southern African country.

Analysts say this intervention is long overdue with a worsening humanitarian crisis and rise in “appalling atrocities.” More than 2,600 people have died since 2017 from the fighting and terrorist activity that began in north Mozambique, according to the United Nations.

The U.N. reports the “mysterious group” of insurgents has committed “killing, rape and other atrocities.”

The U.S. Army Special Forces soldiers were sent to train Mozambican marines for two months to counter the spread of violence by the Islamic extremist group, al-Shabab.

“The United States is committed to supporting Mozambique with a multifaceted and holistic approach to counter and prevent the spread of terrorism and violent extremism,” the U.S. Embassy in Mozambique said in a statement. “Civilian protection, human rights, and community engagement are central to U.S. cooperation and are foundational to effectively counter the Islamic State in Mozambique.”

“This approach addresses socioeconomic development issues as well as the security situation,” the statement adds.

The elite Green Berets are often deployed worldwide to build relationships, go on missions with locals and teach them how to fight effectively, Business Insider reports.

The U.S. government launched the two-month Joint Combined Exchange Training program to help prevent the spread of terrorism and will also provide communications and medical treatment.

Islamic State affiliates in Mozambique are also known as Ansar al-Sunna and known locally as al-Shabaab. The group reportedly pledged allegiance to the Islamic State of Iraq and Syria in 2018. …

One thought on “U.S. Green Berets to fight “mysterious group of insurgents” in Mozambique”