Leftism, it’s a powerful drug that transcends all other allegiances and makes even suicide seem appealing. 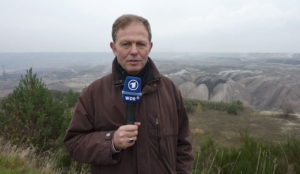 Lorenz Salomon Beckhardt is a Jew himself. He did not find out about this until he was a young adult, as his parents, as Shoah survivors, wanted him to grow up carefree (?). Today Beckhardt is a WDR employee and, among other things, editor of the science magazine “Quarks.” Above all, however, he is a brave fighter against the right.

This irrepressible will to fight against everyone who is to the right of WDR, Annalena Baerbock and Lusia Neubauer was probably also his motivation for posting this tweet yesterday, which was deleted a few hours later by Twitter for violating community standards: 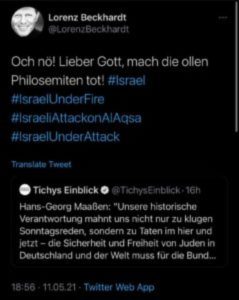 Anti-Semitic hate speech in the fight against anti-Semitism?

Because in the fight against the right-wing or even just against supposed Nazis, even as a child of survivors of the Shoah, one can indulge in a wording that anti-Semites like to use contemptuously. The term philosemitism was often used in standard works of the forerunners of National Socialism to disparage friends of the Jewish people, their religion and culture. “Friend of the Jews” was seen as a swear word that could hardly be made more offensive.

That makes Beckhardt’s usage all the worse. Obviously, the German left is now using every means to fight the enemies of their pseudo-open society. And from Beckhardt’s point of view, Hans-Georg Maaßen is undoubtedly one of them.

Will this tweet have any consequences for Beckhardt? Certainly, but probably not below the Grimme Prize or the Federal Cross of Merit!