“Climate Change” is a game for the rich. Prince Charles calls it, “a road map to a sustainable future.”

His price point is saving the planet from destruction. His method of sale reflects the approach of grifters and thieves, scaring people for profit. 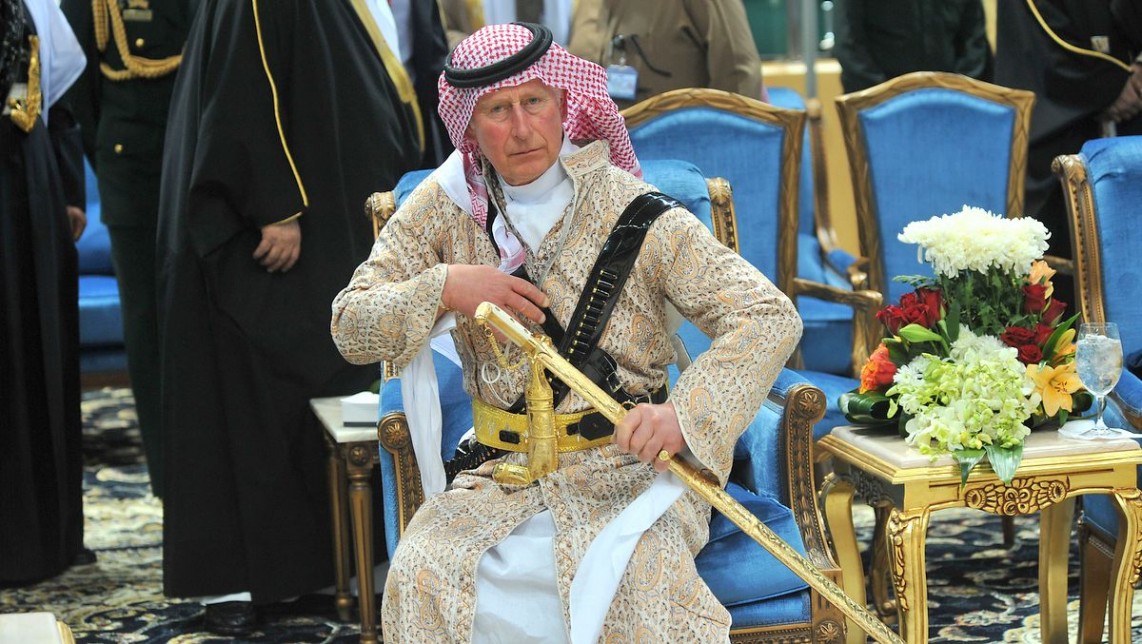 “There are trillions of dollars in sovereign wealth funds, pension funds, insurance and asset portfolios looking for investible projects that are genuinely sustainable…”

Prince Charles has used a keynote address to make an impassioned plea for Australian super funds to back his green finance initiative.

In a pre-recorded video for an Australian Institute of Superannuation Trustees conference in Adelaide on Tuesday, the Prince of Wales said climate risk was one the biggest issues facing responsible investors.

“I am, therefore, enormously encouraged to hear of the ambition of several Australian superannuation funds to achieve net-zero carbon emissions in their investment portfolios,” he said in the near 1000-word speech.

“They will be doing so in the best financial interests of their members, given the risks that global warming and climate change present to each fund’s long-term investment performance.”

In January, the heir apparent to the British throne launched his Terra Carta initiative, a charter aiming to put nature, people, and the planet at the heart of the financial sector.

Sky News’ news screen ribbon said Barnaby Joyce is publicly asking for the coalition to have a rethink on climate.

How sweet it is.
Our tactic since July 2019 has been to continue to use data & facts to expose the anti-human climate scam. In the last year my tactic has been to personally expose Barnaby Joyce & Matt Canavan for their dishonesty and hypocrisy on coal & climate. I’ve done this in person with Senator Canavan, publicly with both using the senate, media & social media, and in conversations with LNP senators and MP’s.
.
Senator Canavan seems to be feeling awkward and vulnerable.
.
It’s clear that we’re getting somewhere. Joel is desperately scared of losing his job in the federal electorate of Hunter, and more so now after the weekend NSW state by-election in Upper Hunter.
.
Labor is tearing itself apart on climate and coal. LNP could soon be doing the same.
Even though the Nats have backed every one of the Liberals’ anti-coal policies over the last four years, the Nats were hypocritically campaigning in Upper Hunter as being pro-coal.
.
And, in the Upper Hunter pro-coal and pro-farming electorate, their vote went down. Clearly the Nationals have a credibility problem.
.
Perhaps, Matt, people need actions more than hollow words.
Look at the facts. We got Adani moving. It was one of the first things that Pauline and I did as senators in 2016. LNP and Labor were scared to do anything. We got Adani to make presentations to us and then after holding Adani accountable on water, farming, environment, land use, etc we jumped on board to give them our support.
.
We were the first to expose Labor’s coal hypocrisy under Bill Shorten.
Alone we are exposing & turning back the UN’s anti-Australian climate scam.
This is our issue. This is the people’s issue. We will keep exposing the Nats and Lib-Lab.
.
Anyone who has the facts and data as we have, eventually wins.
Stay tuned. Much more to come in the next few months.
One Nation alone is the party for energy security.
One Nation alone is the party for energy affordability.
One Nation alone is the party for coal, manufacturing & national security.
One Nation alone is the party for restoring Australia’s national sovereignty.
One Nation alone is the party for our nation.
***

While they risk your portfolio, with the blessing of the Government, and Unions, there’s minimal risk to their own. All this suggests that “Climate Change” is a game for the rich.

Prince Charles’ recent calls for Australian superannuation organisations to pay for initiatives based on the anthropogenic ‘apocalyptic climate change’ delusion, prove that the rich play hard with our hard-earned money, and consider themselves entitled to it.

In a pre-recorded speech for the Australian Institute of Superannuation Trustees conference in Adelaide, Prince Charles talked up the urgency of investing in a ‘zero net carbon’ future.

“[Super Funds] will be doing so in the best financial interests of their members, given the risks that global warming and climate change present to each fund’s long-term investment performance.”

The speech was a “Climate Change” sales pitch, with the Prince uptalking the features and benefits of his ‘Terra Carta’ project.

A project described by 7News as “a charter aiming to put nature, people, and the planet at the heart of the financial sector.”

One of the goals of the ‘Terra Carta’ project, according to The Australian, was to merge material wealth with sustainability, with Charles stating that we want to show how “investing in sustainability and building prosperity are not mutually exclusive.”

A key filament to the ‘Terra Carta’ is establishing its ‘Natural Capital Investment Alliance’, an alliance filled with well-funded members/investors committed to “ensuring that investment and financial flows are consistent with a low carbon nature-positive future.”

Each one, said the SMH, have either directly or indirectly voiced the goal of achieving net-zero emissions. Some have committed to “invest only in net zero emissions companies and rolled out beefed-up climate plans.”

Charles, ever the apocalyptic environmentalist, enticed conference delegates with trope dire predictions, and flowery prospects of endless gold at the end of the zero-carbon rainbow,

“There are trillions of dollars in sovereign wealth funds, pension funds, insurance and asset portfolios looking for investible projects that are genuinely sustainable, with good long-term value and strong rates of return.”

Charles’ “Climate Change” sales pitch sits right up there with former Prime Ministers, and avid “Climate Change” cult enthusiasts, Kevin Rudd, and Paul Keating, demanding the LNP government do more to “fight” climate change and increase in the % forced by the Government out of Australian worker’s hands into Super Funds, from 9.5% to 12%.

Australian Super Funds, in line with ASFA’s statistics, hold a total of $3.0 trillion in worker and retiree funds.

It’s too coincidental to dismiss a possible link between fearmongering about climate change, demands for a forced increase in super contributions, and the legal gamble being proposed that messes with $3 trillion in Australian’s Super Fund portfolios.

So, there are $3 trillion reasons for questioning the super-rich using Super Funds as ATMs, from which they can play esoteric, “Climate Change” saviour – spouting from their private jets, yachts, and carbon footprint mansions, “it’s all for our own good.”

While they risk your portfolio, with the blessing of the Government, and Unions, there’s minimal risk to their own.

All this suggests that “Climate Change” is a game for the rich.

It allows self-righteous, catastrophising Climate Change crusaders to prance around, gambling money on a theory, based on dubious computer modelling, that fails to address natural climate change, and solar activity, while its adherents lose sight of the dynamic role of the five climates because of an obsession with the Polar climate.

Creation care infers that good environmental policy should be a consideration for investments, but caveat emptor trumps the “Climate Change” self-righteous cause.

As Geologist Ian Plimer has painstakingly asserted, “CO2 is plant food, not pollution.”

Being told to divest financial interests away from responsible investments which provide reliable returns towards a CO2 free world, is selling a treeless existence.

Likewise, those selling carbon as an oppressor are telling us to hate our existence.

Carbon is the base element of organic life. A carbon emissions-free future is telling people to invest in nothing, or it’s a smokescreen for the malevolent depopulation through extermination.

The latter isn’t unrealistic when the view of radical environmentalists is that humans are a virus infecting the planet.

Footnote that this is without me unpacking critical considerations concerning wealthy people painting capitalism, carbon, and CO2 as a great Satan in need being destroyed.

What’s wrong with Charles’ sales pitch isn’t so much the contempt it exposes, but the questions it raises.

Does the super-rich see superannuation as easy money? A slush fund they can access through organisations, who can be easily manipulated into happily throwing your money into their pet “social justice” projects?

Take for instance, how some wealthy Unions skim off the top, using super funds to finance projects that are political by nature.

Funds are used to fight for the political survival of the Union, help elect Labor Party candidates, or advance an ideological agenda, at a cost to the worker. Sometimes without their knowledge. Often without their informed consent.

While these organisations play with those funds, ordinary Australians aren’t allowed access to their own money unless they’re aged 65 or meet a needs-based criterion.

Even access for the eligible retiree comes with conditions of use.

Prince Charles, Kevin Rudd, and Paul Keating, who live off investments, taxpayer-funded allowances (pensions), and expense accounts, for parliamentary and civil service, serve to benefit from an increase in superannuation funds from taxpayers.

An increase allows Climate Change activists a deeper well to draw funding, under the guise of investing in, as Prince Charles called it, “a road map to a sustainable future.”

By joining him in his “Climate Change” initiative, Super Funds will be taking on “an opportunity to advance their leadership on climate.”

His price point is saving the planet from destruction. His method of sale reflects the approach of grifters and thieves, scaring people for profit.