Kudos to Andrew Bolt for standing his ground in the face of this nauseating bullshit called “stolen generation”. Grown men cried in parliament over imagined wrongdoing; just like they danced & kissed each other like lunatics when they screwed conservative Australia over with homo “marriage”. 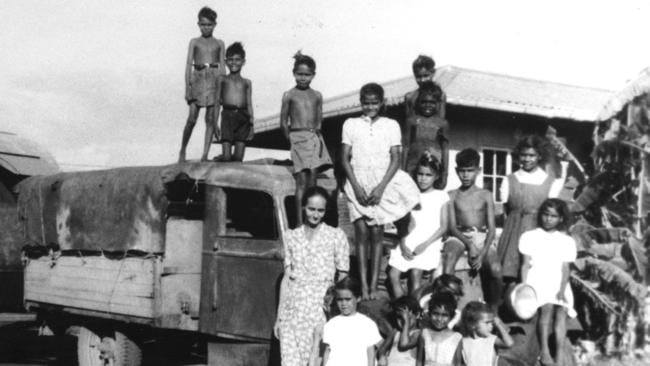 Andrew Bolt Herald Sun May 16, 2021
.
The Australian Museum claims it’s putting on the most important show in its 194-year history. And it’s right: This proves that truth is now officially dead. That is a huge deal for a museum. On Saturday, the Australian Museum will open Unsettled, an exhibition about the “devastation” of colonisation that it says “illuminates the power of truth-telling”. But truth-telling is the last thing to now expect in a museum we funded for generations to promote it.
.
For one, this exhibition treats as true the “stolen generations” – the myth that “generations” of children were stolen from caring parents just because they were Aboriginal.
.
I’ve challenged activists for two decades to name even just 10 such children. Prove they were taken because they were Aboriginal, not because they were neglected, abandoned, abused or sent away to school.
.
But worse is this museum’s fact-lite promotion of atrocity claims.
.
Its exhibition includes a huge map of Australia claiming to show where whites massacred Aborigines. We are asked to believe that in 1921 almost two-thirds of Australia was a massacre site.
.
Next to the map is a photograph of Poisoned Waterholes Creek, near Narrandera, which – as a Sydney Morning Herald preview of the exhibition lazily repeated – was “where Aboriginal people were slaughtered” by “white settlers … around 1820”.
.
No real museum would present such an inflammatory rumor as an unchallenged fact.
.
Blame the creek’s name for firing the imaginations of activists looking for any hint – as one wrote on news.com.au – that “like (Nazi) Germany, Australia has similarly massacred its own citizens”.
.
ABC journalist Stan Grant, who identifies as a member of the Wiradjuri tribe, wrote in 2015 that “the local homestead owner grew tired” of the Wiradjuri resting at Poisoned Waterholes Creek and poisoned their waterhole. Many “died agonising deaths”.
.
But wait: How would a farmer in 1821 get so much poison?
.
In fact, Peter Reed, the academic who invented the deceptive “stolen generations” label, talked in 1980 to Mary Lyons, an 83-year-old Aborigine from Narrandera who claimed the Aborigines actually died from poisoned flour.
.
But is even that true?
.
In 1941, the local Nerandera (sic) Argus complained of a “general belief” that early settlers had “resorted to poisoning the waterholes” around the 1840s but said early settlers it spoke to had no memory of any such killings, and the creek most likely got its name from poison bait left for dingos.
.
In 1951, a George Gow wrote to the Argus to say he’d lived in the area for 57 years and had known people born there 100 years before, but none, he said, thought the poisoning story true. An Aboriginal storyteller he’d known more than 50 years earlier never mentioned it, either.
.
Gow said John Bean, a rabbit inspector who’d worked on the station containing Poisoned Waterholes Creek in the 1880s, told him the name indeed came from dingo baits, although an old drover once said he’d lost cattle there to toxic weed.
Gow blamed Dame Mary Gilmore, a poet and writer for the Communist Party’s newspaper, for spreading the poisoning myth in the Sydney Morning Herald, claiming that a magistrate had investigated and “ordered that the holes be filled in up to a height of 12 feet above the surface”.
.
Gilmore said her uncle did that filling in, but, as Gow noted, the holes are still there. Gilmore’s claims were “rubbish”.
.
And see how Gilmore’s story has changed in the retelling. This happened seemingly around the second half of the 1800s. No, the 1840s. No, the 1820s.
And the water was poisoned, No, the flour. No, water.
.
No names given. No witnesses.
.
But who cares about facts at the Australian Museum, which even promotes Bruce Pascoe as “an Aboriginal writer”, and his book Dark Emu as an “excellent” history? Genealogical records show all Pascoe’s ancestors are of English descent, and when his claim that Aborigines were actually “farmers” living in “houses” in “towns” of “1000 people” is an obvious fantasy based on invented or misrepresented sources.
.
Don’t be surprised that even a museum now treats myths as true in the pursuit of race politics. After all, its director is the first in its long history who isn’t a scientist, but a public relations expert.
.
She’s also been celebrated as the museum’s first female boss. So how natural that the museum now junks science to play instead in the identity politics that is so very marketable?
.
Never mind that it teaches children to despise their country. Only racists now care about facts, right?
.
1/ The Australian Museum holding an exhibition on ‘The Stolen Generation’ proves the truth is officially dead. Picture supplied.

The Real Agenda Behind Aboriginal Recognition