“What happens if all doctors become ill? Hospitals will collapse and won’t open,” 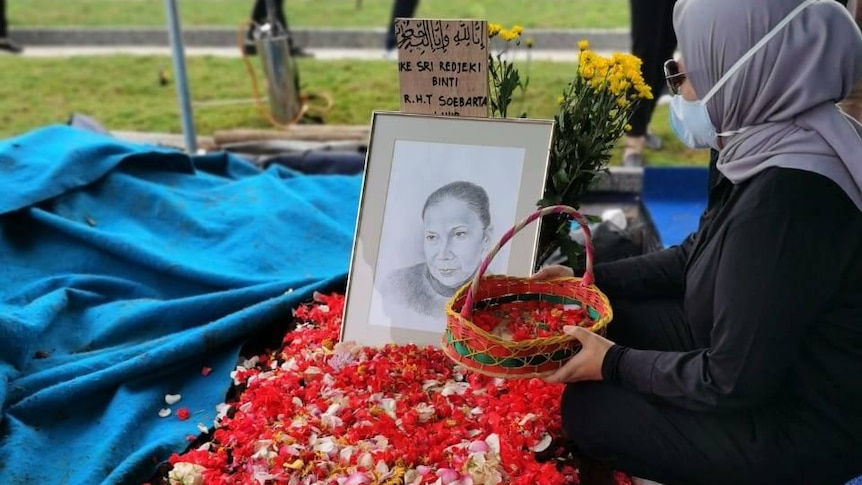 Dr Redjeki is one of thousands dying every month in Indonesia from coronavirus.

JAKARTA—More than 350 doctors and medical workers have caught COVID-19 in Indonesia despite being vaccinated with Sinovac, and dozens have been hospitalized, officials said, as concerns grow about the efficacy of some vaccines against more infectious variants.

Most of the workers were asymptomatic and self-isolating at home, said Badai Ismoyo, head of the health office in the district of Kudus in central Java, but dozens were in the hospital with high fevers and declining oxygen saturation levels. 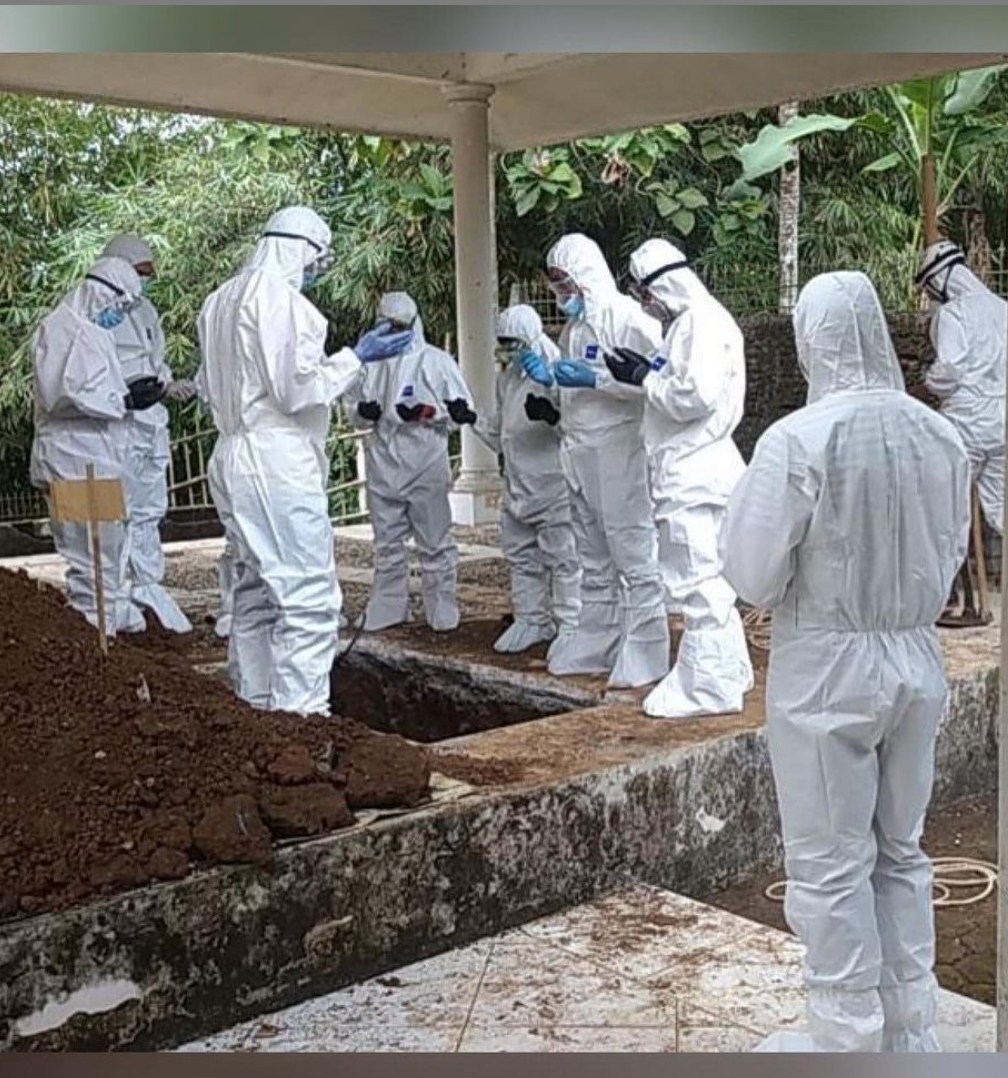 Kudus, which has about 5,000 health care workers, is battling an outbreak believed to be driven by the more transmissible Delta variant, which has pushed its bed occupancy rates above 90 percent.

Designated as a priority group, health care workers were among the first to be vaccinated when inoculations began in January.

(Most people who get Covid, meaning test positive with a PCR test, are “asymptomatic” which means not sick. In other words, it looks like being vaccinated is about the same as not being vaccinated when it comes to getting Covid)

The doctor was one of the inventors of a low-cost portable ventilator, the Vent-I, which was developed amid a nationwide shortage.

But this week, as the country grapples with a post-Eid surge in cases, Dr Redjeki herself died of COVID, despite being fully vaccinated.

“She was the one who came up with the idea to make an advanced ventilator,” said Reza Widianto Sujud, one of her colleagues.

“We were running against the time and we wanted [a ventilator] to be able to be operated by anyone.”

Another colleague, Eri Surahman, said he had worked with her for more than 30 years and remembered her as “a very dedicated teacher”.

“We are very saddened and feel lost without this person who can’t be replaced,” he said.

Dr Redjeki is one of thousands dying every month in Indonesia from coronavirus.

At the Hasan Sadikin hospital in the city of Bandung, Indonesia, Lazuardhi Dwipa has noticed a sharp increase in the number of people presenting to the emergency department over the past month.

“It started from 10 patients per day, slowly increasing to 20, and finally 30,” Dr Dwipa told the ABC.

As of early this week, more than 160 out of 224 beds at the hospital were filled with COVID-19 patients.

“Compared to a few months before Eid, the number of patients of all ages has been increasing … not just the elderly,” Dr Dwipa said.

“We have had cases of young people, in their 30s, who are [fully vaccinated] but still had COVID-19 symptoms and needed to be treated.”

Next COVID epicentre could be on Australia’s doorstep

After wreaking havoc in India, the Delta variant is ripping through Indonesia. As hospitals fill up and authorities refuse to impose hard lockdowns, experts fear the worst is yet to come.

Indonesia’s vaccination rollout is heavily reliant on the Chinese Sinovac vaccine, which has been shown to have lower efficacy than other vaccines.

More than 350 Indonesian doctors and healthcare workers have contracted COVID-19 despite being vaccinated with Sinovac, with dozens being hospitalised, Reuters reported.

The citizen-based reporting platform Lapor COVID-19 said 945 medical workers had already died of COVID since the start of the pandemic.

It’s been a just over a month since Eid al-Fitr, the most important date on the Muslim calendar, and many parts of the world’s most populous Muslim-majority country are seeing ballooning coronavirus cases, putting the health system under strain.

The situation in Bandung reflects a concerning pattern across many parts of Indonesia, which is among the countries in Asia worst hit by coronavirus.

Indonesia has officially recorded more than 1.9 million cases and almost 54,000 deaths since the beginning of the pandemic, and given inadequate rates of testing, the true numbers are likely far higher.

Health authorities have said Delta and other “variants of concern” are now circulating in the country of more than 270 million.

At least 60 cases of the “more dominant” variants had been detected in the town of Kudus, Central Java, where the hospital bed occupancy rate had reached more than 90 per cent, said Wiku Adisasmito, spokesman for the country’s COVID-19 task force.

Hospital bed occupancy this week approached 90 per cent across the Bandung metropolitan area — a city of about 9 million people two hours’ drive from the national capital, Jakarta.

Bandung is the capital of West Java, Indonesia’s most populated province with some 50 million residents.

In the neighbouring province of East Java, the number of coronavirus infections grew by 89 per cent during the first 10 days of June.

But authorities in the provincial capital, Surabaya, appear to be resisting stricter measures to contain the spread.

“We don’t want that to happen again in the city of Surabaya.”

Meanwhile, healthcare workers continue to be undermined by misinformation, which has also spread rapidly in Indonesia during the pandemic.

Lolita Riamawati, the head of a government-mandated community health clinic in Surabaya, said members of her team had been covered in human faeces by a COVID-19 patient’s wife.

“I tried to cheer [the staff] up and reminded them that that was the consequence that we had to face while doing this job,” she said.

“We all cried because we were mentally and physically tired, yet still received this kind of treatment.”

Dr Riamawati said an absence of accurate information about COVID-19 had created a stigma around the disease.

A survey of residents of greater Jakarta conducted in late 2020 found that about one in five people believed that COVID-19 was a “conspiracy formulated by global elites”.

“Communication in public should be made easier to understand with simple explanations, leaving out complicated scientific terms,” Dr Surahman said.

Here’s what you need to know about COVID-19 in Australia:

‘We are afraid of having no orders’

In Jakarta, the epicentre of Indonesia’s outbreak throughout the pandemic, a dedicated COVID hospital has surpassed 5,000 patients.

Videos of people queuing to be checked into isolation wards have gone viral online.

But even as cases surge, national authorities have resisted lockdowns.

The pandemic saw Indonesia last year fall into its first recession since the Asian Financial Crisis in the late 1990s.

For many Indonesians the fear of going hungry is far greater than fear of the virus.

Agnes Rhamawati, a single mother of three, was among motorbike food delivery drivers who crowded McDonald’s outlets earlier this month, raising further concerns over the spread of COVID-19.

As thousands of Indonesians ordered a promotional meal by the K-pop supergroup BTS, Ms Rhamawati said her daily tips doubled during the frenzy of McDonald’s orders.

The driver, who has had her first dose of the Sinovac vaccine, usually makes the equivalent of $6 or $7 for a 10-hour shift.

“We are not afraid of COVID,” Ms Rhamawati said.

“We are afraid of having no orders.”

West Java Governor Ridwan Kamil moved the province’s COVID-19 emergency state to the highest level and announced new restrictions which require 75 per cent of office workers to work from home and the postponing of the re-opening of schools.

“We are pulling on the brakes and trying to control the situation caused by movement during the [Eid] holiday, which created a massive surge,” Mr Kamil told a press conference.

But Dr Dwipa said he was still seeing people not wearing masks correctly and gathering on the streets.

Indonesian bureaucrats to work from Bali The Indonesian government plans to introduce a “Work From Bali” scheme for civil servants aimed at helping to revive the island’s battered economy.

“So we are back to where we were [at the start of the pandemic], but this time the condition is more worrying, why? Because back then people still obeyed the rules … but not now,” he said.

“They have to remember that we are not robots, we are just ordinary humans … so please let’s take care of each other, and think far ahead.”

Dr Dwipa said while he appreciated the government limiting movement and implementing capacity limits for restaurants and places of worship, further “firm action” was needed.

“What happens if all doctors become ill? Hospitals will collapse and won’t open,” he said.

What you need to know about coronavirus: