Thousands of Cubans have taken to the streets in Havana and in other cities to demand vaccines and food as the country faces a period of economic crisis brought on by the global COVID-19 pandemic. People criticized President Miguel Diaz-Canel, saying “down with the dictatorship”, according to the Miami Herald. In a speech addressing the country, Diaz-Canel blamed the United States for the unrest, according to Reuters. 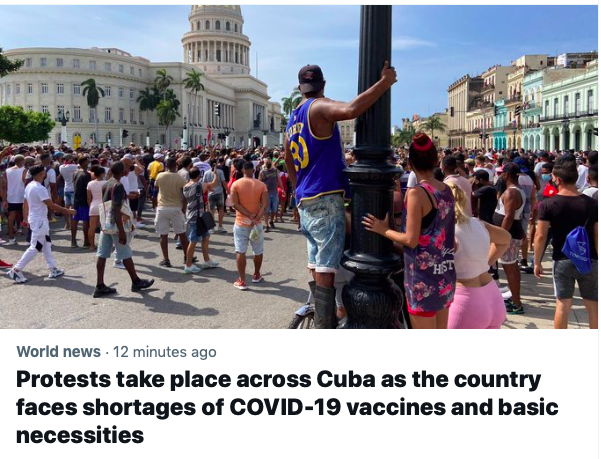 “Shouting ‘Freedom’ and other anti-government slogans, hundreds of Cubans took to the streets in cities around the country on Sunday to protest food and medicine shortages, in a remarkable eruption of discontent not seen in nearly 30 years.” — The New York Times

Protestors flipping the car of a high ranking communist official in Cardenas, Matanzas, Cuba. These protests have popped up all over the island. They are not isolated. This is a movement #SOSCuba #vivaCubalibre pic.twitter.com/8nwQpkvEjn

BREAKING: Thousands protest in Cuba, calling for the end of communist dictatorship https://t.co/xsHflDmyqZ

Cubans take to the street to March for their FREEDOM against their communist Nation. #Cuba pic.twitter.com/DC1TfWRkFm

Why are the Cuban people flying the symbol of white supremacy? https://t.co/F6ZQiZ8x4O