This level of stupid is hard on the brain.

Austria: Interior Minister claims that ‘Islamists are not Muslims’

Next thing, this clown will tell us that “Islamists” are “white supremacists.”

In any case, his asinine statement here once again illustrates the truth of what I’ve pointed out for years: “Islamism” is a concept developed by Western non-Muslims in order to distance Islam from the crimes committed in its name and in accord with its teachings. 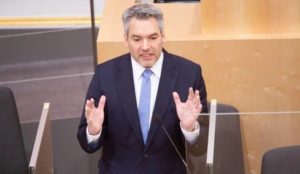 The often martial rhetoric of the ÖVP interior minister Karl Nehammer cannot hide his lack of knowledge. It becomes embarrassing when the minister responsible for asylum, but also for counterterrorism, has no idea about Islamists and Muslims.

In his speech in parliament, Nehammer actually said this sentence:

Islamists are not Muslims.

Did you hear that right? One look, Mr. Interior Minister, at Wikipedia would have been enough not to embarrass yourself in front of the general public. Islamists are the adherents of radical Islam who want to establish a social and state order that is legitimised solely by religion. That this cannot be a Catholic or Buddhist order, but a Muslim one, will be clear to everyone – with the exception of Nehammer.

Info-Direkt editor Michael Scharfmüller has now taken the trouble to explain to Nehammer that every Islamist is of course a Muslim, but not every Muslim is an Islamist. In a video, Scharfmüller tries a child-friendly explanation for Nehammer to make the difference clear to him:

Every car is a vehicle, but not every vehicle is a car. Think about it!

The LBC sycophant who wrote the article below, Seán Hickey, says that the renowned moderate Muslim Maajid Nawaz “expertly debunks” the claim that Islam is “naturally fundamentalist and violent.”

He dismisses the violent passages of the Qur’an not by explaining how, properly understood, they’re not really violent at all, as others have claimed, but by changing the subject and saying: “you can find justification in the old testament and the new testament for all manner of things.” He also echoes groups such as the Hamas-linked Council on American-Islamic Relations (CAIR) in suggesting that those who highlight the violent passages of the Qur’an are just trying to make money: “How ye choose and select and contextualise passages comes down, usually to the own biases we carry, and sometimes we’re funded by those biases.”

If that’s an expert debunking, I’m Chuck Schumer. Nawaz’s claim that “Islamism,” by which he apparently means a form of Islam that takes the Qur’an literally (i.e., is “fundamentalist”) and acts upon its exhortations to violence, only arose with the U.S. aiding jihad groups against the Soviet Union in Afghanistan is completely ahistorical. Nawaz is either unfamiliar with Islam’s 1,400-year history of jihad violence, or banking on his listeners being ignorant of it. Even throughout the first part of the 20th century, before the Soviets invaded Afghanistan, Muslims in Palestine waged jihad against the Jews. It would be interesting to learn what Nawaz thinks of that, and of the Islamic jihad rhetoric that flowed freely from Arab leaders in those days, but of course no one among his sycophants at LBC is going to ask him.

Then we come to the sleight of hand. The Old and New Testaments may be the worst documents in the history of mankind, justifying, as Nawaz says, “all manner of things,” and that wouldn’t tell us one single solitary thing about the violent passages of the Qur’an. Nawaz’s caller asserted that Islam was “naturally fundamentalist and violent.” What the Old Testament and New Testament may be tells us absolutely nothing about that question. Nawaz is just deflecting attention away from inquiry into the actual contents of the Qur’an, and into the extent to which Muslims who commit acts of violence are incited to do so by those contents. Now, why would he want to do that? 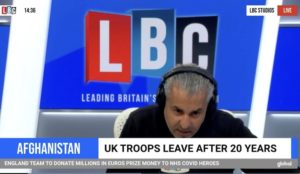 After dismantling a caller’s argument on extremism in Afghanistan, Maajid Nawaz explains how some people’s views on Islam are flawed.

The enlightening moment came after Maajid Nawaz had a run-in with a regular caller who claimed that the idea that the West has destabilised Afghanistan is a “false narrative”. The caller then proceeded to argue that the religion of Islam is a violent faith at its core.

“This idea that Islam as a religion stands alone as being naturally fundamentalist and violent is dodgy,” Maajid said after ending his conversation with the caller.

He argued that the argument “somehow doesn’t stand up – this idea that islam is naturally an aggressive fundamentalist religion, actually no it’s not.

“If you look into the history of the rise of Islamism, as I’ve attempted to explain, primarily it came due to war and in fact it was used by us to stop the Soviet Union.”

He pointed out that miitant Islamism “was used to fight at the time what the Americans called ‘godless communism.’”…

He urged callers to research their topics before calling in to make generalised statements: “You’ve got to know a little bit about the socioeconomic and political factors that gave rise to modern day Islamic fundamentalism to understand that there was nothing inherent about it.”

Arguing against those who reference violent extracts of the Quran to clarify Islam as a violent religion, Maajid pointed out that “you can find justification in the old testament and the new testament for all manner of things.”

“How ye choose and select and contextualise passages comes down, usually to the own biases we carry, and sometimes we’re funded by those biases.” He concluded.